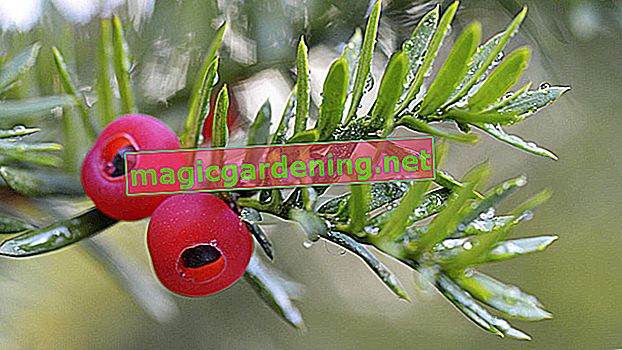 Yew trees are poisonous in all parts of the plant

The botanical name of the yew tree is Taxus baccata. It was given this name because the highly toxic poison taxin is found in almost all parts of the plant. In the case of ingestion there is an acute risk of poisoning, which can be fatal under certain circumstances.

Children who are easily tempted by the red fruits are particularly at risk. The pulp itself is not supposed to be toxic, but the kernels contain a very high concentration of taxine. Not only humans, but also animals such as horses, cattle, donkeys, dogs and cats can poison themselves on the yew tree.

You should therefore not plant a yew tree if small children are using the garden or animals have access to the trees.

What signs of poisoning can occur?

If you suspect that humans or animals have eaten parts of the yew, you should call the poison control center or contact a doctor immediately. Signs of poisoning can include:

Risk of poisoning from the sap

When caring for the yew, for example when cutting, you should always wear protective clothing. Skin contact in itself is not dangerous, but some people are allergic to the sap of the yew tree.

In contrast to other animals, the poison of the yew tree does not seem to harm birds. They like to eat the red fruits.