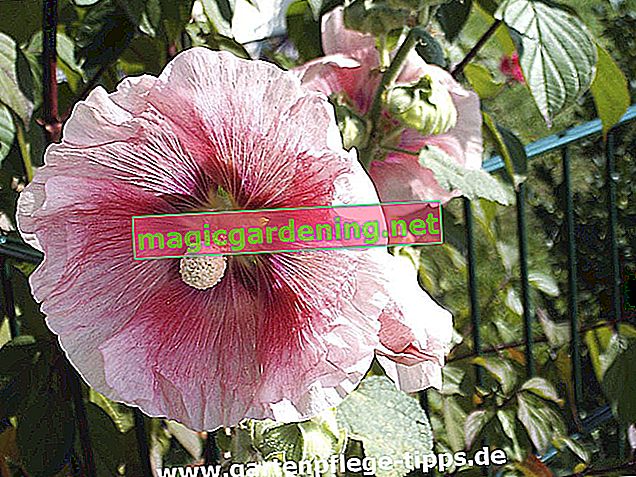 Brown spots on leaves or shoots are usually the result of a fungicidal disease, for which various pathogens are possible. The treatment is carried out by vigorous pruning; if the infestation is severe, it is often necessary to spray with fungicides. The vast majority of mushrooms feel particularly comfortable in damp weather, which is why roses should always be in an airy location - there the leaves can dry out more quickly when it rains.

Downy mildew is noticeable by rust-red spots on both the leaves and the shoots. The problem with downy mildew is the fact that the downy mildew fungus penetrates very deeply into the tissue and is therefore difficult to control.

Rust fungi cause leaf chlorosis (that is, the leaves turn significantly lighter in color to yellow) and rust-colored spots on the leaves. The infected leaves die off and are eventually thrown off, and the whole plant is considerably weakened.

Even if infected with Diplocarpon rosae, the causative agent of star soot, the leaves can turn yellow. More typical, however, are the very dark, rather black spots, which become larger and larger as the disease progresses. Diplocarpon rosae mainly spreads the flight spores.

This disease is caused by the fungus Cylindrocladium scoparium, which initially causes brown spots on the leaves and soon causes them to die. In addition to the leaves, shoots and roots can also be affected, which eventually begin to rot as the infestation progresses.

The main cause of the bark stain is a strong nitrogen fertilization of the roses. The brown to reddish-purple spots appear mainly near shoot buds.

Prevention is better than cure: Plant hygiene is particularly important

Since fungal diseases are very difficult to fight - after all, the pathogens penetrate deep into the plant tissue and can only be removed through a bold cut into healthy wood - you should better prevent an infestation. This includes not only spraying susceptible rose varieties with pesticides in the spring, but also observing basic rules of plant hygiene. Leaves - both fallen and still on the bush - should always be disposed of in autumn, as the fungal spores overwinter on them and thus cause a new infection in the following spring.

Just as important as removing the leaves is regular pruning and thus the rejuvenation of the rose bush. The cutting tool should always be sharp and well disinfected - preferably with high percentage alcohol.