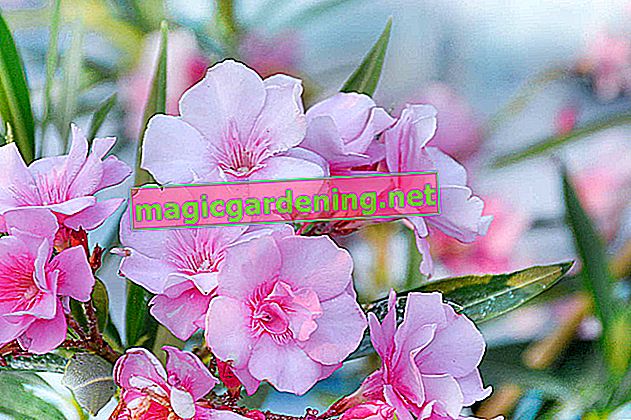 When is the right time to cut the cuttings?

In principle, freshly cut shoots can be rooted all year round, but the success rate is particularly high during the summer months - especially in July and August, the branches that are already in the middle of growth take root very easily. Early spring, just before budding, is also a good time to cut cuttings. After all, the plants are geared towards the formation of new shoots and roots in April or May.

Oleanders can be rooted in two different ways. You can first put the young shoots in the water and let them take root there before placing them in potting soil. However, you can save yourself this step and plant the cuttings straight away - but then it makes sense to first put them in willow water for 24 hours or soak them in rooting powder. Experience has shown that the water method offers a significantly higher success rate.

The oleander cuttings will take root in about four weeks. Now you can carefully place them in a planter with potting soil - be careful not to damage the fragile roots! - and keep the cutting nice and moist. It is best to cultivate it under glass, for example by placing a cut plastic bottle over it. You can either perforate this or ventilate it regularly to prevent mold from forming.

For successful rooting of cuttings you do not need expensive rooting powder, but can simply put the cuttings in self-made willow water or water them with it. The contained auxins promote root growth. And this is how you prepare the miracle cure:

If your oleander cuttings do not want to take root, this may also be due to the wrong water container: Always use opaque containers for rooting or wrap them with aluminum foil. After all, roots emerge in the dark and not in bright sunshine.