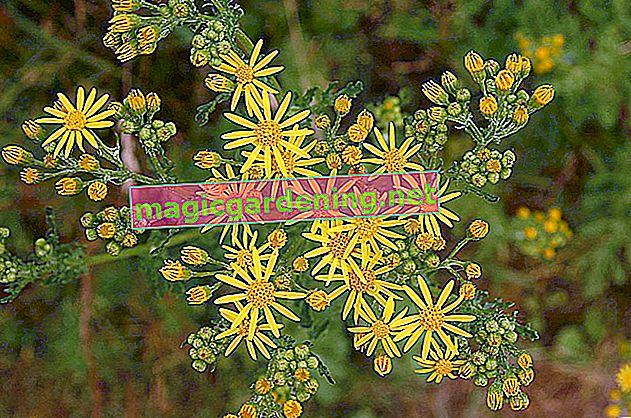 All ragweeds contain highly toxic pyrrolizidine alkaloids, which are both liver damaging and carcinogenic. Particularly high proportions of the poison can be found in the flowers and in young plants. The alkaloids are not directly toxic, but only develop their poisonous effect through conversion in the liver with the help of enzymes. The dangerous toxins have already been detected in eggs, honey, milk and various herbal teas (especially chamomile tea).

The ragwort tastes bitter and is therefore not eaten with pleasure, but only as long as it has not been dried. Dried ragwort - for example in hay - loses its warning bitter substances, but not its toxicity. In addition, slow poisoning cannot be ruled out, as the alkaloids in question gradually build up in the liver and can eventually lead to death. Poisoning can therefore show up even after several months.

Jacob's ragwort is particularly dangerous for humans because of its high risk of confusion with edible plants. The pinnate leaves are very similar to rocket, but the medicinal St. John's wort also looks not dissimilar to the poisonous plant. You should therefore be particularly careful with wild herbs, wild salads and leafy vegetables you have collected yourself, because even small amounts can have serious consequences.

Caution is also required with comfrey (Symphytum), which also contains large amounts of pyrrolizidine alkaloids and is therefore highly toxic for humans and animals.