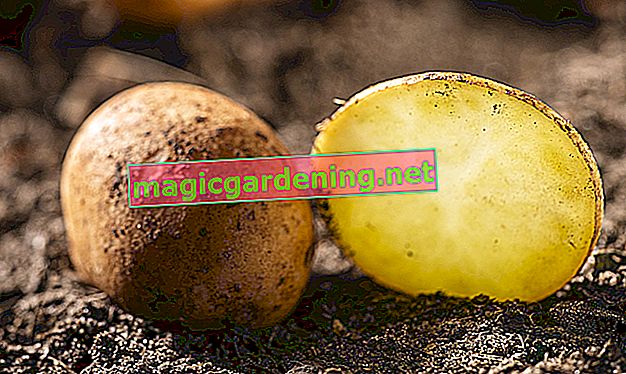 New potato varieties form tubers with a wafer-thin skin. This doesn't interfere with eating, on the contrary. Gourmets even prefer to leave them on because they like the tuber that better.

Immediately below the potato peel are most of the healthy ingredients, most of which are unfortunately removed when you peel them. This is another reason that speaks for leaving the skin on the tuber.

Conventionally grown tubers could invisibly carry substances on the skin that are not good for our health. For example::

Even after thorough washing there will still be remains of it. These tubers should be peeled before eating. To ensure that as many nutrients as possible are retained, this should only be done after cooking. Then the peel can be peeled off thinner.

With tubers that you have grown yourself, you know exactly how they grew. If you've only bet on compost and haven't used any chemicals either, you don't need to worry. If you like the bowl, then you can eat it too.

Potatoes, as potatoes are also called in some regions, are more or less contaminated with earth residues after harvest. The skin of the tubers must be cleaned thoroughly with a vegetable brush under running water before preparation.

The substance solanine, which is toxic to us humans, could also be found in the potatoes. If larger amounts get into our body, nausea, vomiting and headaches are the consequences.

Usually green spots on the skin are an indication of a high concentration of this toxin. However, shells that are not clearly green in color could still contain solanine. However, this is hardly to be feared in the case of very thin, not yet properly formed peel of the new potatoes.