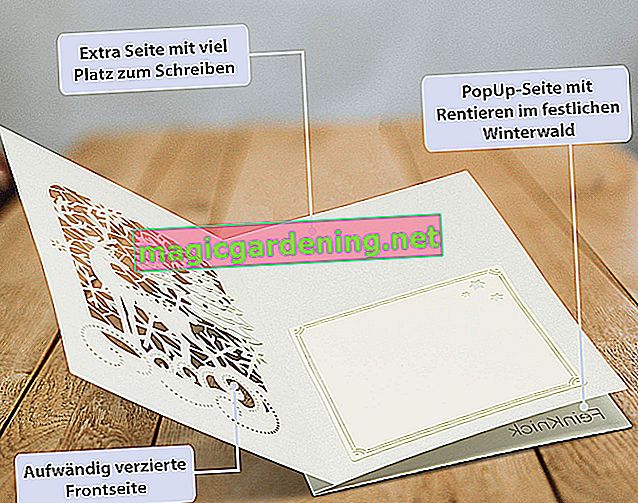 An important cut-relevant difference is that climber roses form a basic framework . Each scaffold shoot has comparatively short side shoots as valuable blossom wood. The first flowers appear on annual and perennial side shoots from May to July. At the same time, this year's tendrils sprout from the scaffolding shoots to enchant with a long-lasting re-bloom.

Rambler roses do without a scaffold . Here the growth is determined by long tendrils from the base with an annual increase of up to 600 centimeters, which bloom from June next year. Without an occasional pruning, climbing roses transform into an impenetrable tangle of old and young, meter-long shoots. The Brothers Grimm certainly had Rambler-Rosen in mind when they described Sleeping Beauty's Castle.

More and more rose gardeners are noting autumn as an additional pruning date. A separate tutorial illuminates the conditions under which it makes sense to cut roses again at the end of the season.

The best time to plant climbing roses is in autumn. This applies primarily to bare-root roses that quickly take root in the sun-warm soil. Roses grown in containers can be put into the ground all year round, but the noble flowers also benefit from an autumn planting time. A plant pruning is advantageous for both cultivation variants because it makes the start of the new location attractive for young climbing roses. Here's how to do it properly:

Climbing roses grown in pots are usually not rooted. An exception applies to root strands with twisted growth that protrude over the edge of the pot or grow out of the floor opening. Twisted roots give a climbing rose no stability and are cut back to the point where it emerges from the ball of the earth. Cut rambler once a year

The reward for an annual maintenance pruning of Rambler roses is an opulent display of flowers in summer. Climbing roses that bloom once were created directly from wild roses. As a result, their long tendrils sprout directly from the base, carry dense clusters of flowers in early summer and inspire with decorative rose hips in autumn. As long as you can reach the vigorous climbing roses without risky climbing sections, you are directing the growth in the desired direction. How to cut properly:

If possible, do not cut back long shoots from the previous year, as these carry most of the flower buds. If you find yourself forced to thin out an aged tendril, cut the shoot into several pieces. In this way, the old wood can be pulled out of the climbing rose better. If in doubt, gentle shaking can loosen the entanglements so that no young tendrils are affected when pulled out. Ramblers that bloom once prove their vigor by occasionally sprouting very long, very thin shoots shortly before blooming. You cut these “fishing rods” back to two to three eyes.

Rank roses that have not been cut for a long time are transformed into an impenetrable network of vital, aged and dead tendrils. Significant weight makes Rambler roses a safety hazard over the years. It is advisable to note a rejuvenating cut on the schedule for once-flowering climbing roses every 5 to 7 years . The best time is in late winter, in accordance with the provisions of the Federal Nature Conservation Act. How to do it right:

When it comes to tapering cuts, you benefit from the flexible nature of rambler tendrils. Young, vital wood, in particular, can be laid on the ground without any problems and then attached again to the climbing aid or the host tree.

When the forsythia bloom in spring, the time window for the rose cut opens. Climbing roses that bloom more often form a stable framework and grow weaker than ramblers. These properties simplify the maintenance of the cut. The primary goal is to encourage numerous side branches. Perennial side branches bloom from the end of May and in August pass the floral baton on to this year's side branches, which bloom until the first frost. With this cut, you'll get it right:

The figure below illustrates what a climbing rose should look like before and after spring pruning. You have done everything right if the scaffolding shoots are reminiscent of a “chicken ladder”. The stepped structure supports the growth of lateral blossom wood and simplifies the formation on the trellis. Vertical rose tendrils become bare below. Budding and flowering only take place at their upper end, because this is where the growth law of peak funding rules. As soon as you tie a tendril horizontally, growth will calm down. Now your climbing rose will find the time and leisure to create numerous leaf and flower buds, distributed over the entire length of the shoot. Tie young rose shoots horizontally at the bottom of the trellis . Older shoots in the upper section direct you to an inclined position . This optimizes the flowers and ensures an even formation on the trellis.

After the first flowering season, there's another rose festival going when you clean out your climbers. The summer pruning on climbing roses is very easy and still achieves a maximum of floral florets until the first frost. This is how you correctly blend climbing roses that bloom more often at the end of June / beginning of July:

Attach this year's growth diagonally to horizontally to the trellis. As a spreader climber, climbing roses do not have organs of attachment or the ability to wind around a strut independently. Please use soft, elastic binding material that does not cut into the bark and can be easily opened for cutting.

Some of the most beautiful climbers react indignantly to the thinning of old ground shoots. If you are subjecting a climbing rose to continuous rejuvenation for the first time, you should carry out a trial pruning. For the test run, cut off a maximum of a third of the aged branches off the ground. If the climber drives out again willingly, remove the remaining old branches next spring. If not, your climbing rose is one of the sensitive varieties. Plant a ground cover rose or a small shrub rose to hide the balding foot. In spring, tulips cover up the aesthetic flaw with their picturesque flowers.

Rejuvenate the climber in stages

Overaged climbing roses age at the tips of the shoots and bald from the base. Instead of scrapping a previously magnificent climber rose, it is worth experimenting with rejuvenation in stages . In gardening practice it has proven to be good practice to spread the measure over 3 years. This is how the plan works:

In the pruning of trees, bushes and roses, the derivation pruning plays a key role. The secret of the fundamental cutting technique lies in the fact that disused branches are strategically diverted to a promising side shoot. On an aged scaffold shoot of your climbing rose, look for a favorably positioned side branch in the lower area. At the fork between old and young, cut off the branched broom.

My climbing roses, which bloom often, are 2 years old and have bloomed splendidly this year. Should I cut the climbers in autumn now or not until spring?

Climbing roses that bloom more often can be pruned throughout the season. The best time for the main pruning is in spring, when the forsythias are in bloom. Regular trimming of wilted flowers attracts fresh rose blossoms. In locations exposed to the wind, it makes sense to prune in autumn so that you can get the roses close to the climbing aid. This reduces the risk of wind breakage to a minimum.

How many individual leaves are there in the leaflets of a climbing rose? On our climber, meter-long shoots as thick as a thumb sprout without branches and with five to seven pinnate leaves. Are they wild shoots?

We planted the often-blooming climbing rose 'Santana' in May. Now in July it blooms for the first time. Does the rose need a climbing aid. Do you really need a cut in the next year?

Climbing roses cannot do without a stable climbing aid. The tendrils do not have their own detention organs, but must be tied up and directed accordingly. As they grow, climbing roses spread their thorn-reinforced side shoots apart in order to interlock with a trellis or a tree bark. In principle, you can let a climbing rose grow uncut. An annual cut in early spring is advantageous for a decorative arrangement on the trellis and an opulent abundance of flowers. If you cut your climbing rose in stages and tie the tendrils diagonally to horizontally, it will quickly green the facade and form flowers over the entire surface.

Are climbing roses suitable for a bucket? How big should the pot be at least?

If a climbing aid is available, you can keep the climber and rambler in the bucket. Another important requirement is an adequate supply of water and rose fertilizer. (€ 11.41 at Amazon *) A bucket should be at least 70 cm deep so that the deep-roots can develop well. As the growth progresses, repot a climbing rose into a larger bucket as soon as the previous container is completely rooted.

Our rambler rose grows in an apple tree that dies as a result of fungal attack. When is the best time to transplant the climbing rose? What is the best way to proceed?

When your climbing rose has shed its leaves, it's time to transplant. Dig the root ball as deep and wide as possible to reduce the loss of root mass. Cut the rambler rose back to 50 centimeters above the ground and plant it in the new destination as soon as possible. Please choose a location where there have been no rose plants in the previous 3 to 4 years in order to avoid the problem of soil fatigue.

The heavy weight of our climbing rose damaged the rose arch. When and how far can I shorten the rose for repair work?

It is easily possible to cut back a climbing rose by up to two thirds. The disadvantage of pruning is the loss of flowers over several years. Two dates are available. A climbing rose copes best with the measure in October or February. If you make the cut before winter, cover the plant with a rose cap made of fleece. So that the lost plant mass can be made up quickly, we recommend applying an organic complete fertilizer such as Oscorna Animalin from April.

If the gardener cuts his once-blooming climbing rose like a more frequently-blooming climber rose, in the worst case all hopes for the next blooming season are gone. If climbing roses stand bald or suffer from diseases, they are also victims of incorrect pruning. The following table summarizes the three most common cutting errors with helpful tips for prevention:

When poor-growing climbing roses are a concern for your gardener, the problem is often with unsuitable folk. Although roses and lavender complement each other wonderfully, their demands on water and nutrient supply differ widely. Phlox, lady's mantle or gypsophila, which are also welcome companions with clematis, are more suitable as underplanting.