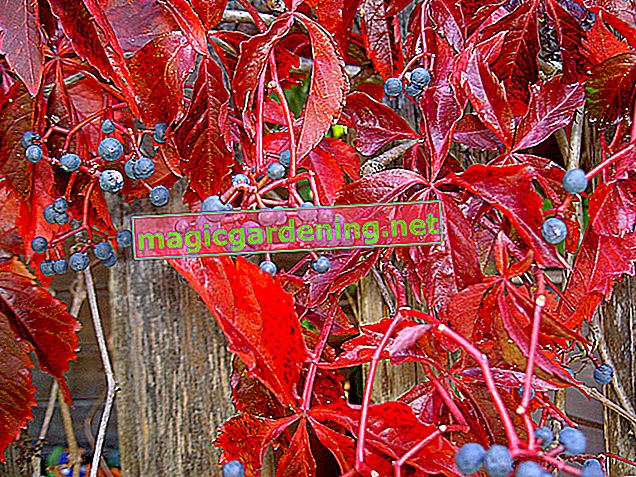 The deciduous three-pointed or three-lobed maiden vines can be distinguished from the other types of wild wine quite well, as their leaves only have three pointed and serrated teeth. In autumn the leaves, which are up to 20 centimeters in size and attached to long stalks, turn a bright scarlet to fiery red. The rather inconspicuous flowers of the three-pointed maiden vines appear as greenish panicles between July and August, the black berries are inedible for humans.

The five-fingered Parthenocissus quinquefolia is also deciduous and, depending on the location, has a very pronounced autumn color, in which the leaves, up to 20 centimeters in size, turn from scarlet to orange-red. The coloring is not uniform, but very different. The inconspicuous, greenish-white flowers appear between June and July. The pea-sized berries that grow from it are very popular with birds, but are inedible for humans. With the exception of the “Engelmannii” variety, this Parthenocissus species has poorer climbing properties than the three-pointed virgin vine and should therefore be used primarily for pergolas, wooden walls, terraces, etc.

In contrast to the other two types of wild wine presented, Parthenocissus vitacea, also known as climbing wall wine or five-leaf wild wine, does not form any or only very few adhesive discs, which is why this virgin vine is dependent on trellises made of wood. Otherwise the species Parthenocissus quinquefolia is outwardly very similar.

Especially Parthenocissus quinquefolia can not only be planted as a climbing plant for greening facades etc., but is also suitable as a ground cover.