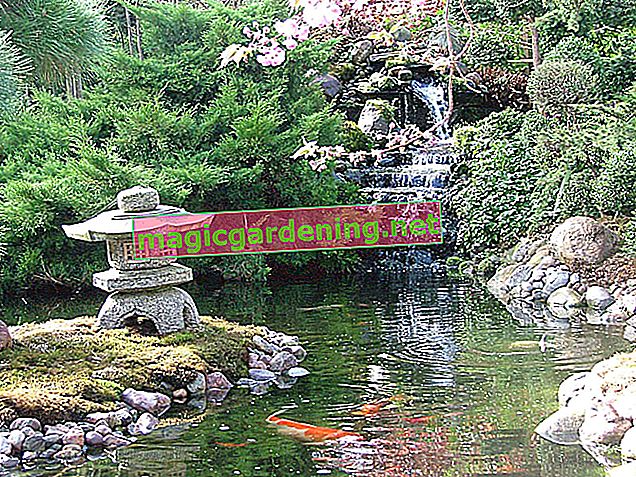 Plants in harmony with Japanese garden design - a selection

An Asian garden is dominated by green in many variations. The focus is on small, evergreen trees that demonstrate durability. As a floral contrast program, the Far Eastern garden design includes selectively blooming plants in order to express the dualism of eternity and moment. The following overview presents recommended species and varieties:

You comply with the guiding principles of Asian garden design when you cultivate the trees primarily as bonsai. In principle, bamboo also belongs in the Japanese garden. However, many gardeners shy away from the vehement urge to spread of the invasive plants. We therefore recommend bamboo screens as an alternative.

Gravel and stones - basic elements in the Japanese garden

If you design a small garden according to the principles of the Asian garden philosophy, there is usually not enough space for a pond or stream. Raked with white or gray pebbles in a wave shape, they represent flowing water. Ideally, use gravel with a grain size of 5 to 8 mm, which you distribute in a layer at least 5 cm high.

Boulders represent mighty dragons in the Japanese garden and at the same time loosen up the appearance. Small stones overgrown with moss round off the lifelike appearance and symbolize the presence of fish or turtles.

An Asian garden according to all the rules of the Far Eastern worldview pulls the viewer under its spell with its small water worlds. If space allows, plan a stream in the slope garden or integrate a pond into the design plan. On the bank, coarse gravel lies decoratively at the feet of isolated plants.

The interplay of controlled and uncontrolled nature is reflected in stone design elements. Lanterns, benches, pagodas or stone steles are popular accessories in the Japanese garden. An economical arrangement is desirable here, because an Asian garden should never appear overloaded.

Filigree metal constructions also conform to the philosophy. There is nothing wrong with setting up a lantern or a metal seat in the Japanese garden. Far away from flammable plants, there is the option of positioning a fire basket or fire bowl in order to enjoy the successful garden design by the flickering fire on mild summer nights.

A garden corner is perfect for creating a zen garden with an integrated seating area. As Asian gardening is not dependent on spacious areas, it gives niches that have hitherto been neglected, creative expressiveness.