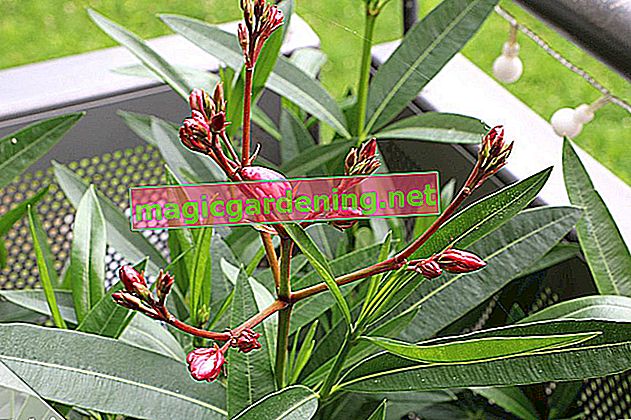 The vegetative propagation of the oleander is particularly easy if you root the cuttings that arise every year when pruning either in a water glass or in lean soil. In principle, all shoots can be used as cuttings, provided they are at least 15 centimeters long. However, rooting works best with young, not yet woody branches. These should be cut between June and September.

Instead of a water glass, you can also put the cuttings in a lean growing medium (€ 9.05 on Amazon *). However, keep the substrate evenly moist and ensure high humidity. You can achieve this by putting a disposable glass or a cut-off PET bottle over the cutting.

Oleander grows very bushy and usually has three or even more strong main shoots. Oleanders are easy to divide the next time they are repotted by cutting through the roots so that each new plant receives at least one of these main shoots. Then plant the individual pieces in new containers. Oleander should be divided as early as possible in the year, before the flowers form - it is best to carry out the procedure in April. Then the divided individual plants have sufficient opportunity to form new flowers and the flowering frenzy does not fail this season.

Oleanders in particular form seed pods if the dead shoots are not cut off. From these you can obtain the seeds you need for breeding, but the seedlings obtained from them will most likely look different from the mother plant - mutations and the emergence of unknown genetic material is not the exception in this type of propagation, but the rule. Since it doesn't get cold in winter in the oleander's home, you don't need to stratify the seeds. Instead, you can sow them right away. However, the best time to sow is late winter or early spring, ie in February or March. The seeds germinate best in an indoor greenhouse in a light and warm location. However, don't lose patienceif after several weeks there are still no seedlings to be seen: Sometimes it takes a while.

The young plants can be converted into a nutrient-rich substrate as soon as they have developed at least one other pair of leaves in addition to the two cotyledons. Make sure that the seedlings are not too close to one another in the seedling tray, otherwise the fine roots can get tangled up and you will not get the young plants transplanted into individual planters without damage.

If you cut cuttings, dead shoots or seed pods on the oleander, you should never do this without gloves! All parts of the plant in the flowering bush are highly poisonous, which is especially true for the milky sap. If it comes into contact with the skin, this can cause irritation (e.g. rashes), but - if the juice gets into open wounds and thus into the bloodstream - it can also cause symptoms of poisoning.