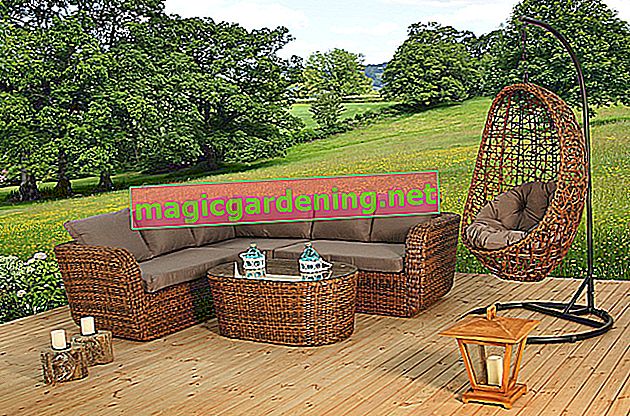 When is the best time to fill the raised bed?

Raised beds can be filled in both spring and autumn, although both times have their own specific advantages and disadvantages. Beds set up in spring benefit from the heat that is generated by the decomposition processes and increases the soil temperature by a few degrees - with the result that these beds can be planted two to three weeks earlier. At the same time, the problem arises with beds that are only filled shortly before the gardening season that they collapse after a few weeks. If, on the other hand, the raised bed was set up in autumn, you can fill it in with filling material throughout the winter: vegetable waste from the kitchen, fallen leaves, grass clippings, shredded cuttings from wood, litter from pet cages, hay and straw ... the raised bed functions as a kind of composter,which decomposes the materials during the winter months.

The different layers of a raised bed

Raised beds are made up of different layers, with coarse and then finer material being used from bottom to top. The individual layers should never be too thick. Grass clippings, for example, are always scattered thinly and loosely into the bed so that nothing sticks together and consequently no mold can form. Spread thin layers of semi-ripe or ripe compost between the individual layers, which inoculates the content with microorganisms and thus promotes faster decomposition of the material. In addition, the filling with fine layers of earth prevents the formation of cavities inside the bed - this can prevent the raised bed from sinking suddenly and sharply.

Structure of a raised bed in the overview

When filling, make sure that the material used is not too dry. A certain amount of moisture - not wetness! - Already when pouring would be ideal, but if necessary it can also be achieved by lightly showering freshly sprinkled layers.

The bottom layer of the raised bed consists of coarse materials such as branches, twigs and even inorganic materials such as stones, rubble or gravel. This first layer is used for drainage and is intended to ensure that excess water can drain off quickly. With the appropriate construction of the raised bed, you can design this layer with flat stones and larger stone slabs so that smaller animals such as lizards, slow worms or bumblebees find a home here.

The next layer basically consists of all green waste from the kitchen and garden: vegetable waste, leaves, clippings, turf and weed weeds (but no root weeds such as ground grass, couch grass, bryos or bindweed!). If you want to use the raised bed as a cold frame in early spring, this layer should also contain an approximately 40 centimeter thick layer of horse manure. But this must be tamped down well before you pack additional layers on top. Horse manure is important for cold frames because it generates a lot of heat.

This is then followed by several thin layers, depending on which filling material you have at hand: grass clippings, semi-ripe compost, animal litter, leaves, chopped wood, garden waste and the like. Between the individual layers there are always thin layers of ripe compost as well as horn shavings (€ 6.39 on Amazon *) and rock flour. (€ 14.95 at Amazon *) These cause the material filled in to create a particularly valuable and nutrient-rich soil.

A layer of good potting soil or very ripe compost is always at least 15 centimeters thick. This layer of soil must by no means be too thin, as the plants cultivated on the bed will otherwise have too little space for their roots and growth will be difficult as a result. When asked which soil should be used, the answer is basically quite simple: Choose a high-quality, humus-rich potting soil that you can mix with ripe compost if necessary. By the way: With bark mulch you can later mulch the plants in the raised bed and thus reduce the weed shooting.

Instead of using coarse vegetable material, you can also use non-rotting inorganic fillers such as stones and stone residues, crushed stone, grit, sand, gravel, expanded clay (€ 17.50 on Amazon *) or granules (e.g. lava) for the bottom layer. These have the advantage that the bed will not sink so much as a result. However, at the same time the proportion of organic green matter is reduced and thus also the proportion of newly formed soil. This means that the plants have fewer nutrients overall.

Under no circumstances should you compost plants in the raised bed that reproduce via their roots or tubers - mints, Jerusalem artichokes and various weeds would even reach the surface from the deeper layers and proliferate there. On the other hand, seed weeds such as the report are not a problem, as the seeds and seedlings usually cannot withstand the high temperatures inside.