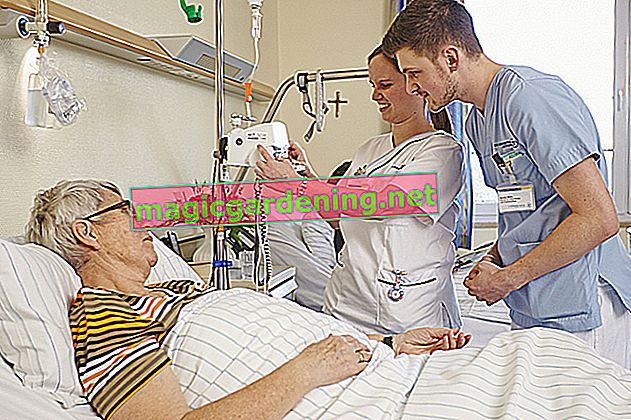 Here in Central Europe, but also in moderate climates in other parts of the world, the shrub is often kept as an ornamental plant in public green spaces and private gardens.

The love pearl bush shows an upright growth with slightly sparse branches. In suitable locations, it can reach heights of two to three meters and can also expand up to two meters in width. Its loose, but sufficiently branched shrubbery make it, apart from its high ornamental value, also a very effective privacy screen at property lines.

The leaves of the love pearl bush have medium-long stems opposite to the branch shoots, which are downy hairy on the tips of the young. They have an elliptical shape that is pointed at the base and end of the stem with a gently sawn edge and are about 5 to 17 centimeters long and 2 to 10 centimeters wide.

The deciduous leaves turn yellow to red-orange in autumn and fall off towards winter.

The flowers of the love pearl bush are also very pretty, but of course they are in the shadow of the really spectacular fruits. The inflorescences are zymös and stand axially in a branched umbel around the shoots. The individual, small, four-fold flowers are light purple in color, from which the honey-yellow glands of the petals that are enthroned above stand out like a foam crown.

The love pearl bush flowers open from the end of June and stay until August. During this time they are only too happy to be swarmed by bees, bumblebees, butterflies and other beneficial insects.

After blooming, the striking fruits appear that gave the shrub its name. They actually look almost like the small, colorful sugar pearls that are traditionally sold as confectionery, especially at fairs.

Like the flowers, the round fruits, which are around 4 mm in diameter, also appear in purple, but in a much stronger shade. They shine clearly, which reinforces the association with the sweet sugar pearls. They hang 30 to 40 hours in clusters of grapes on the branches and are usually pleasing to the eye until December. As a result, the fruit stands are particularly suitable for Christmas, decorative arrangements, bouquets and wreaths made from natural produce.

For some birds, the fruit is also a valuable source of food in the colder days of the year running out.

The love pearl fruits at a glance:

The love pearl bush prefers to be in a sunny to partially shaded, protected location. It should be protected from harsh winds as much as possible and therefore better surrounded by other hedge plants than standing exposed. It has medium demands on the soil - it thrives best on humus-rich, rather loose soils that guarantee good drainage and are still evenly moist. If possible, the pH value should not go into the alkaline range.

The beautiful fruit is generally hardy - the Profusion variety, which is best-selling in this country, is particularly resistant. So you don't have to worry about your shrub, even in freezing temperatures.

It looks different with newly planted young specimens. They are still a bit sensitive to frost, especially in the first winter. If the first winter after planting is particularly cold and brings with it longer phases with strong minus temperatures, you should wrap the young shrub with burlap if necessary and cover the root area with fir branches.

Once a beautiful fruit is established in its location, you don't actually need to water it specially. At most, you can water the shrub properly once in the summer when it doesn't rain for weeks. Otherwise, regular watering is only necessary for the first time after planting a young shrub.

A separate addition of nutrients is also not necessary with the love pearl bush. When planting, however, you can include a long-term supply of gentle, organic fertilizers such as compost or horn shavings (€ 6.39 at Amazon *).

As with most garden trees, the best time to plant a love pearl bush is spring. Then he has enough time to establish himself at his location and to gather some strength before his first winter there.

To plant the shrub, dig a large planting hole and first fill it with a drainage layer of pebbles or clay granules. Fill the main part with a sandy soil mixture enriched with leaf earth and horn shavings, insert the root ball and fill it all around completely. Finally, we recommend a final covering layer with bark mulch, which protects the root ball from drying out and from extreme cold.

A love pearl bush in solitary position is certainly a decorative highlight in the garden. Nevertheless, something speaks in favor of planting several specimens side by side. Because the Callicarpa giraldii belongs to the cross-pollinators, you will get more fruit decorations with a group of several individuals.

When planting in rows, the bushes are set at a distance of at least 200 centimeters from one another.

A cut is only necessary about every three years for the moderately fast-growing love pearl bush. Otherwise, at some point it can look unkempt and bald from the inside.

Make the cut in very early spring, around February or March. You can be relatively radical about this. In any case, remove all old, dead branches and all shoots that are beyond their main fertility. You can determine whether this is the case in the previous year by observing the berry hangings and, if necessary, marking the no longer productive shoots. If some of the shoots are otherwise still visually disturbing due to their excess length, shorten these too.

In the middle of the year you have to reckon with a less abundant abundance of flowers and fruits, but the shrub sprouts more vigorously in the following year.

If you are a big fan of the love pearl bush but do not have a garden available to plant, you can definitely keep a specimen in the tub on the balcony or terrace. Similar things should be observed here as with outdoor planting. So you should be able to offer the shrub as sunny a place as possible in your outdoor area. Make the substrate in the pot as rich in humus as possible and provide it with good drainage made of clay granulate or gravel.

You must of course water regularly when growing in a bucket due to the lower volume of the plant base, but waterlogging should be avoided at all costs. An occasional application of fertilizer in the form of some compost in the spring is good for the bush in the bucket. Caution: In winter, the love pearl bush in the bucket must be separately protected from the cold - it is best to wrap the pot properly with burlap or garden fleece and cover the upper substrate layer with fir branches.

The Callicarpa giraldii can be propagated in two ways: by cuttings or by sowing.

For cuttings, cut young, not yet lignified shoots about 15 to 20 centimeters in length from the bush in summer, preferably in July. Make sure that the shoot has at least two buds. The lower end of the cut can be dipped in rooting powder before setting. You put the prepared cutting in a planter with potting soil, which you cover with foil. A mini greenhouse is even better (6.96 € at Amazon *) to ensure a uniformly moist and protected microclimate. The ambient temperature should not be too warm.

A new love pearl bush can also be grown from seeds. This is possible all year round - however, in phases outside the natural germination period, a pretreatment in the form of a 24-hour soak or a cold stratification is recommended. With the latter method, the shells of the seeds are roughened by storing them and regularly tumbling them in a fine, preferably sterile, peat-sand mixture.

The seeds prepared in this way are placed very deep in a planter with a sandy growing substrate. It is best to keep everything evenly moist under a foil cover or the lid of a mini greenhouse. Place the planter in a bright and warm place at around 20 ° C. After about 2-3 weeks the seedlings should show up. Prick these out as soon as a pair of leaves appears. The young plants are planted out after the first winter at the earliest.

It is particularly important to know, given the naming, which is based on the sweet sugar pearl nibble, that the tempting-looking berries of the love pearl bush are inedible and even slightly poisonous. The fact that birds like to indulge in it in winter could also give some people the idea of ​​trying it out themselves.

However, the berries contain substances that are toxic to humans. These include the terpenoids Callicarpenal, Spathulenol and Intermedeol, which in higher doses mainly trigger the usual natural secretion mechanisms through the body, such as nausea and vomiting. The substance borneol can also irritate the skin.

However, there is hardly any serious risk of poisoning. Because of the strongly bitter taste of the berries, hardly anyone will voluntarily consume the required amount. Of course, caution is not wrong.

The terpenoids contained in the love pearl bush make its parts of the plant inedible for consumption, but they are also known as an effective remedy against mosquitoes and other biting insects. For example, the leaves can simply be grated and applied to the skin.

By far the most popular variety is Callicarpa giraldii 'Profusion'. There are also some representatives of other varieties.

The variety draws its charm mainly from the beautifully looking fruit stands. But the autumn leaves are also quite refreshing, as are the umbellate flowers with their attractive color combination of the delicate purple of the flowers and the honey yellow of the petal glands - this is also the main distinguishing feature from the other Callicarpa species.

The flowers appear in summer from the end of June, the berries then begin to ripen from September. The 'Profusion' variety is characterized by good winter hardiness, but a newly planted shrub should be protected in the first year.

The species Callicarpa bonideri grows somewhat more upright and stringent than Callicarpa giraldii. With this variant, you can expect a height of up to 3 meters. At the same time, the shrub remains a bit slimmer with a maximum of 2.50 meters. In summer from July onwards, the shrub delights with violet to pink-colored flowers that hang in large numbers on long umbels. The resulting berries do not differ from those of C. giraldii in their magnificent, glossy purple color and abundance.

The species Callicarpa americana, which originates from America, shows a habitus very similar to Callicarpa giraldii with a bushy, somewhat sparse growth of up to 2.40 meters in height. The leaves are slightly different with their light green color and felty hair.

Another difference is the much earlier flowering period, which lasts from May to June.

The fruits have almost the same, metallic, shimmering, violet appearance as in Callicarpa giraldii - however, they are not poisonous and even taste good. The mosquito-repellent substances are mainly contained in the leaves and are traditionally used in America for this purpose in cattle.