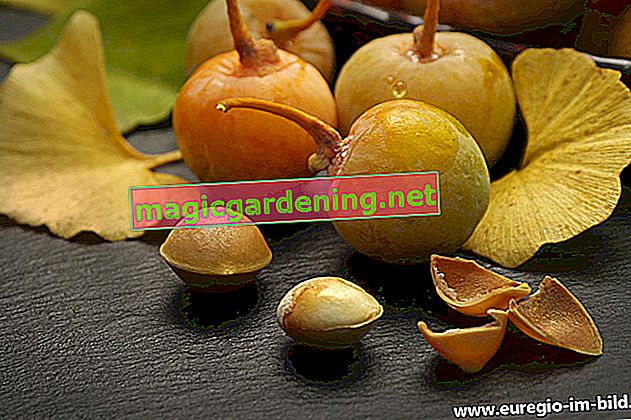 Do all ginkgo trees bear fruit?

Not all ginkgo trees bear fruit because there are male and female trees. The male ginkgo has kitten-shaped flowers, while the female has very small, inconspicuous flowers. After the flowering period, mirabelle-like fruits develop only from the fertilized female flowers. However, this requires a sexually mature male ginkgo tree nearby, without which fertilization is not possible.

When does a ginkgo bear fruit for the first time?

Before a ginkgo blooms for the first time, it takes a lot of time. It does not become sexually mature until around 20 to 35 years of age. So you will look in vain for flowers or fruits on a young ginkgo.

What do the fruits of the ginkgo tree look like?

In shape and color, the fruits of the ginkgo resemble mirabelle plums. They are rounded, about two to three inches long and one and a half to two and a half inches wide. By the time it ripens in autumn, the outer shell is greenish. Before the fruit falls from the tree, it turns yellow. The point in time for this depends significantly on the prevailing temperature.

You can tell when a ginkgo fruit is ripe by its smell. The seed coat contains fatty acids that, when decomposed, smell like rancid butter. Because of this very unpleasant smell, male ginkgo trees are often preferred to be planted. Without fertilization, you don't have to worry about odor nuisance even with female ginkgo.

Are the fruits of the ginkgo tree edible?

Given the unpleasant smell, it is hard to believe that the fruits of the ginkgo tree are actually edible. However, it is better to process or remove the tasty kernels outside of your home. The smell is hard to get rid of. Incidentally, this also applies to stains or splashes on clothing.

Be sure to wear gloves when collecting and uncoiling, otherwise the scent of your hands will remind you of this work for a long time. Soaking the fruit makes it easier for you to remove the outer shell. You can roast the kernels in the shell, but you can also remove them from the cracked shell and then use them.

The most important thing about the ginkgo fruit:

If your ginkgo actually produces ripe fruit, you can try to grow a new ginkgo tree from the seeds.