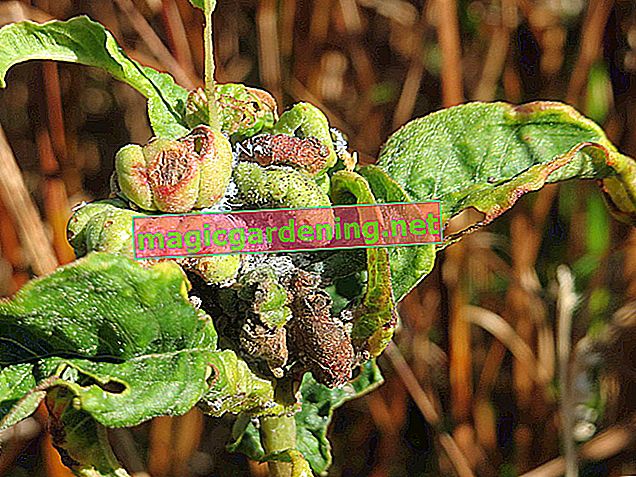 The most common diseases in the cherry laurel are:

You can recognize them by the discolored, stunted leaves or unsightly coverings on the top or bottom of the leaf.

This fungal disease is not only evident in the laurel cherry, but also on the leaves and fruits of plum, peach or cherry trees. The fungus “Stigmina carpophila” is responsible for the infection. So far there are no cherry laurel varieties that are completely resistant to this disease.

The freshly sprouted leaves of the laurel cherry initially show about five to ten millimeters large, red-brown spots on the upper side of the leaf. As the plant rejects the damaged tissue, the holes typical of this plant disease appear in the leaves. If the infestation is severe, the cherry laurel sheds the infested leaves. Shot shot occurs mainly in humid years and in foggy areas with high humidity.

The fungus overwinters in the diseased branches as well as in the leaves and the infected fruits of infected plants. The fungus forms its mycelium on the wounds of the branches, in which the spores form. The spores spread further through winds or showers.

Remove diseased and fallen leaves and dispose of all plant parts in the household waste so that the fungus cannot spread any further in the following year. Cut the cherry laurel back before the next shoot and thin out the bushes so that the wind can blow through the leaves.

You can treat shotguns with suitable fungicides. The agents kill the fungal spores before they attack the plant. Therefore, you have to inject the cherry laurel before the first budding and repeat the application one or two times.

Some cherry laurel species are more tolerant and resistant to the fungal disease. Only plant this type of strain in damp, foggy regions. Wind-open and sunny locations are ideal, where the cherry laurel can dry off quickly after rain showers.

Powdery mildew forms wipeable white to dirty brown coatings on the upper and lower leaves, the young shoots, flowers and fruits of the cherry laurel. As a result, the leaves turn brown and die. In contrast to other fungal diseases, the mycelium of powdery mildew does not grow in the plant tissue, but thrives on the leaf surface. Only the suction extensions (haustoria) anchor themselves in the leaves and remove nutrients from the cherry laurel. Since powdery mildew as an obligatory parasite is dependent on the survival of the host plant, even heavily infested shrubs can live on for a long time.

Powdery mildew is a dry fungus and occurs more frequently on warm days in spring and autumn, when dew precipitation forms at night. In autumn the fungus forms dark, spherical winter fruiting bodies that overwinter in the fallen leaves of the laurel cherry.

The downy mildew spores penetrate the laurel cherry and grow inside the leaf. From here, the spore carriers get through stomata to the underside of the leaf, where they show up as a typically gray-whitish coating. Brown or yellow discolored areas are visible on the upper side of the leaf. The infected bushes are severely weakened and can die.

Immediately cut off the affected leaves and dispose of them in the household rubbish. Do not compost the diseased plant parts, as the powdery mildew survives in the soil and infects other plants when the fertilizer is applied. If the infestation is mild, spraying with milk, field horsetail, garlic or tansy can help to contain the powdery mildew. If this is not enough, you can obtain highly effective fungicides on the market.

An airy location, good exposure, watering in the morning and moderate fertilization reduce the susceptibility of cherry laurel to this fungal disease. Preventive sprayings with field horsetail strengthen the laurel cherry.

The leaf margins of the older leaves turn brown. The leaf gradually dries up and eventually falls off. Heavy infestation can lead to almost complete loss of leaves.

In addition to environmental pollutants, the occurrence of this disease in cherry laurel is directly related to water quality. If the sodium content is too high, this leaf damage occurs frequently.

Only use rainwater for watering.

Unfortunately not possible because the groundwater and air quality cannot be influenced.

If you discover small dark green or reddish brown points on the underside of the leaf to the side of the leaf axils, it is often not a disease at all. From these nectar glands (nectarines) high sugar-containing cell sap emerges, which attracts insects.