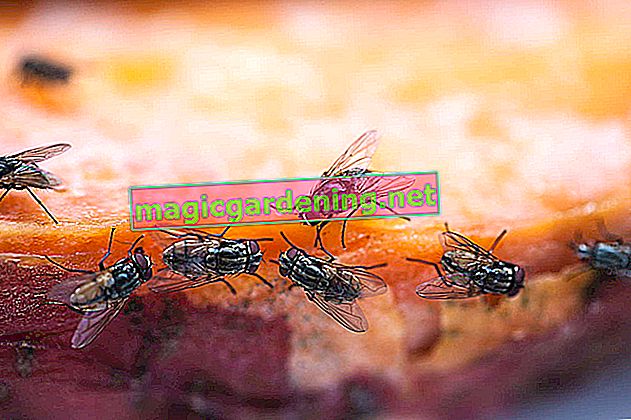 Which insects live in the potting soil?

The small flies that crawl out of the potting soil are fungus gnats. The insects prefer a humid microclimate and lay their eggs on humus-rich soil. The larvae live in the substrate and feed on plant roots. If the infestation is low, this does not harm the plant. However, the roots can die off and begin to rot. Here fungal spores find an optimal breeding ground.

Sciarid gnats grow differently depending on the species. There are mini-fungus gnats that grow to be one millimeter long, while other representatives of this genus reach a height of seven millimeters. Their slim body and wings are dark in color. In some species the females are wingless. The grayish to white larva has a slender body and a black head capsule that is protected by a chitin shell.

After the females lay their eggs, the first larvae hatch within five to eight days. They live socially in groups that can contain up to 2,500 individuals per square meter. The larva spends the next 14 days in the substrate and goes through several stages of development until it pupates. After another seven days, the adult insect hatches, which has a lifespan of five to seven days. Fruit flies in the potting soil?

It is a myth that fruit flies also lay their eggs in the substrate. These insects have specialized in other habitats. The females attach their egg packets to fruit, preferring citrus fruits and decaying or fermenting organic matter. The larvae feed on bacteria and other microorganisms that adhere to the shell.

Flies in the potting soil - what can be done against it?

If the infestation is still in its early stages, you should first eliminate the adult insects. If the fungus gnats become a nuisance, take additional measures. It is always better to use several methods at the same time.

The first measure to contain the infestation is to cover the bare earth. The adult fungus gnats need access to the earth because this is where they lay their eggs. If you cover the earth with a layer of sand or pebbles, the insects can no longer get on the substrate. This avoids the risk of further spread.

If the infestation has not yet progressed that far, you should place some planters with butterwort between your indoor plants. The common butterwort (Pinguicula vulgaris) is a plant native to Central Europe that proves to be extremely easy to care for. It belongs to the carnivorous plants and magically attracts flying insects. Once these settle on the sticky leaves, they can no longer escape. Fatty herbs are a natural and aesthetic alternative to glued yellow boards.

In principle, all carnivores are suitable as natural traps. However, you should prefer plants that can grow in a drier environment. Otherwise there is a risk that the sciarid gnats will lay eggs in the substrate. To be on the safe side, cover the earth with stones for the carnivorous plants. If the infestation is severe, the larvae in the substrate can be fought with nematodes. The roundworms live parasitically and bore into the body of the larva in order to eat them up from the inside. The most popular beneficial insect in this group is the Steinenerma fetiae species. Heterorhabditis bacteriophora has been shown to be more effective in greenhouses. As soon as the sciarid fly larvae are destroyed, the nematodes also die.

This biological weapon is used in a similar way to nematodes. They kill the larvae of the sciarid gnats and are recommended for heavy infestations. Predatory mites only die when there is no more food available. Since they do not specialize in prey, they are used for general pest control. They come in extremely useful when your plants are infected by multiple pests. After about seven to ten days, the beneficial insects have overcome the plague.

A word about fighting with chemistry

Chemical agents effectively destroy larvae and imagos. However, numerous other insects and beneficial organisms are also endangered by the products. If the ingredients get into the earth or into the groundwater, environmental damage cannot be ruled out. Since the chemical club also affects health, such agents have no place in the house or garden.

Home remedies are the first choice when it comes to combating sciarid gnats and other plant pests. However, be aware that any agent can harm the plant. Non-natural substances always pose a risk and also affect the microfauna in the substrate. Therefore, home remedies should only be used with caution and extremely sparingly.

How do yellow boards work?

Yellow boards are made of cardboard or plastic and - as the name suggests - are colored yellow. They are coated with a liquid adhesive so that the landing insects can no longer fly away. The poisonous effect of the adhesive is extremely low, so that there is no health risk when it comes into contact with crops. Many of these adhesives are also used for branded fruit labels.

Numerous insects such as fungus gnats are attracted by the color yellow. However, yellow boards are not suitable for pest control as not all animals are caught. Insects that can continue to mate and produce offspring are always spared. The oil from the seeds of the neem tree acts as a natural poison, because it prevents the formation of chitin and thus inhibits the development of the larvae. The substance azadirachtin is responsible for this. This negatively affects the hormonal balance of the insects. Prepare an oil-water solution in a ratio of 1: 100 and add a little washing powder to the mixture. You can then use it to moisten the earth. You should use the mixture extremely sparingly so that your plant does not suffer any damage. It helps with advanced to severe infestation.

In the event of an acute infestation, you can water your plants with freshly brewed coffee every day for two weeks. This method is not suitable for plants that prefer alkaline soils. Alternatively, you can also sprinkle some coffee grounds on the substrate. Coffee is not only considered a preventive agent against pest infestation, but also has fertilizing properties. Nutrients such as nitrogen, potassium and phosphorus support root growth and promote the formation of flowers and seeds. Sciarid gnats are deterred by the intense aroma.

The leavening agent proves to be effective in destroying insect larvae. Sprinkle the powder on the potting soil and moisten the substrate with water from an atomizer. When the larvae eat the powder, they perish after a short time. You may have to repeat the treatment more often until it is successful. However, baking soda does not harm the plants.

The oil from the tea tree has antibacterial and fungicidal properties. Because of its very strong antimicrobial effect, it is preferred for pest control. Mix 20 drops of the essential oil in one quart of water and water your plants sparingly with the solution. Tea tree oil is good for killing the larvae when the infestation is more advanced.

Many insects and their larvae do not like the scent of essential oils. Therefore, herbs and culinary herbs are ideally suited to frightening away the annoying animals. This method mainly scares off adult insects so that they do not lay eggs in the substrate. The larvae do not die from it. Once the herb's scent wears off, the method must be repeated.

Imagos of sciarid gnats are attracted by the intense vinegar aroma. Fill a container with 125 milliliters of vinegar and place it next to the infested plants. To increase the attraction, you can put pieces of potato or apple in the container. The disadvantage of this method is the unpleasant smell.

Trap types to build yourself:

The belief that matches can kill insect larvae in potting soil persists. There is potassium chlorate and sulfur in the heads. This combination is said to have a deterrent effect on the adult insects and kill their larvae. The imagos can be driven away with a lit match, at least for a short time.

To kill the larvae, the sticks are inserted upside down into the substrate and replaced every two to three days. However, this method has not proven itself in practice. If you still want to try it out, you should only use the matches on sturdy plants.

Fighting the insects with only one remedy usually only provides a short-term remedy. If the living conditions are right, fungus gnats will settle again and again. Targeted prevention is therefore necessary.

Often potting soil is already interspersed with eggs or the sciarid fly larvae live in the substrate of indoor plants. To be on the safe side, you should heat the soil in the oven or microwave before placing it in a planter. Spread the substrate out on a baking sheet, turn the oven to the highest temperature and heat the earth for at least ten minutes.

The larvae die in the substrate if you keep the houseplant dry for some time - provided your plants are not sensitive to prolonged periods of drought.

Sciarid gnats like warm conditions, so they prefer to spread during the heated winter period. Make sure that the room temperature is not too high. The thermometer should hover between 18 and 20 degrees Celsius. If your indoor plants are not particularly sensitive to cold, you can also place them in an unheated room.

Sciarid gnats like a humid microclimate. Make sure that the substrate is not too moist and avoid waterlogging!

What can be done against black flies in the potting soil?

The annoying insects like moist conditions in the substrate. Keep the soil dry and don't water the houseplant for a while. If the insects have spread in the soil of moisture-loving plants, flooding helps. Put the planter in a water bath for some time. The larvae die and the plants don't mind the bath.

Where do flies in the potting soil come from?

The flies are fungus gnats that lay their eggs on the exposed substrate. As soon as the larvae hatch, they hide in the earth for further development. The flies often appear after you have placed your houseplants on the balcony and these have been infected by free-flying sciarid gnats. Bought potting soil or house plants from the hardware store can also be infested by the insects.

Can I protect my plants from fungus gnats?

You can prevent infestation by heating potting soil in the oven before using it. Place a tray filled with soil in the oven for ten minutes. At the highest temperature, larvae and eggs are killed. However, this measure completely sterilizes the earth, so that the natural soil fauna is lost. It is therefore better to cover the bare substrate with a layer of sand. In this way, flying insects have no access to the earth and are prevented from laying eggs.

Are there home remedies for fungus gnats?

The common home remedies that hobby gardeners use against plant pests also help against fungus gnats. However, you should use these products with caution so that your plants are not damaged. Coffee has been shown to be effective in eliminating the plague. A more gentle variant are kitchen and aromatic herbs such as chives, parsley and garlic. Their aromas mourn insects and larvae.