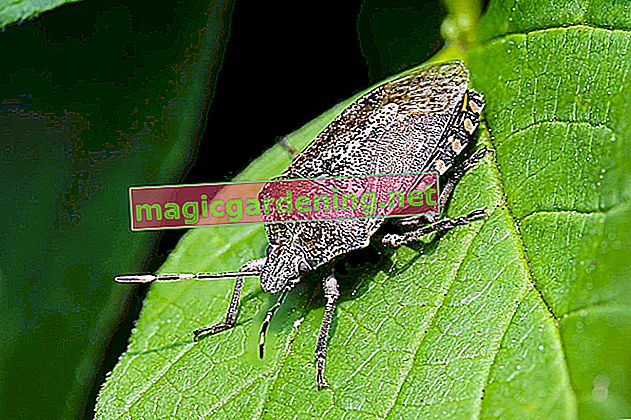 Bed bugs in the house and garden

The gray garden bug (Latin: Rhaphigaster nebulosa) is one of two native stink bug species and - as its name suggests - is mainly found in the garden. In autumn, however, when it gets colder outside and nature is slowly preparing for winter, the animals increasingly seek shelter in apartments and houses. In some years they can become a real nuisance due to their sheer number. But do not worry: the garden bugs do not want to settle down in your home and proliferate there, they are just looking for sheltered winter quarters.

Is the gray garden bug dangerous?

In general, bedbugs have a bad reputation, but wrongly. Of the around 40,000 different species worldwide, the vast majority are completely harmless to humans and animals, including the gray garden bug. The animals are not poisonous, do not sting, bite, suckle blood (on the contrary!) And do not reproduce in large numbers. Eating damage to plants is also mostly limited.

As a result, these bugs are not classified as pests, although they can be quite a nuisance, especially in autumn. They probably owe their bad reputation to the habit of spraying off a smelly secretion when threatened (such as when you touch them). This is supposed to spoil the appetite of predators and thus protect the animals from being eaten. What does the gray garden bug eat?

The gray garden bug feeds primarily on sap, whereby they prefer the sap of deciduous trees. In the garden, the insects are particularly common on fruit trees (e.g. apple and pear trees) and berry trees (e.g. blackberries or wild fruits). They also like roses, perennials and other ornamental plants, as well as some vegetables such as potatoes, cabbage, beans and strawberries. Garden bugs are very nimble and therefore difficult to spot in the garden. They often hide in the grass from where they hunt for the plants. Occasionally, however, the animals suckle other, mostly dead, insects and their larvae.

Risk of confusion with an Asian pest

In contrast to our native gray garden bug, the marbled stink bug (Halyomorpha halys), which is very similar in color, is a major pest both in agriculture and in the hobby garden. The species introduced from China suckles fruits such as apples, pears, grapes, peaches and hazelnuts as well as tomatoes, peppers, corn on the cob, eggplants, soybeans and others with great appetite. As a result, the insect causes great damage to the harvest, as the infected fruits deform and discolour. In addition, there is often a transmission with mold.

In addition, the marbled stink bug can also be found on other plants and damages, for example, ash trees, summer lilacs, rowan berries, etc. The insect seems to have a predilection for rosaceae. So that you can differentiate between the two types, you will find an overview of the respective characteristics in the table. In contrast to the two types of bugs, which are more brownish in color, the also indigenous green stink bug can be distinguished quite well simply because of its color - if you even spot it on a green leaf. Palomena prasina, its Latin name, has a leaf-green color in the summer months that gradually turns brown in autumn. The winter form is uniformly dark brown and has no spots. Thus, the species adapts perfectly to its respective environment and thus camouflages itself from predators. Like the gray garden bug, this species feeds primarily on sap from the deciduous trees and is not considered a pest.

The gray garden bug, like the other types of bedbugs, is common in the summer months when it is hot and dry. Infestation is very likely at this time, so you should regularly inspect your plants and check for traces of bed bugs. Infested plants show the following characteristics:

Normally, you cannot recognize the animals from the smell, because they only give off it when danger is imminent. Don't just look out for the bedbugs, but also for their nymphs - that's what the larvae are called. These also feed on plant juices. They are much smaller and usually darker in color than the adult specimens.

How to get rid of the gray garden bug

"Most bedbugs are harmless and do no harm." (Nature Conservation Association Germany, NABU)

The first rule when fighting the gray garden bug is: never touch the animals with your bare hands! When touched or when you squash them, bed bugs release the acrid secretion, the unpleasant smell of which is very difficult to remove. Therefore, do not kill bed bugs in your apartment - especially if they are on the wallpaper or on a porous wall - because the scent adheres very stubbornly here and you will have something of it for a long time. You should therefore proceed as described in the following section. Bugs that appear in the garden are best combated by simply shaking them off and / or picking them up. Be sure to wear gloves or use aids such as a dustpan with a soft-bristled hand brush. You can also spoil the animals' appetite by spraying the infested plants with neem oil or soapy water (made from washing-up liquid or liquid soft soap). However, these methods do not work on all plants, because you probably don't want to soap fruits.

Alternatively, the insect venom pyrethrum, made from various wild flowers (tanacetum), is also effective against bedbugs, but it is also deadly poisonous for all other insects - and thus also for beneficial insects.

Since bedbugs are so difficult to control, you should avoid increasing the pressure of infestation. These precautionary measures will help:

How do you get bed bugs out of the apartment?

As mentioned, the bugs are increasingly found in the house and garden from around the end of September. Under no circumstances should you collect the animals with your bare hands, but sweep them up with the help of a dustpan and hand brush or collect them in a glass / mug (the tried and tested mug and cardboard method is recommended here). Release the bugs outside, but carefully seal the windows and doors. So that the insects do not even come in, it is best to install an insect screen in spring. This not only helps against bed bugs, but also against all other annoying insectoid visitors.

Way of life and distribution area

The gray garden bug is widespread in Germany, but is more common in central and southern Germany. In the north, however, the animals appear more sporadically. The bugs overwinter as an imago (ie as an adult insect after pupation) mostly en masse in various places, for example in tree bark, in cracks and crevices or in house walls overgrown with ivy.

As soon as it gets warmer in spring, the animals come out of their winter quarters. Now, in late spring, each female lays around 40 eggs on the leaves and shoots of the preferred host plants. The so-called nymphs, which are still wingless, hatch from this within a short time. However, the stink glands are already present and functional. Only one generation of young bugs develops each year.

The following video shows what the eggs of the gray garden bug look like and how a nymph hatches from such an egg:

Can the gray garden bug fly?

Like almost all bedbugs, the gray garden bug can fly, but it is not a particularly skilled flyer. In addition, the insect makes a loud humming sound.

Are garden bugs related to the blood sucking bed bugs?

Garden bugs and bed bugs both belong to the order of bugs (Heteroptera), but are assigned to different genera and families and are therefore not related to each other. While the garden bugs as stink bugs (Pentatomidae) feed primarily on plant sap, the bed bugs are blood suckers belonging to the flat bugs (Cimicidae).

Are garden bugs dangerous to pets?

The gray garden bug is not dangerous for cats, dogs or other pets. Your secretion is not poisonous, it can only burn a little uncomfortably - especially if cheeky pets get it injected in the eyes or mouth.

Stink bugs become active in spring from temperatures of around ten degrees Celsius.