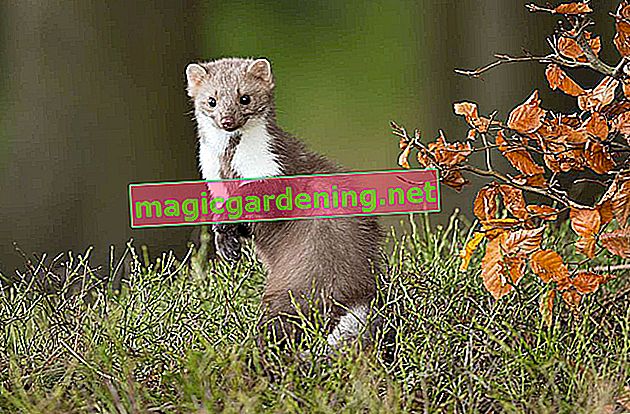 Do martens dig holes in the garden?

Various wrongdoers cause holes in the garden, large and small. Martens are not one of them. Mice, rats, earthworms and other underground garden dwellers are on the beech marten's menu. Admittedly, the predator prefers nighttime hunting on the surface of the earth. Martens are very shy and prefer to keep an eye on their surroundings, which is not guaranteed when digging holes in the earth. Digging is only done when there is a need to break into the chicken or rabbit hutch.

When home gardeners struggle with holes in the garden, other culprits move into their sights. Primarily rabbits, rats and hedgehogs dig small holes. Mole and vole pour a mound of earth over the hole. The fox and badger are responsible for large hollows as dangerous tripping hazards.

How can you spot martens in the garden? Stone martens are nocturnal, extremely shy, quick to react and nimble. These characteristics make a direct encounter with a marten in the garden during the day a rare occurrence. If hobby gardeners suspect the presence of a little robber in their green realm, they focus on various telltale clues. The following table lists important identifying features for the presence of a marten in contrast to cats, weasels and raccoons:

The most difficult thing is to distinguish between martens and weasels. The animals are botanically related and have a similar way of life. For garden, house and car owners, the most important difference is that weasels do not rumble in attics or nibble on car cables.

Sharp eyes and a good nose are required if you want to track down a marten in the garden. Apart from the shape and size of the solution, the legacies of the stone marten are distinguished by recognizable kernels, feathers and hairs. A foul smell exuded by the marten droppings removes any last doubts. In contrast, cats bury their excrement so that a smell is rarely noticeable. Raccoon droppings are said to have a not so strong smell of musk.

Noises as a seasonal indicator

Most of the year martens live solitary and make no noise. Only during the mating season do nocturnal territorial fights in the garden cause turmoil. When male martens fight for the lady of their heart, fighting noises are similar to those of cats, but louder, more deafening and shrill. A thundering rumble in the garden shed (7.70 € at Amazon *) or barn reveals that a female is raising her offspring here, which is always associated with noise for the Marder family. There is a risk of confusion with raccoons who brazenly break into the house at night and plunder the pantry.

As territorial animals, martens are equipped with a gland that produces a secretion to mark their territory. A marten marks its territory in the garden almost all year round with the intensely smelling secretion. This strategy, which is uncomfortable for human noses, is used by both males and females. Scent tags from cats only attack the human sense of smell when a repeat offender is at work. When weasels mark their territory with scents, a weak, marten-like odor is recorded.

Are martens useful or harmful in the garden? Marten do not dig in the garden, do not dig holes, do not eat plants and only occasionally eat berries or fruits. On the contrary, for omnivores there are mainly small mammals and rodents on the menu, such as mice, rats, frogs or moles. Insects, cockchafer larvae and earthworms are also not spurned. A number of pests fall victim to the marten, which the near-natural gardener appreciates and welcomes the nocturnal hunter as a beneficial insect.

The flip side of the coin is a huge appetite for chickens, ducks, and pigeons. Many people resent their fondness for all kinds of poultry and consider the predator a pest. Serious damage from martens in the garden is always to be complained about when livestock is kept in addition to the cultivation of plants.

While martens are even useful in the garden, the little robbers cause damage to vehicles running into the millions every year. To prevent the nocturnal predators from attacking your car, the NABU (Naturschutzbund) recommends placing a wooden frame with wire mesh (€ 14.99 at Amazon *) under the parked vehicle. Close-meshed wire mesh causes painful agony for little marten paws. Regular car and engine washes remove the scent marks with which a marten marks its territory and remembers the way to the vehicle. Help against engine damage caused by a car marten is promised by a special deterrent spray that protects cables and hoses from being bitten for six to eight weeks and then needs to be refreshed.

Martens in the garden - what to do?

Martens are creatures worth protecting. The Federal Nature Conservation Act confirms what animal-friendly hobby gardeners have been practicing for a long time. Chasing away and keeping away is allowed, harm to health or killing is taboo. Various non-toxic options and home remedies are available to emphatically compliment those cheeky pests from the garden. What to do if you want to get rid of martens:

A panacea for martens in the garden has no home remedy. Its use can achieve short-term success, but it is associated with various disadvantages. Above all, the cost factor should not be underestimated, because the duration of effectiveness is limited. The local hunter promises effective help against martens in the garden. As a specialist, he knows how to catch wild animals with a live trap as gently as possible. Furthermore, professional exterminators are allowed to catch martens and release them into the wild at a suitable location. Please note a strict closed season, which extends from March 1st to October 15th.

The water bottle method to chase martens out of the garden or from the car is controversial. Since the agent costs little and works without chemicals, a try can be worthwhile. Fill some PET bottles two-thirds full with water. Hang and place the water bottles in suspicious locations. It has not yet been clarified why martens run away from bottled water.

If you're chasing a marten out of the garden, the house shouldn't offer the refugee any loopholes. Night owls make themselves unpopular as a poltergeist in the attic or in the basement. Seal all openings from 5 cm in diameter with wire mesh, plaster or concrete. Wrap tree trunks close to the house with a marten repellent belt to prevent climbers from entering the house. Martens are clever robbers, skilled climbers and can jump up to 2 meters high. If stone martens invade a garden, they make short work of runner ducks and chickens. It is advisable to secure the site from stone martens before the poultry move in. The following preventive measures provide protection from a marten in the garden:

Martens are not only shy but also resentful. Place motion detectors with a water sprayer in the garden. The device locates the robber and shoots a short, powerful jet of water in his direction. Uninvited nocturnal guests will not forget this horror and henceforth avoid the area.

Are martens dangerous in the garden?

If a marten has chosen your garden as its new home, its presence does not pose any immediate danger to people. Unlike cats or raccoons, neither the animal nor its droppings transmit dangerous diseases. For chickens, ducks, rabbits and birds, however, the predator's presence does not end well. If you can tell from evidence that a marten is in the garden, you should protect cages and enclosures and chase the intruder away. Catching is only an option in winter under the guidance of a hunter or certified exterminator.

We have a dead marten in our garden. What has to be done now?

If a marten dies in your garden, please contact the nearest animal carcass disposal facility. Neither the public order office, nor the police or hunters are responsible for abandoned, dead small animals. Instead of having the carcass picked up at your own expense, most municipalities allow it to be disposed of in the garbage can.

Ultrasound machines only achieve short-term success when you want to get rid of martens, mice, and other uninvited guests in the garden. In practice it has been found that the clever fur bearers wait a safe distance for the noise to end and then return. In the worst case, the animals become deaf as a result of the ultrasonic noises, which is a high price to pay for the nocturnal disturbance of peace.