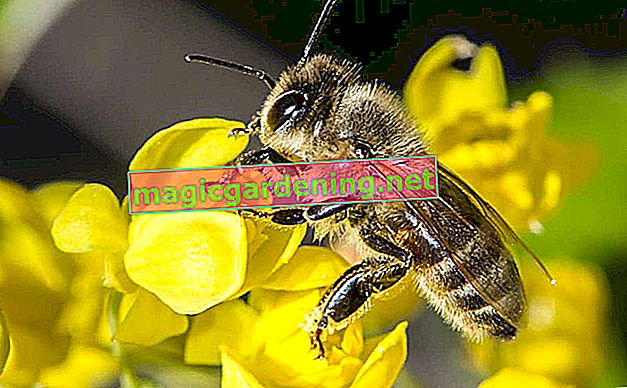 Anyone who wants to distinguish bees from wasps really only needs to look carefully. Because the two insect species do not look so similar at second glance. Both have a yellow-dark-striped abdomen. In the case of bees, however, the dark part is significantly brown, whereas in the case of wasps it is really black. In addition, the body of the bees is clearly hairy and downright fluffy, while wasps appear much smoother because of the lack of hair.

And something else about the body: the wasp waist, which has become proverbial, is of course also a typical feature of wasps: it is significantly narrower than that of bees.

You can also tell quickly from its behavior whether a striped humming bird is a bee or a wasp. Wasps move much more agile and determined than bees and also show a much more daring, more offensive behavior. Completely self-confidently they control the ice cream or the bread and jam in your hand and insist on their right to sweet food. Bees stay much more in the background and rarely appear at breakfast and coffee tables as stubborn, uninvited guests.

Bees also use the dreaded sting less often on humans than wasps. This is mainly due to the fact that you can only use it once. When stabbing you lose your entire lancing device and your life. So it's understandable that they only sting in extreme emergency situations. Wasps, on the other hand, can and do use their sting multiple times. They stun prey insects with their sting poison and thus defend themselves against threats - for example in the form of waving human hands.

Way of life and benefits for humans

Of course, you can only observe the way wasps and insects live and live if they and their state have settled in your area. By the way, states form both bees and wasps. Depending on the species, they choose natural stone walls, roof trusses, earth or tree caves for their nests.

A major difference lies in the nutrition of the larvae. Although you will hardly ever get inside and what is happening in a wasp or bee nest, it is useful to know how the insects feed their brood and accordingly behave outside of their nest. Bees naturally produce honey for their larvae, which we humans have valued for thousands of years. Wasps cannot make the sweet gold - they feed their offspring on insects. This also makes them useful in the garden - because caterpillars of annoying garden pests can also be found under their prey.