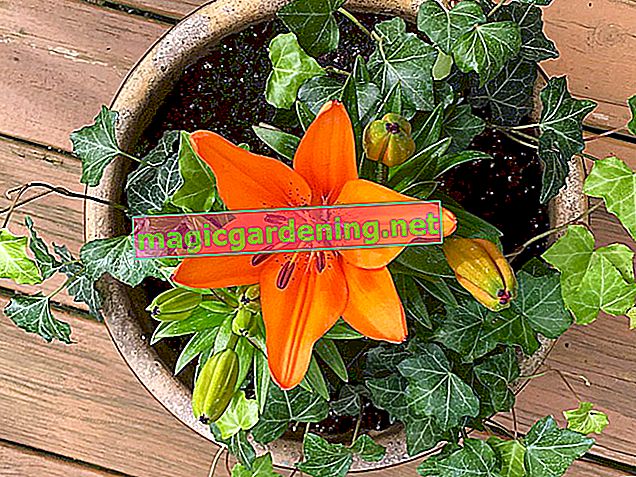 Plant lilies in a pot

The following aspects are important before or during planting:

Lilies don't like blazing midday sun. It can get too hot quickly on a balcony, especially on a wall. A place protected from the effects of the weather in the right south-east or west is best. The flowers of protected lilies last longer.

Conventional potting soil is recommended as a substrate. Alternatively, rhododendron soil is suitable. If you want to mix the substrate yourself, you should pay attention to a loose texture, a moderate sand content, humus and a high nutrient content.

Which varieties are suitable for pot culture?

Smaller lily varieties such as 'Mona Lisa', 'Marco Polo', 'Avignon' and 'Le Rève' are particularly suitable for the pot. But larger varieties such as the oriental lilies 'Angels Dream' and 'Royal Wedding' can also thrive in the pot if it is large enough.

What care do lilies need in the pot?

Do you have to overwinter the potted plants?

Lilies in the pot should not be overwintered outside. It is better to put them in a frost-free place such as in the garage or in the basement. Potted lilies in the garden can be kept in the greenhouse, cold frame or gazebo during the winter.

Anyone who has lilies in their pots in the apartment, on the balcony or terrace and owns cats should be careful. Some cats nibble on the leaves and flowers of these plants. But lilies are poisonous to cats and cause kidney failure.

Repot your lilies once a year to divide them and keep them blooming.