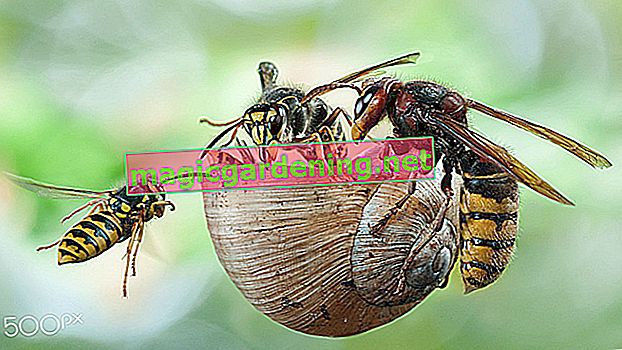 Hornet, wasp or bee? With the help of this table you can quickly determine what exactly is floating around in your garden. In fact, wasps and bees in particular are often mistaken for one another, although they do not have too much resemblance and bees are also much smaller. The hornet - also known as the giant wasp due to its size - is believed by many to be easy to recognize: only the queen is up to three centimeters long, while the workers are roughly the size of wasps. However, you can tell the different species well by their color. The successful mimicry of the hoverflies

But not everything that looks like a wasp or a bee is actually one. In particular, the harmless hover flies - which belong to the two-winged species (Diptera) and do not have a sting - are very successful with their “mimicry”. The different species disguise themselves as bumblebees, bees or wasps by taking on an appearance very similar to these “models” and therefore easily confused. Hoverflies feed on pollen and nectar in a purely vegetarian manner, which is why they play an important role in the pollination of garden plants. However, they do not build nests or form states, but lay their eggs directly on plant leaves. “The” honeybee just like “the” wasp or “the” hornet does not exist. Instead, they are different genera of insects, each of which includes different species.

Among the bees in Germany, the brownish colored Carnica bee, which reaches a size similar to that of wasp workers, is particularly widespread. Especially with some beekeepers, you will also come across so-called Buckfast bees, which are a special breed and whose color tends to be more yellowish.

In their movement, however, bees are more similar to the rather clumsy-looking bumblebees: They are significantly slower than the predatory hornets and wasps. You can recognize them by their characteristic body color and shape. The well-known, alarming black-and-yellow stripe coloration has only the wasps, while hornets are brownish-red in the upper area and only the abdomen can look yellowish.

"Hornets are remarkably large and look dangerous - but if you leave them alone, you don't need to be afraid of these generally peaceful animals."

While bees are very popular with most people, wasps and hornets are not particularly popular - on the contrary, because these animals are often chased away, killed and their nests destroyed. The main reason for this - quite understandable - fear is the bad reputation of both species. Wasps are considered annoying and aggressive, hornets are even deadly poisonous.

However, this is only partially true, namely when in late summer hungry wasps foraging for food allow themselves to be attracted by sweet and savory human food. Bees and hornets, on the other hand, are not particularly interested in our food, which is why you will rarely find either of them at your dining table. The predatory hornets can't do too much with lemonade and cake. On the other hand, bees will only be attracted to your table if it smells of honey there.

However, none of the species mentioned is really aggressive, on the contrary. In any case, only wasps dare to approach humans, while hornets tend to keep their distance. It only becomes problematic if you irritate the animals, for example because you hit them or come too close to their nest. So keep a respectful distance and watch these fascinating creatures. This way you reduce the risk of an insect bite to almost zero.

Correct handling of hornets and wasps

You should therefore not hit wasps, hornets and bees, because the stressed animals give off alarm pheromones, so that the others are also in an alarm mood and react aggressively. For this reason, avoid getting too close to the nest (a distance of at least two meters should be maintained!) Or possibly destroying it with water, fire or smoke. The angry residents do not approve of such behavior on your part and will almost certainly attack you - even days and weeks later. In addition, you should not walk barefoot across a meadow in summer, here you can accidentally step on a bee and be stung

Differences in overwintering and nest building The insects mentioned make up all states that consist of a queen and hard-working workers and male drones. With regard to the size of the state and the location and structure of the nests, however, wasps, hornets and bees differ considerably.

There are other differences in the way they build their nests: The wasp species that are common here prefer to nest in protected, dark places, which are often found in abandoned mole or mouse holes in the earth. This is why these species are popularly known as “earth wasps”. Hornets, on the other hand, like to look for a nesting place high up in the air, which is why their constructions can often be discovered more quickly.

Even if some people may find it hard to believe: The main task of wasps is not to annoy people nearby. Instead, the animals prefer sweet and savory food in late summer because they are starving and have to look after their brood. From August onwards, only a few plants bloom, a large number of which are also unsuitable for food production. Many cultivated plants in our gardens are sterile and produce neither nectar nor pollen or hide them in the filled calyxes so that insects cannot reach them and literally starve to death in front of a set table. Wasps also feel the same way, as they are diligent collectors of nectar and pollen and thus ensure that the flowers are fertilized.

You can find out in this video that wasps are not only annoying at the summer coffee table outdoors, but also take on important tasks in nature:

The predatory hornets, on the other hand, prey on all sorts of insects that make life difficult for you in the garden. So if you have an insect nest in your garden, you don't have to worry about wasps or mosquitoes. Such a people eat around half a kilogram of insects per day, and carrion is not spurned either.

Are hornets more venomous than wasps?

No, because wasp and hornet poison are chemically very similar. Both poisons are only applied to the skin to a very small extent with a sting, since the sting does not get stuck. In stark contrast to that of the bee, which dies after a sting - but leaves its sting and poison bag in the skin. This way, more bee venom penetrates the skin, which is why bees are de facto more toxic. However, only around two percent of the population are allergic, i.e. a negligibly small proportion. For everyone else, such a sting - regardless of whether it is from a bee, wasp or hornet - is painful but harmless.

Why do bees die after a sting, but wasps and hornets don't?

Since the stinger has a barb, the stinger gets stuck in the skin and the bee's abdomen is torn off. The animal dies as a result, but has given its life for its people - by stinging the attacker. Wasps and hornets, however, do not have such barbs, which is why their stings do not get stuck and the animals therefore continue to live.

All the insects presented here are under strict nature protection, so that you are not allowed to catch or kill wasps, hornets or bees. Removing nests is also prohibited.