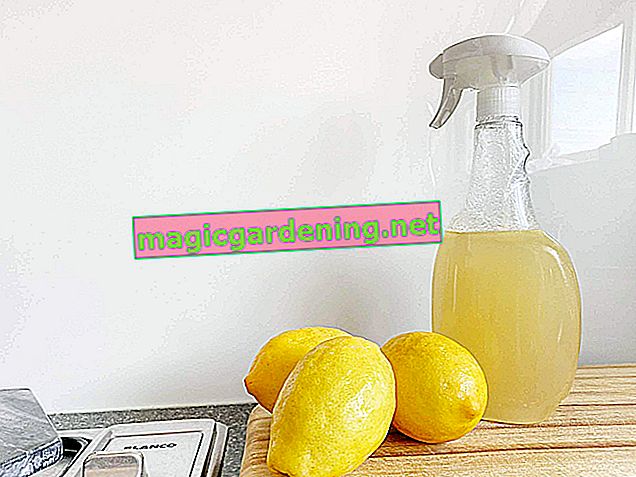 "A weed is nothing more than an unloved flower." (Ella Wheeler Wilcox, American writer)

Almost everyone has a bottle of apple cider vinegar or vinegar essence at home, after all, the acid is very versatile both in the kitchen and in the household. You not only season food with it, but also remove limescale deposits from the kettle and bathroom and can even use it for cleaning - which in turn makes expensive chemical cleaners completely superfluous.

In the yard and garden, too, the old home remedy should do a good job of removing weeds and at the same time protect the environment. But is that really true? Does vinegar actually help against weeds? In this article, we will explain whether and what is true of this tip - and why it is better not to attack your flower beds with vinegar.

For plants to grow healthily, the acid-base value - the so-called pH value - must be in balance. Since vinegar is an acid, it acidifies the soil and damages the cell membranes of the plants. This is why the household helper in the garden is not entirely harmless as long as you use it undiluted and in high concentration.

A small dash of vinegar on a jug of irrigation water, on the other hand, only lowers the pH value slightly and has no negative effects on weeds and other plants. In this way, however, you can make hard water softer and neutralize lime - which is not always desirable in irrigation water. Vinegar is actually advisable for this purpose, but less so as a weed killer.

If highly concentrated vinegar gets into the ground, it not only corrodes the roots of the weeds. Neighboring crops are also affected, so that both can no longer absorb water and consequently dry up. In addition, the soil acidifies when using vinegar, which is why you have to counteract the drop in the pH value with regular lime additions. All these side effects prohibit the use of the product, for example in the vegetable patch or in the flower beds - you would then have to dispose of both together with the weeds. These are the benefits of vinegar against weeds

Many hobby gardeners prefer old home remedies such as vinegar and salt, as these are supposedly more environmentally friendly than chemical herbicides. In addition, various brands based on vinegar are available in stores for a lot of money, which is why the vinegar essence seems to be a good alternative for cost reasons alone - after all, the effect of the commercial products is the same. So at first glance, vinegar appears as:

The disadvantages speak against an application

No question about it, the advantages of vinegar are convincing. However, the acid also has a number of disadvantages that speak against its use. The most important counter-argument is the acid, because it gets through the soil into the groundwater and everywhere destroys the balance between acids and bases. To use vinegar effectively against weeds, you would have to apply larger amounts - and they always have a negative impact on the environment. Other disadvantages are:

The effects and disadvantages described here naturally also apply to certified vinegar-based herbicides from specialist retailers. Although it is often advised to use these instead of household vinegar, after all they have been tested and therefore safe, but that is window dressing.

Is vinegar allowed as a herbicide in the garden?

Especially since the use of vinegar in the garden - especially in connection with salt - is also a delicate matter for legal reasons.

For a long time, vinegar and vinegar essence were used as pesticides if they were used against weeds and other plants. For this reason, their use on paved and otherwise sealed surfaces was prohibited. Ever since the Oldenburg Higher Regional Court collected this classification in a 2017 ruling, vinegar is no longer considered a herbicide - i.e. a pesticide, but it may not be used indefinitely in the private sector. Both the chambers of agriculture and the environmental protection agencies adhere to a ban on the use of vinegar to kill weeds, especially on non-cultivated land (terraces, garage driveways, parking lots, etc.) and justify this with a violation of Section 3 of the Plant Protection Act - a "violation of the good professional Practice". Such can be punished with a fine of up to 175 EUR.

This is not about illogical harassment, but has solid reasons: Vinegar is only biodegradable in small quantities and quickly ends up in the groundwater. However, this is not wanted by the sewage treatment plants, as residual vinegar cannot be filtered out and also permanently changes the pH value of the water.

In view of the current legal situation, vinegar should never be used on paved or otherwise sealed surfaces. The remedy has no place in the vegetable patch either, after all you want to eat your harvest afterwards. In general, before each use, check whether there is still a better remedy without undesirable side effects - you will find a few of them clearly presented in the table below in the text. However, if there is no alternative to vinegar, use the old home remedy as described in this chapter.

You can get different types of vinegar in the supermarket, each with a different concentration. Conventional table vinegar, for example, contains up to six percent acetic acid, while vinegar essence is considerably more concentrated with a content of up to 25 percent. This concentrated acetic acid can cause chemical burns if improperly handled - not only on plants, but also on your skin. Therefore, in the event of use, you should strictly observe the following safety instructions:

Apple cider vinegar, which can also be used to remove weeds in the garden, is considerably milder. However, that does not mean that this type of vinegar is less harmful to the environment. You should not use vinegar more than twice a year and only in a concentration of 100 milliliters of table vinegar in one to two liters of water. This amount is also the maximum amount that can be applied per square meter of area. Incidentally, the self-mixed weed killer works better if you boil it before use and pour it hot over the weeds. In this way you combine the action of acetic acid with the thermal. Also add a few dashes of detergent to the mixture so that the vinegar mixture does not simply roll off the leaves.

It is best to apply the vinegar in sunny and dry weather, because rain would simply wash the agent off the leaves. In addition, the sun intensifies and accelerates the effect on the weeds to be eliminated. You can see this very nicely in a direct comparison between weeds growing in sunny and shady locations: With shade plants, it always takes a few days longer for the leaves to turn yellow and finally dry up.

Incidentally, vinegar can be saved well by cutting off the above-ground parts of larger plants and simply dousing the remains with the solution. In this way, you need much less of the agent and thus protect the environment.

Advice on applying vinegar against weeds

The following tips are also helpful when using the vinegar:

Vinegar against weeds in the lawn

To get rid of weeds from the lawn, vinegar is a poor choice. You should only treat the unwanted plants themselves - preferably with a brush - and under no circumstances should the grasses directly adjacent to them. But since this is practically impossible - after all, some of the acetic acid always gets into the soil and the grasses absorb it - your lawn will wither and dry out as a result.

Which is why you should better avoid vinegar and salt

The combination of vinegar and salt is touted by some hobby gardeners as an insider tip against weeds - but be careful! If the use of vinegar is a legal gray area, then the use of salt in the garden is strictly forbidden and can be fined up to 50,000 EUR. The reason for this is as simple as it is obvious: Salt not only changes the pH value of the soil, it also puts the groundwater at a massive risk. In addition, nothing will grow on a salty soil - and your garden will gradually mutate into a desert. So our advice: stay away from salt!

No matter how you turn it: The best and most environmentally friendly method against weeds is and remains the good old weeding or shuffling. Of course, such work is unpopular, time-consuming and arduous, but remains without any alternative. The following video with tips for weed control without chemicals shows how much work the mechanical removal of weeds from the garden takes:

The following table gives an overview of other effective but environmentally friendly alternatives to a homemade weedkiller made from vinegar and salt:

Better than laborious work to combat annoying weeds, however, are preventive measures that considerably reduce the pressure of infestation and thus give you more time to relax in the garden:

I've heard that baking soda is also great for weed control. Is that correct?

Our grandmothers used baking powder to tackle stubborn weeds. To do this, mix two to three packets with five liters of water and pour the mixture over the plants to be removed. But be careful: firstly, the trick does not work with all baking powders, but only with baking soda and secondly, this remedy does not differentiate between weeds and crops: it simply destroys all of them, and it also has an adverse effect on the pH value.

My grandma recommended Cola for the weeds in the paving stones. Does that actually help?

In fact, because of the phosphoric acid it contains, cola is an effective means of removing moss from paving joints, for example. The disadvantage, however, is that the agent is extremely sugary and therefore sticky. So you save no work because you do

Even if it is called Epsom salt, there is no salt in it. Magnesium sulfate is not suitable for killing weeds, on the contrary, it even provides them with valuable nutrients. After all, it is a fertilizer that is mainly used on lawns.

Instead of a Bhutan burner, you can also use infrared devices to light the weed areas. These weed burners are available from well-stocked specialist shops.