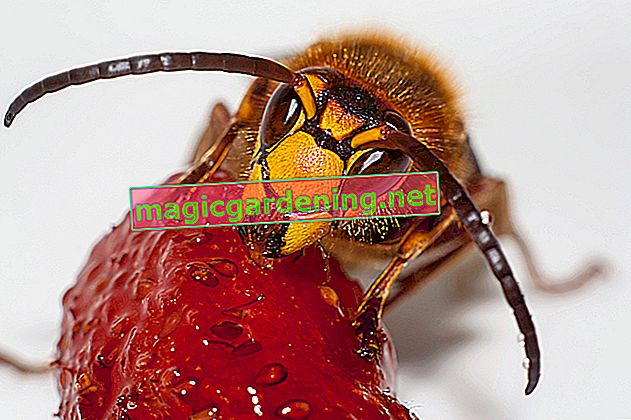 In fact, hornets are not only on the move during the day but also at dusk and at night. According to a study in which the movement patterns of the animals were recorded with the help of a sensor and a camera, the giant wasps fly more often at dusk between 7 and 11 p.m. in summer. After that, the flight activities level off somewhat, so that there are only a few animals on the way in the deep night and into the early hours of the morning - however, the nightly activities do not come to a complete standstill.

This means that hornets are active both during the day and at night, which in turn distinguishes them from their relatives - the various wasp species - as well as from bees and bumblebees. These insects only fly during the day and spend the night in their nests.

Why do hornets fly at night too?

There are several reasons for these nighttime activities. One is that the hornet larvae have a great appetite for protein-rich food and are therefore also taken care of at night - not as often as during the day, but there are no real periods of rest in the hornet's nest. Such a hornet state consumes around half a kilogram of insects a day in its late summer peak! And since the state is not particularly large with an average of 400 to 700 animals, you have to hunt at all times.

Furthermore, the endangerment from enemies at night - hornets are a sought-after prey for many birds - is lower than during the day, and food competitors (again birds) are inactive at this time. There are plenty of nocturnal insects such as the moths mentioned above. Moths and other nocturnal insects are attracted to light like magic. This also applies to hornets flying at night, which are always based on available light sources and can therefore get lost in the apartment in summer. Like all nocturnal insects, hornets orient themselves in the twilight or darkness to the brightest point of nature, the moon. This appears to be motionless in the sky and is therefore very suitable as a fixed point: the insects always maintain an angle of approx. 40 degrees to the moon and thus manage to fly straight ahead. In contrast to during the day, the animals do not see particularly well at night.

If, however, an artificial light suddenly appears - such as a lamp or lantern - the insect takes this as a point of orientation and flies to the light. Unfortunately, such light sources are much closer than the distant celestial body and are therefore not suitable for the correct determination of the flight path. However, the hornet does not know this and ends up in your apartment in no time at all.

Hornet flies into the apartment, what to do?

Now the hornet is suddenly buzzing around in your apartment and cannot find its way out. Please do not grab your slipper or a newspaper now to kill the animal - hornets are firstly rare and secondly are protected. The animals must neither be killed nor caught, as stipulated by the Federal Nature Conservation Act (BNatSchG). For the same reason, auxiliary measures such as insect spray or hairspray are prohibited, especially since both represent a very painful form of killing for the animals. But don't worry, with a simple trick you can still lure the hornet back outside:

After a while the hornet will orient itself towards the new light source and fly outside again. Now close the window and only then switch the light on again. Alternatively - and if you are feeling very brave - just wait for the hornet to settle on an easily accessible surface. Now quickly put a glass over the animal and slide a piece of cardboard over the opening. Carry the jar outside with the hornet and release the insect there. How to keep hornets out of the apartment

However, you can also reliably prevent the animals from wandering around by closing the window openings with insect screens. This also has the advantage that in summer you can switch on the light with the window open and you do not have to fear an invasion of nocturnal insects. Hornets also do not like the scent of certain plants and avoid them. So place the potted plants listed below on the windowsill:

Furthermore, hornets are not particularly fond of tomatoes and incense, but both species are usually too big to be kept on the windowsill. But they are well suited for a pot culture on the balcony or terrace.

Do you also know the old saying “three hornet stings kill one person, seven a horse”? It is an old wives tale without any truth. In fact, hornets are quite peaceful animals and leave you alone as long as you don't make hectic, wildly waving movements or even attack them around them. Hornets are neither interested in humans nor in their food (in contrast to common wasps). The sting is no more dangerous than that of a wasp or a bee, only those allergic to wasp venom need to be careful. Since wasp and hornet poison are chemically very similar, reactions can occur here.

When do hornets fly?

“Hornets scare many people. But that is completely unnecessary, as these animals are not very aggressive and tend to flee. "

The hornet year begins, depending on the weather, between April and May, when the queens emerge from their winter quarters and start looking for a suitable nesting site. The first workers do not fly out until June because they have to hatch and develop into an adult animal. The hornet colony finally experiences its high phase in late summer, when around 400 to 700 animals may populate the nest and then there is hectic activity there.

From around the end of August until September, the male animals, called drones, as well as the newly hatched young queens fly out on their wedding flight. In October, at the latest in November, the last workers, the old queen and the drones die. During the day, hornets have two high flight phases in which the animals are particularly busy: the first phase is at noon, the second at dusk until the early hours of the night.

This very nice article by a beekeeper explains how a hornet's life works and provides further interesting information.

In view of the fact that hornets are practically on the move day and night during the summer months, the question arises whether the animals never sleep? In fact, it seems that the giant wasps do not need any sleep or rest. In any case, neither the workers nor the drones live very long: these animals last a maximum of four weeks, while your queen is the only one that can live around a year. This short span must of course be exploited, which is why sleep is superfluous and only robs life. Only in the very early hours of the morning there are sometimes very brief standstills in the nest, where almost all animals pause for about half a minute to a minute and no longer even move their antennae.

What do hornets do in winter?

Almost the entire hornet population dies in autumn. All that remains are the young queens hatched in late summer or autumn, who look for suitable winter quarters after mating. The animals like to dig into the ground, but also use piles of wood or hollows. Many a hornet has already overwintered in a pile of firewood and then woke up early in the living room when the wood was carried to the fireplace.

What do hornets do in cooler weather?

Basically, hornets are more often on the move on warm and sunny days, while flight movements decrease sharply on cooler days. The reason for this is the fact that both the workers and the drones “heat” the nest on such days. To do this, the animals huddle together in the center and generate warmth with tiny movements of their wings. So busy, of course, they have less time to go out hunting.

There's a hornet's nest in front of my window. How do I get rid of this?

First of all: You are not allowed to remove the nest yourself, not to smoke it out or to kill the animals in any other way. Hornets are protected, which is why you need a good reason and an official permit to remove the nest. You can usually apply for this at the lower nature conservation authority in your community. In addition, the nest should always be relocated by a specialist.

Hornet, wasp or bee: how do I differentiate between the individual species?

Hornets are the largest wasp species in Central Europe and also have a striking yellow-reddish color. These two characteristics alone make it easy to distinguish them from their relatives, the wasps. Bees, on the other hand, are even smaller and also more brownish in color.

How can I drive away hornets?

They are not allowed to kill, trap, or damage their nest with hornets. However, you can try to prevent the queen from building nests in the spring or drive the animals away by gentle means. Some essential fragrances are very suitable for this purpose, for example clove oil, lavender or lemon balm oil. In the spring, pay more attention to whether you see a hornet queen flying in and out of somewhere. If so, she'll build her nest there. Seal all entry holes at this point, of course only when the animal is outside again.