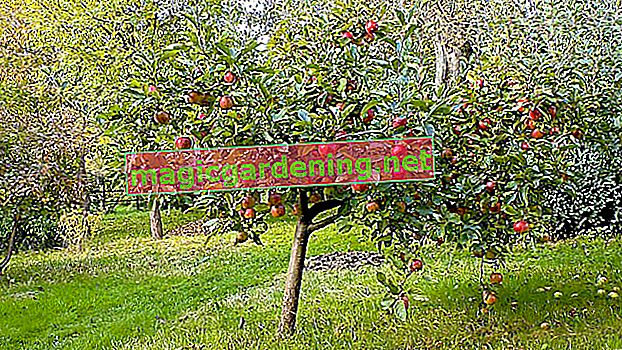 The main cut in winter

The most important time for the annual pruning of apple trees is winter. If the branches of the apple tree are cut back between January and March, this is very well tolerated by the tree due to the winter dormancy and only low tree sap circulation. When cutting in winter, however, make sure that thick branches do not leave any interfaces with an exactly horizontal orientation. In this accumulated water, the cut edges and the tree bark would continuously burst open during frost, thus opening the door for a possible fungal attack and other diseases. With winter pruning, edible vines can also be obtained from the water shoots at the top of the tree crown for variety propagation by grafting.

The summer pruning at the apple tree

Strongly growing apple trees in particular can tolerate an additional cut in summer. The water shoots and, in particularly rich bearing years, excess fruits can be removed if they are too numerous to support the branches. However, the summer pruning should not take place during a persistent heat wave with great drought, as otherwise the apple tree could dry out due to the many interfaces. In any case, you should water the apple tree extensively after a cut in summer. The pruning in summer is also a good opportunity to correct errors in winter pruning and to ensure that fruit-bearing branches protrude at least at an angle of 45 degrees from the leading branches.

The cut of the apple tree in autumn

The last attempt can be made in autumn to start the next season with a vital apple tree. At this point, undesirable parts of the tree such as these are ideally removed:

After the cut in autumn, there are also other care measures for the apple tree. A lime coating can protect the tree trunk not only from pest infestation, but also from temperature-related cracks in the bark. Apple trees that are still young can most easily be dug up and relocated in autumn if sufficient pruning is carried out at the same time.

A time with rather mild temperatures should also be selected for winter pruning. When it is neither particularly warm nor cold for the time of year, the apple tree can handle pruning best.