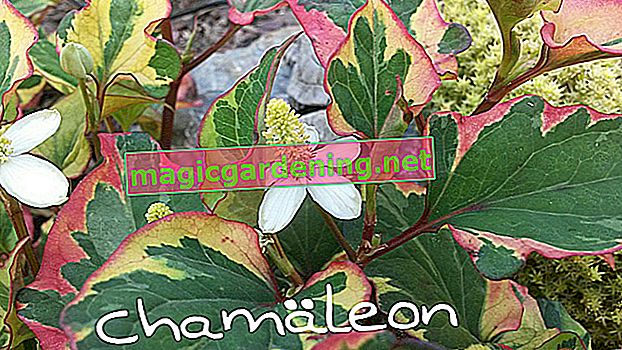 We mainly cultivate the Aglaonema commutatum indoor plant, which is at home in the tropical forests of the Indonesian island of Sulawesi and the Philippines. In the tropical countries of Asia, the distinctive foliage plant is also popularly planted in parks and gardens, but in our country it can only be used as a houseplant due to the unsuitable weather conditions.

The evergreen cob thread grows bushy as a subshrub. It forms upright striving stems that can be between 40 and 50 centimeters high. Together with the leaf mass, the whole plant can grow to heights of up to one meter and the same width over the years. Such specimens naturally need a correspondingly large amount of space. As a houseplant, the cob thread rarely blooms and hardly ever produces fruit.

The alternately arranged and broadly lanceolate leaves of the cob thread can be up to 30 centimeters long. Depending on the variety, they are also rather wide or narrow. However, the plant works mainly because of the particularly appealing grain of its leaves: The mostly silvery-white pattern is different in the different cultivated forms: While some varieties only develop light lines on medium to dark green leaves, others are almost exclusively silver with minor ones green shares. The large leaves of the cob thread should also improve the room climate and have an air-purifying effect.

The inflorescences of the cob thread appear only rarely in indoor culture and often only after many years. They are characteristic of the arum family, to which the genus belongs botanically, and consist of a greenish bract - the so-called spathe - and the white flower bulb. Compared to the strikingly patterned leaves, however, the flowers are quite inconspicuous. The typical flowering time is between June and September.

In the natural habitat, the single-sexed inflorescences develop into conspicuous, red berries on the cob. In indoor culture, however, this happens very rarely due to the lack of fertilization.

Like all arum plants, the cob thread is poisonous and should therefore only be cultivated out of the reach of children and pets. All parts of the plant contain saponins and small amounts of hydrogen cyanide, and leaking sap can cause skin irritation.

The popularity of the cob filament as a houseplant results not only from the attractive color of the leaves, but also from the fact that the plant can cope very well with comparatively little light. For this reason, the species also adorns darker room corners, but needs a high humidity of more than 60 percent and a lot of warmth all year round. During the summer months, the ambient temperature for the cob thread is at least 20 degrees Celsius, in winter, however, it must not be cooler than 18 degrees Celsius. For these reasons, a partially shaded to shady location in the bathroom (but only in those with a window!) Or in a heated winter garden is perfect. Place the cob thread here in a place with a lot of space - the plant appreciates a free stand.In addition, if possible, the plant should not be moved once a suitable location has been found.

Cultivate the cob thread either in hydroponics or in a soil culture in a loose, well-drained and humus-rich potted plant soil. Make sure that it does not contain any peat.

When potting the ornamental foliage plant, make sure not to choose the plant pot too large. In any case, the piston thread grows very slowly, so that it should only be necessary to transfer it to a larger vessel every two to three years. Good pot drainage is also important to avoid waterlogging:

Repotting is best done in spring, removing the old soil as much as possible. Be sure to leave a watering edge free, this will make watering easier for you later and prevent water from spilling over. You can also put the cob thread annually in fresh substrate, then you no longer need to fertilize the plant. A new pot is not always necessary.

As a typical shallow root, the cob thread needs a wide rather than deep plant pot.

Alternatively, the cob thread can also be maintained very well in hydroponics, which further reduces the already low maintenance effort. If possible, buy plants that have already been grown in hydroponics for this purpose, as the conversion from soil to hydroponics is more difficult the older the plants are. Therefore, you should only accustom young specimens, whereby you have to remove all substrate completely. The best time for this is before the new spring shoots, ergo in late winter between February and March.

The soil of the cob thread should be kept evenly slightly moist, but never wet - this inevitably leads to rot. Since the plant, like so many tropical plants, is very sensitive to lime, you should only use water that is low in lime and room temperature for watering. Stale tap water or soft rainwater is ideal. Furthermore, optimal care includes regular spraying of the plant with lime-free water. This measure can be omitted during the winter months, and you can also significantly reduce the amount of water given.

Since the cob thread does not take a real winter break, you should fertilize it all year round. Between April and October, you feed the houseplant once a week with a commercially available liquid container plant fertilizer. A variety for green or leaf ornamental plants is best suited for this. During the winter months, you only care for the plants every two to three weeks.

Basically, cutting measures are not necessary, but you can stimulate the cob thread to branch more strongly by cutting back correctly. To do this, cut off individual petioles to just below the lower eye. Then dust the cuts with charcoal powder to prevent fungus and other pathogens from entering. When cutting the poisonous arum plant, it is essential to wear gloves and long clothing, as the sap can cause skin irritation and even eczema.

If you can't have enough of the pretty decorative foliage plant, you should multiply it. There are three different methods for doing this, all of which are quite uncomplicated and quickly lead to offspring.

When repotting in the spring, you can simply divide large specimens of the cob thread into two or more individual pieces and plant them separately in pots. Each new plant should have at least one bud and three leaves. The subsequent care is the same as for the adult plant - a special culture in the indoor greenhouse or similar is not necessary.

In June you can cut off healthy, strong side shoots and use them as cuttings. These should be about ten to 15 centimeters long and each have at least three leaves. Remove all leaves except for the top one and place the shoots in small pots with a nutrient-poor growing medium. (9.05 € on Amazon *) Now keep them warm at least 25 degrees Celsius and always slightly damp in a bright, but not directly sunny place. A high level of humidity is also an advantage for rapid rooting, which is why the plants are best kept in an indoor greenhouse or under another transparent cover. In this case, however, do not forget to ventilate the room every day!

Older cob threads develop so-called adventitious plants during the summer months, which are small daughter plants. Leave them on the mother plant during the autumn and winter months and separate them together with the roots in the course of repotting in the following spring. Then plant the young plants separately in pots with fresh, humus-rich substrate.

Since the cob thread should be cultivated warm all year round, special measures for wintering are not advisable.

The cob thread is quite insensitive to diseases and pests - provided it is cared for correctly and according to its needs. Wilted leaves, for example, are a clear indication of a lack of water, which can be remedied by more frequent watering. Brown leaf spots and / or rolled up leaf margins, on the other hand, indicate insufficient humidity (especially if only the leaf tips turn brown) or excessive solar radiation. When it comes to pests, spider mites, thrips and aphids are the main problems for the cob thread.

Create a real jungle in the living room with a selection of attractive ornamental foliage plants that have similar needs to the cob thread. For example, single leaf, Dieffenbachia, Asplenium or Chamaedorea are suitable for a communal culture.

There are 23 different types of cob thread, all of which are native to tropical Asia. Aglaonema commutatum, which comes from the Philippines and the northeast of Sulawesi and is characterized by a large number of cultivated varieties, is primarily used as an easy-care houseplant. The different varieties of the species differ mainly in their leaf decoration, which can be silver, yellowish, reddish or multi-colored variegated. In addition to these, other species such as the smaller, bushy growing Aglaonema costatum or the particularly beautifully drawn Aglaonema crispum are in culture.

The most beautiful butt thread varieties