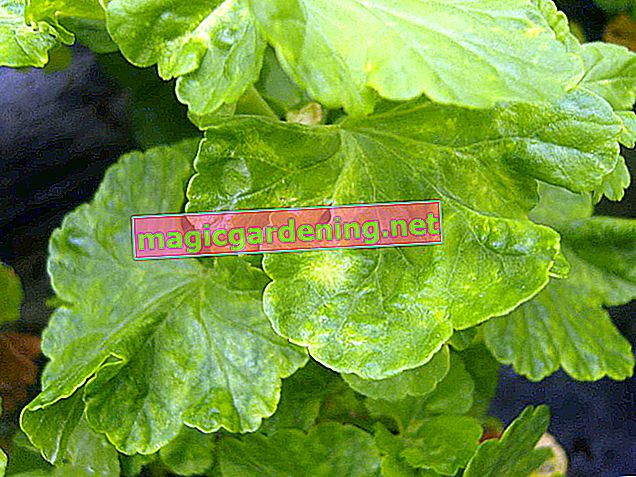 Codling moth infestation can be easily recognized by the holes that are just a few millimeters in size, which the larvae eats into the delicate skin of the unripe fruit. It typically eats its way in a spiral from the outside in to the core, which is also affected. The feeding tunnels and core are contaminated with brown piles of faeces, both of which are clearly visible when the apples are cut. Apples that are infected early usually fall off early.

What can be done effectively against codling moth?

In the event of an acute or threatened codling moth infestation, biological or natural control methods are recommended, as chemical sprays also threaten the harvest - after all, these are toxins that you would later consume with the apples. In addition, many insecticides are generally not approved for use in home and hobby gardens.

Pheromone traps are less suitable for direct control of codling moth, but give a very good impression of the actual infestation. In addition, you catch the male moths, which as a result can no longer fertilize the eggs of the female animals - ergo no offspring hatch.

Pheromones are sexual attractants that are coated in a glue trap that is coated with glue. The male butterflies confuse the scent with those of the females, stick and can then be collected. And this is how the system works:

By the way, you can inquire at your local plant protection office when the codling moth start laying their eggs.

Today I was out in an orchard and came across a pheromone trap for codling moth. That reminded me of how I picked up the pheromone dispensers and gave me the following thoughts. Plant protection products (PPPs) are effective and easy to use. But how about other means of protecting plants? If you don't just want to rely on pure organic, then integrated pest management would be the best solution. This would make your own business more sustainable and environmentally friendly. Pheromone traps themselves are a very good method for controlling and monitoring the number of pests such as the codling moth. With the confusion method, the communication system between male and female individuals of an insect species is immediately disrupted.Spreading a scent cloud over a large area with a pheromone ampoule confuses the male insects, reducing the size of the next generation. Just don't forget to change the traps in good time. #alinaquality #obstbau #apfelwickler #pheromonenfalle #integrierterpflanzenschutz #psm

The time window for a treatment with granulosic virus preparations like Madex is very tight, however, as you have to catch the newly hatched fruit maggots on their way to the apple. This hike only takes a few days, which is why precise control of flight times using a pheromone trap is so important. The flight peak is usually between mid-May and mid-June, which is why treatment with this biological agent is also carried out at this time.

Granulose viruses work effectively against codling moths, but are harmless to bees and other beneficial organisms - not entirely unimportant in fruit growing, after all, these insects are supposed to fertilize the apple blossoms. And this is how the preparations are used:

Take the treatment on a dry day that is neither raining nor windy. Both have a negative impact on the result.

Nematodes of the species Steinernema feltiae have also proven to be effective against hibernating codling moth larvae. These are tiny roundworms that invade the larvae and kill them with a bacterial infection. And this is how the method works:

This is how you prevent an infestation by codling moth

As is so often the case, targeted preventive measures can prevent the worst infestation. The basis for success is knowledge of the life cycle and the biology of the codling moth in order to find the right time.

One of the most important preventive measures is to encourage beneficial insects and birds, because they love the codling moth - and many other pests - to eat. Make your garden bird-friendly, for example by hanging up (cat-safe!) Nesting boxes, setting up feeding places in winter and a bird bath in summer. Sparrows, various types of titmouse, blackbirds and other songbirds will be happy to settle down with you.

In the case of insects, these species are particularly effective predators of the codling moth: In particular the parasitic wasps of the species Elodia tragic, Ascogaster quadridentatus and Trichogramma enecator have proven to be good control agents. They are available from specialist dealers. The beneficial insects are attached to small cards that you simply hang between the branches of the apple tree. This should be done as early as possible in the year so as not to let the infestation pressure get so great in the first place.

The barky bark of older apple trees in particular offers codling moths perfect hiding places in winter. Therefore, you should treat these preventively:

In contrast to the frost wrench, on the other hand, glue rings have no effect on the codling moth and are therefore not a suitable method for prevention or control. Instead, you can try this age-old farmer's trick, which also offers other advantages:

Between January and April you should regularly check the trunks of your apple trees for overwintering codling moth larvae or their pupae. Shake the trees because the animals will fall to the ground and can be collected. Infested fruits should be removed as early as possible during the growing season to prevent further development of the fruit maggots.

The adult moth is very small with a length of only one centimeter and also has an inconspicuous color. The gray-colored upper wings (forewings) are provided with wavy, dark transverse lines, in addition there is a red-brown spot characteristic of the species on the outer edge. The slightly glossy hind wings are colored gray-brown in color. Male and female animals hardly differ from each other in appearance.

The whitish, only about one millimeter long, individually deposited eggs hatch initially up to two millimeters long, whitish caterpillars. These change their appearance in their further development and are later pink and up to two centimeters long. The dark warts and the dark brown head and neck shield are also typical of older caterpillars. The brown pupa, on the other hand, is also quite small at around eight to ten millimeters in length. In order for countermeasures to be successful, the type of pest on the apple tree must be determined. There are some species that are quite similar to the codling moth in appearance and / or damage. However, these are sometimes fought with different means and / or at different times than this one. The following table provides an overview with clear distinguishing features. The codling moth - sometimes also referred to as the apple moth - threatens the fruit tree harvest almost all over the world. The species mainly attacks apple trees, but does not stop at pears, quinces, peaches or even walnuts. Depending on the region and therefore the climate, the pest can run through up to two generations per year and thus multiply very quickly.

This is typical, for example, for the Lake Constance region, but also in other parts of Germany the codling moth occurs earlier and more frequently. This is due to the increasingly warmer temperatures in spring and summer, which create ideal living conditions for the butterfly to develop. The flight time, for example, has moved forward significantly, as spring begins earlier and earlier with mild temperatures.

The larva of the codling moth - which is also known as the fruit maggot - overwinters under the bark of the apple tree, where it is embedded in a solid web. As soon as the temperatures are warm enough, usually from the end of April, the caterpillars pupate and hatch as adult moths from mid-May.

Only a little later, the female animals lay their 20 to 80 eggs in the still young fruits. Two weeks later, the first larvae hatch and go to the food source: The animals feed on the peel, the pulp and the pips of the apple - the latter is a clear indication of codling moth infestation, as the larvae of other pests don't do this.

After three to four more weeks, the caterpillars have eaten enough and go to the trunk of the apple tree to weave themselves into the bark and hibernate there. The growth of codling moth larvae is strongly dependent on the temperature: If it is cooler than ten degrees Celsius, the eggs and larvae do not develop. However, after a warm spring and summer, two or even three generations of the pest develop and cause huge damage.

The codling moth is preferred for egg laying and nursery - of course - apple trees of various varieties. However, the species can also be found on other types of fruit, especially in climatically warmer regions. Above all, the following are at risk:

If the weather conditions are so favorable in a year that the population and with it the infestation increase by leaps and bounds, this strong increase will drag on over the next few years. During and after a warm, dry year, preventive and combative measures must be carried out with special care.

As a rule, fruits that are infected early must be sorted out, whereas those that are infected late can often be used at least partially. In this case, cut away the damaged areas in the apple generously. However, these fruits can no longer be stored.

What is the confusion technique and how does it help against codling moth?

The pheromone traps already mentioned serve to confuse the situation. Although these are well suited to catch the peak of the codling moth flight and thus the right time to spray, they only have a minor influence on the population and thus the infestation pressure.

Neem is effective against many fruit pests, but not against codling moth.

Are there any effective home remedies for codling moth?

Instead, you can use vermouth as a tried and true home remedy. To do this, pour ten liters of water over 300 grams of fresh wormwood leaves and let the mixture ferment in a plastic container for ten to 14 days. Only fermented vermouth manure is effective against codling moth, a simple infusion, however, is not strong enough. Against the strong smell, you can stir in a handful of rock flour (€ 14.95 on Amazon *). Spraying with wormwood must take place in spring between mid-May and mid-June and is best repeated several times.

Instead of fresh leaves, use dried herb that has been collected from the previous year for the vermouth. After all, you will hardly find suitable wormwood this early in the year.