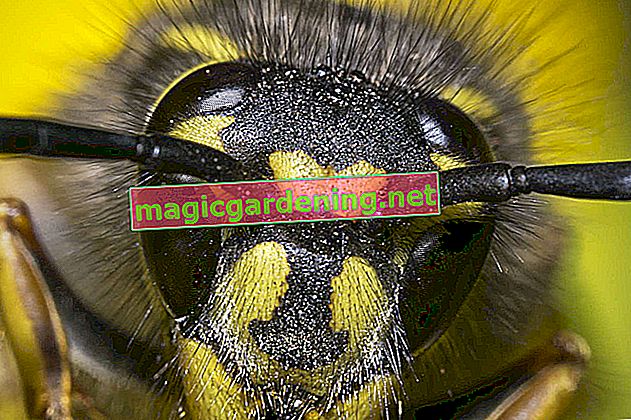 The common wasp (Vespula vulgaris) is one of the short-headed wasps and, along with the German wasp, is one of the wasp species that are very common in Central Europe. Vespula vulgaris can hardly be distinguished from its sister species at first glance. Both species have similar ways of life.

As a short-headed wasp, the common wasp is characterized by the small distance between the lower edge of the eye and the jaw claws. These so-called mandibles sit directly below the compound eyes, which is why the cheeks are almost completely missing. The abdomen of this species is drawn yellow-black like all real wasps, whereby the ringing can turn out differently between individual individuals.

Size of each individual:

In the spring the state is founded by a queen. She overwintered from last year and will produce numerous offspring in her last year of life. The chief can live around 14 months, while the workers die after six months. Males hatch in late summer and do not hibernate, so they live shorter than the workers.

Differences between common wasp, German wasp and others

The appearance of Vespula vulgaris resembles the appearance of other species native to Europe. However, not all wasps live near humans. Most species are peaceful and shy. They colonize species-rich landscapes with a rich supply of nectar. The abdomen drawing does not provide any information about the respective species, because it can be extremely variable. To separate the species, you should take a closer look at the head. The common wasp has a typical drawing on the face plate, which distinguishes it from the German Wepse. Characteristic is the broad black line that thickens downward in a club-like manner. The German Wasp usually has three points here, some of which can merge into one line.

Insects of all kinds are threatened with extinction. The common wasp is not (yet) an endangered species and it would be nice if it stayed that way. Therefore, you should definitely refrain from killing wasps. In most cases, control is also unnecessary. However, there is a need for action if a wasp's nest in the roller shutter box or a swarm of wasps attacks your afternoon table in the garden. Wasp nests in sensitive locations can be implemented by a professional. With wasps on the cake, there are several ways to drive away the voracious insects: Contrary to what many people suspect, the common wasp is comparatively peaceful. Workers defend themselves outside of their nest when they are disturbed or threatened. Their aggressive behavior increases the closer the distance to the nest is. Dark clothing reminds the animals of a potential predator against whom defensive measures are quickly taken. The conspecifics are informed of the threat by an alarm pheromone.

The wasp's venom is hardly more dangerous or painful than that of bees and bumblebees.

Adult wasps feed primarily on plant-based foods such as nectar and sugary juices. When the queens look for a suitable nesting site in April, they feed on nectar from early flowering plants such as willow. The scent of desserts is seductive. Once wasps have discovered sweet drinks and cakes as a source of food, they can hardly be driven away. Larvae are fed a pulp made from chewed insects, which is rich in animal protein.

Wasps have a sting that they use to overwhelm and paralyze their prey or repel enemies. However, only queens and workers are able to sting because the males do not have a sting.

Usually the stinger is at rest and hidden in a chamber. If there is an attack, the stinger is extended. The wasp holds on to its legs and pushes the stinger into the organism. It sets its piercing bristles in motion, which dig deeper and deeper into the skin and pull the entire sting with them.

Due to their special sting structure, wasps are able to sting several times. With them, the sting does not tear off, because it can be pulled out of the skin again due to the lack of barbs on the sting sheath. Even dead or broken animals can still sting, as the process is triggered by a reflex.

Structure of the sting: Various components were found in wasp venom, including histamine and serotonin, acetylcholine and free amino acids, as well as proteins and enzymes. Wasps inject between two and ten micrograms of poison into the organism per sting. The stings of wasps, hornets, bumblebees or bees are almost equally painful because they are composed of similar components.

In healthy people, the poison causes swelling and redness, which can be painful. However, the symptoms disappear after a short time. Various enzymes are responsible as the main allergens and cause dangerous body reactions in allergic people.

The common wasp is also known as the earth wasp because of its way of life. The wasp nest is preferably built underground, whereby the animals also settle in dark corners and protected niches in attics, roller shutter boxes or barns.

The queen starts building her nest from mid-April. She collects wood fibers from weathered wood and rotting tree trunks, which she chewed up into a sticky mass. This material gives the wasp's nest a light beige color. The nest is preferably built in a dark and protected place. Abandoned mouse and mole passages underground are popular. As the colony grows, more underground passages are dug and the nest expanded.

Establishment of the state

After the queen has completed the construction, she lays an egg in each brood cell. Shortly before the eggs are laid, fertilization takes place with the seeds that it has stored since mating last autumn. At this time the queen is still on her own and has to look after the brood and look for food. When the larvae hatch, she feeds them with an insect paste. The larvae release a drop of liquid that is rich in sugar and serves as food for the queen.

Shortly before the larvae pupate, they empty completely and for the first time by shedding feces. This prevents the nest from becoming dirty and the excrement from rotting. The queens exude pheromones, which influence the development of the larvae. From these, sterile workers emerge in early summer, who take over the tasks previously carried out by the queen. The queen is then responsible for reproduction.

Development of the state

During the summer months the nest grows continuously. Under optimal conditions, a state can accommodate between 3,000 and 4,000 individuals. The maximum size is reached when new sexually mature animals hatch in late summer. The queen reduces the pheromone release, so that new young queens emerge. The larvae develop in special brood cells that are slightly larger than conventional chambers. Males hatch from unfertilized eggs. During the rest of the year there are no new workers and the number of individuals is falling rapidly. Males leave the nest very quickly to search for females from other states to mate. They die shortly after mating. The old queen also dies in late autumn, which completely dissolves her state. The workers no longer have a job and become homeless. They die in the cold snap while the young queens retreat to protected winter quarters. Here they lapse into a frozen state until next spring.

Like all wild animals, the common wasp is subject to the Federal Nature Conservation Act. According to Section 39, Paragraph 1, it is forbidden to catch, injure or kill animals for no particular reason. The protection status also applies to the nesting sites. Although wasps are not subject to special protection like bumblebees, wild bees and hornets, they must not remove or destroy a nest for no reason. A professional can assess whether there are sufficient reasons for removal or relocation.

Better to hire an expert to remove a nest. Otherwise you risk a fine, which in most federal states is 5,000 euros.

Wasps in the garden

When wasps have chosen your garden, you can look forward to the useful helpers. Wasps are better than their reputation. Follow a few rules so that you do not endanger yourself unnecessarily and can live peacefully with the insects.

Wasps take on important functions in the ecosystem because they keep the populations of annoying mosquitoes, horseflies and plant pests such as aphids in check. The insects are considered to be insect killers because they have to prey on masses of proteins in order to raise their larvae. Wasps prey on around 500 to 2,000 grams of insects every day. Occasionally the wasps can also be observed on dead animals from which they collect the meat. In this way, wasps ensure faster carcass utilization.

Ecological benefits of the German wasp:

Give wasps an undisturbed space in the garden that is far enough away from your coffee table. Provide alternative roosts for wasps. The animals settle in gazebos and roller shutter boxes if they cannot find suitable nesting opportunities in nature. A simple wooden box, which was provided with entry holes, guarantees the wasps a safe shelter. Place this in a secluded corner of your garden.

Change clothes if you have been stung by a wasp. This could smell of the wasps' alarm pheromones and trigger another attack.

Wasps have a special sting structure that allows them to be stung several times. While bees have barbs on the sting sheath, the sheath surface of a wasp stinger is smooth. This allows it to pull the sting out of the skin again. This is also made easier by muscles that sit at the base of the spines and anchor them firmly in the body. The sting reflex is still present even in animals that have just died or split up, so that they can still sting.

What to do with a wasp's nest

When there is no imminent danger, you can leave nature to its own devices. The wasp state dies out in autumn and the overwintering young queens do not use the old nest again. You can remove this in winter when there is no wasp left in it. If there is an immediate danger from the wasp's nest, you can contact a specialist. NABU and LBV are the first points of contact where you can get help. There are also special wasp advisors.

How can I keep wasps away?

Make sure that no windfalls are left in the garden. Wasps are magically attracted to this. Harvest the fruit early. You should also avoid dark clothing, as these act like a potential predator for wasps and tempt to attack.

Species-rich flower meadows also attract wasps. Instead of mowing the entire meadow, you should make your garden more structured. Leave a strip of wild plants and mow only part of the lawn. The flower border should be in an area away from the terrace, balcony or other seating area.

How dangerous is a wasp sting?

Even if many are afraid of a wasp sting, it is no more dangerous than a sting from bees or bumblebees. The components are very similar. Wasps inject between two and ten micrograms of venom per sting. In the majority of people, the reddened sting point swells, which can cause pain and itching. After a few hours the symptoms will subside automatically. When people are allergic, life-threatening symptoms can occur. These reactions are caused by various enzymes in the wasp venom.

What helps against a wasp sting?

Cool the sting with ice or a cooling pad to relieve the pain and soothe the itching. Onions are a well-tried remedy for wasp stings. The juice cools and has an anti-inflammatory effect at the same time. You can also neutralize the poison by pressing an envelope with cold vinegar over the stab site.