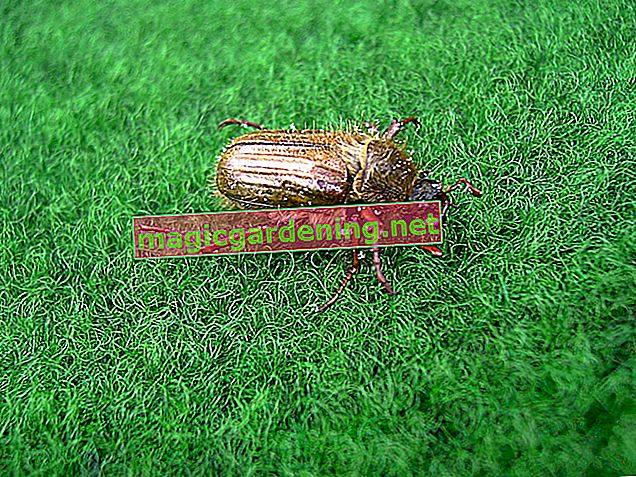 Regardless of the common family name scarab beetle, there are clear differences between cockchafer and junior beetle. These deviations are discussed in more detail below: The cockchafer is characterized by the different coloration of the individual body parts. The wing covers are red-brown to dark brown. The head, pronotum and the underside of the trunk, however, are black. A striking drawing on the flanks of the abdomen in the form of white, triangular spots reminiscent of a zigzag pattern is striking. Light hair in places is barely visible on the cockchafer or can be felt with the finger.

The June beetle comes with a uniform, light brown body color. He also dispenses with the concise decoration with lateral zigzag lines. However, a June beetle cannot completely resist some decorative ornaments. Three raised ribs on each wing are its trademark, to which the ribbed curlew beetle owes its name. Another outstanding difference to the cockchafer is the pronounced hairiness that covers the entire beetle.

Are there any doubts about the comparison of cockchafer vs junior beetle? Then take a look at the feelers. The cockchafer proudly carries its awe-inspiring antennae with fan-shaped clubs that boast six to seven lamellas. The number of lamellas reveals the beetle sex. Six lamellas on the fan probe identify a female. If you count seven lamellas on the antennae, it is a male. In contrast, the three-part, small antennae of the ribbed curlew beetle appear very modest. June bugs take it slower than cockchafers. When adult ribbed curl beetles soar through the air on their wedding flight in June and July, cockchafer have long since ended their family planning. For field cockchafer and forest cockchafer, the main flight time extends from the end of April to the end of May. Every now and then in June there are still some stragglers among the cockchafer, which are mistakenly called June beetles.

Furthermore, June beetles like to oversleep and fritter away the day and only fly off at dusk. In contrast, cockchafers are enthusiastic early risers and do most of their beetle duties in daylight.

Larvae in a uniform look

With regard to the cycle and appearance of their larvae, there is no noticeable difference between cockchafer and junior beetle. Fertilized females lay their eggs in the ground, in close proximity to all kinds of plants. Immediately after hatching, the caterpillars begin to eat by eating the roots. The appearance is characterized by the typical grub shape, which gives no indication of the later species of beetle. Each grub completes a cycle of 3 to 5 years, has a cylindrical body with a brown head and takes a crooked posture. Only when the finished beetles emerge from the ground after two or three hibernations and pupation does it become clear whether they are cockchafer or June beetle. Do not confuse cockchafer (Melolontha) with ladybird (Coccinellidae). The commonality of both beetles is limited to the similar naming in everyday language use. It would go beyond the scope of this guide to list all the differences between cockchafer and ladybug. In fact, ladybirds are a separate family of insects with 6,000 species worldwide. Popular in Europe as a beneficial insect and revered as a symbol of luck is the colorful seven-point ladybird with bright red wings. Hobby gardeners close to nature warmly welcome ladybugs because their larvae eat huge amounts of aphids. An informative article on Wikipedia gives a detailed insight into the wonderful world of ladybugs.

Cockchafer and rose beetle are distantly related as family members of the scarab beetle. In a direct comparison of adult beetles, the first glance gives certainty about their identity. With a dazzling gorgeous dress, rose beetles are a feast for the eyes. European species listen to picturesque names, such as shiny gold rose beetle (Cetonia aurata) or bronze green rose beetle (Protaetia lugubris). Have a look at Wikipedia in the diverse, informative articles with many pictures of breathtakingly beautiful rose beetles.

In contrast to the glamorous rose beetle, the brown cockchafer is not just a cinderella. Rose beetles feed primarily on nectar, pollen and tree sap. Every now and then the noble beetle beauties nibble on the blossoms of roses, which does not cause any significant damage. Occasionally, minimal traces of tiny beetle teeth can be found on the blossoms of cherry, plum, elderberry and hawthorn. Cockchafer, on the other hand, target the foliage of trees and bushes, which can lead to devastation if there are local masses.

Rose beetles are under protection As already explained in the comparison of cockchafer and June beetle, larvae cannot be distinguished from scarab beetles. This fact has tragic effects on the harmless rose chafer. Although his grubs feed exclusively on sludge and decomposing organic substances, they are often mistaken for cockchafer larvae and destroyed. In the course of this, some of the most beautiful rose beetle species have come under pressure. For this reason, the Federal Nature Conservation Act lists the shiny gold rose beetle as a protected species so that it does not end up on the red list of seriously endangered species.

Cockchafer plagues with widespread destruction of forests and crops are a thing of the past. In the worst case, there is a high incidence of cockchafer locally when the larvae nest under the lawn or in the vegetable patch. Nematodes of the genus Heterorhabditis have proven effective as effective control without the use of poison. The roundworms parasitize and destroy every voracious grub within 2 to 3 days.

What is the difference between cockchafer and ladybug?

Both beetles are not closely related. Rather, they are two completely different families of insects. The two beetles can be clearly distinguished visually. Cockchafer have inconspicuous brown wings. Ladybugs prefer a colorful appearance with red, yellow, brown or shiny black wings, which are often decorated with black, yellow or red dots. In addition, a cockchafer with a length of 25 to 30 mm is a giant compared to the ladybug. The popular seven-point ladybird, for example, has a body length of 5 to 8 mm.

Do cockchafer only fly in May?

No. Cockchafer are popularly called this because their main flight time is May. After a mild winter, the beetles often leave their winter quarters as early as April and go in search of food and a suitable partner. Until June, flying cockchafer can be observed, which like to attack the leaves of trees. These late bloomers are sometimes referred to as June beetles, although the ribbed curl beetle actually bears this name.

Are cockchafer and junior beetle related?

Yes, because both beetles belonged to the scarabaeidae insect family. This fact is reflected in a similar appearance, which at first glance could be confused. Of course, there are marked differences between the cockchafer and the juniper beetle, which led scientists to divide the two beetles into two different genera. The June beetle is the so-called ribbed curl beetle (Amphimallon solstitiale), which occurs between June and July. In contrast to the cockchafer (Melolontha), a June beetle is smaller, has three-part antennae and thick hair.

Are rose beetles harmful to roses?

With their dazzling appearance and a stately size of 1.5 to 3 centimeters, rose beetles cannot be overlooked. If the magnificent beetles frolic on your roses, there is no need to worry. The lovable Brummers are primarily after sweet nectar and nutritious pollen. Every now and then a rose petal gets between the teeth, which does not have any serious consequences for the plant.

The compost heap becomes a treasure trove when you discover a fat grub in it. Mostly it is a larva of the rose beetle. With a little luck, you will be holding the grub of a rhinoceros beetle, another priceless, rare jewel of nature. Please put the larvae back in the compost so that they can end their cycle and delight us as dazzling beetle beauties or imposing beetle giants.