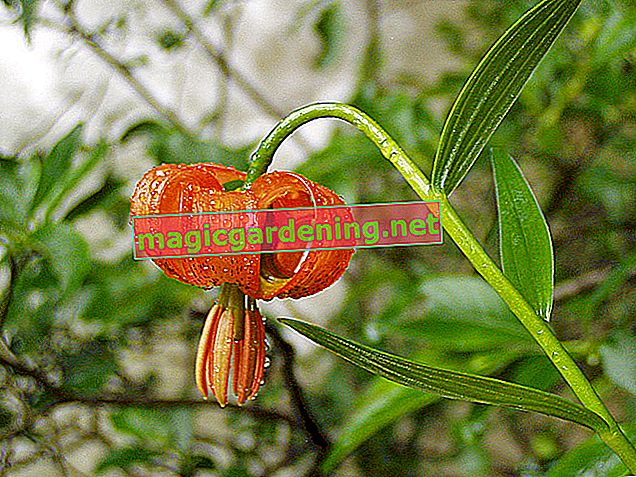 Most lilies are hardy

Most of the commercially available types of lily are hardy. They neither need protection in winter nor do they have to be forcibly brought into the house. But there are a few species of lily that are considered sensitive and should be overwintered as a precaution and especially in cooler locations. These include, for example, the Inca lily and the Madonna lily.

Hardy lilies in this country

But which lilies in this country are equipped for winter and don't necessarily need protection? The most important lily species that can be classified as hardy are listed here:

While most lilies do not shy away from frost, moisture brings difficulties. Winter wetness in particular damages these plants enormously. Therefore, lilies are best planted in soil with good drainage. In winter, they are covered with brushwood to protect them from moisture in the root area.

Precautions don't hurt: this is how lilies are overwintered

It is advisable to protect your lilies, especially if you are standing in a rough position. Lilies outdoors, such as in the garden bed, are overwintered as follows:

Dig up the lily bulbs and put them into the quarters

It is even safer to dig up the lily bulbs and hibernate them at home, in the basement, in the garage, in the attic or in the garden shed. To do this, the first step is to cut down the inflorescences and wait for the leaves to turn yellow.

Next, the onions are dug up and the remaining earth is removed. After the onions have been air-dried for 2 days, put them in a wooden box or pot with earth, sand or sawdust.

Hibernate lilies from the balcony

Lilies that are in the pot should be cut down in autumn and put indoors. This is important so that the soil in the pot does not freeze through. This would destroy the onions. Alternatively, the pot can be left outside, against a protective wall, placed on a block of wood and wrapped in foil.

So that the lilies survive the winter well, they should not be fertilized heavily after July. At most, a small amount of fertilizer can be added in August to provide the onions with nutrients for the coming year.