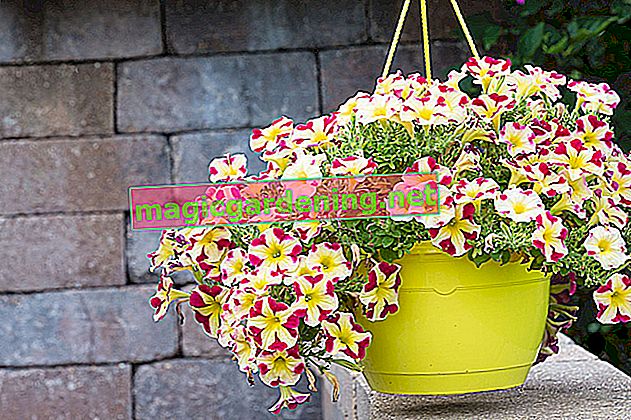 Hibernate Calla as a flower bulb

You can get the bulbs of the garden calla out of the ground at the beginning of October at the latest. Rub the soil and cut off the yellow foliage.

Let the onions dry well and then place them in a cool place about ten degrees. The basement is well suited.

The bulbs are put back in the garden in spring. For this, the earth must be at least ten degrees warm. Frosts must no longer occur.

The instructions for planting new tubers often state that you can plant them in autumn. You shouldn't rely on that. Even tubers designated as hardy are almost never winter-proof. They survive only very mild winters in the cold earth in the flowerbed.

Bring calla in a pot over the winter

There are different types of room calla. Some of these are evergreen, while others pull in the foliage entirely during rest.

Evergreen Calla overwinter in a pot. Place it in a bright and cool place at around ten degrees. Make sure that the plant is not in the train.

During the winter, the plant is not watered and fertilized. The earth has to dry out completely.

Get used to Calla slowly to warmer temperatures

Depending on the variety, the Calla will be used to the warm flower window again from January. Before doing this, repot the plant in new soil.

Start watering slowly and give the calla some flower fertilizer every two weeks. (€ 13.27 at Amazon *)

As soon as the first new shoots appear, keep the soil well moist at all times.

The “Crowsborough” is a white calla variety that is relatively robust. According to the breeder, it can withstand temperatures down to minus 20 degrees. You can leave the tubers in the ground over winter.

However, you should still ensure winter protection by only planting the tubers in somewhat protected locations.

In autumn cut off the above-ground parts. Cover the planting site with a blanket of dry leaves. As soon as the temperatures outside rise to over ten degrees and no more night frosts are to be expected, remove the winter blanket. The floor can then heat up more quickly.

Do not confuse indoor calla with the marsh calla (Calla palustris), which is often grown in ponds. In contrast to houseplant, marsh calla is hardy and does not have to be overwintered in the house.