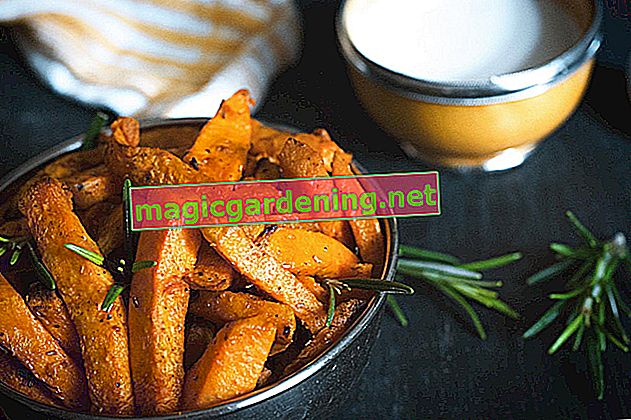 Crop pruning is not enough

Rosemary is assigned to the subshrubs. The popular culinary herb thus plays in a league with lavender, thyme or beard flowers. Plants in this category thrive for several years, where they gradually lignify from the base. It is the herbaceous areas that are renewed every year and on which the spicy leaves sprout. Without a cut, the lignification will prevail, so that a rosemary bush will noticeably bald.

Even though you cut your rosemary continuously as you harvest it, the herb needs extensive maintenance pruning so that lignification does not gain the upper hand.

Do not cut rosemary into the wood. As profusely as the Mediterranean herbal plant gives us abundant flowers and aromas, it is just as stingy when it comes to creating sleeping eyes. Botanists refer to dormant buds as the sleeping eye. Only when active parts of the plant fail due to a cut, storm or frost damage, dormant buds wake up and replace lost shoots. In contrast to many native trees, rosemary does without the iron reserve. As a result, if the plant has been cut too deeply into woody areas, it will not sprout or sprout very slowly.

A magnificent rosemary bush is the result of harvest and maintenance pruning. In an old, neglected plant, lignification is on the rise. Under certain conditions, you can revitalize aged rosemary with a targeted incision. The following overview summarizes recommended cutting types with suitable dates:

The flavoring power of your rosemary is at its best when the flowering season begins soon. Classic varieties such as 'Veitshöchheim' or 'Arp' develop their buds between April / May and June / July, depending on the weather and site conditions. Cold-sensitive hanging rosemary can be left until June before it heralds its flowering period. Already at harvest you should keep an eye on the shape and vitality. How to harvest rosemary correctly:

With the small pot rosemary you complete the maintenance pruning at the same time. To do this, thin out damaged or dried up branches. Give the plant a hemispherical shape so that the sunlight can penetrate inside for a densely leafed growth.

Shortly before the start of flowering, the aroma level is at its zenith. Now you should harvest and preserve the annual need for rosemary. In contrast to many other herbal plants, rosemary hardly loses its flavor when the branches are air-dried. Tie the shoots together with bast ribbon to form a small bouquet. Hang this upside down in a dark, airy place. In the course of the following 2 to 3 weeks, check the binding material from time to time so that it does not loosen. Finally, strip off the spicy needles and store the harvest in the dark jar.

If your rosemary has spent the cold season in frost-free winter quarters, the time window for maintenance pruning opens in early spring. Keep the herb plant outdoors, please wait until after the ice saints before cutting. If late frosts hit freshly cut shoots, the plant will not survive the dilemma unscathed. Better to play it safe, write down the date in the care plan only after the flowering period. How to cut rosemary in an exemplary manner:

Strangely enough, dried up rosemary sprigs are often the result of excessive watering and waterlogging. In this case, you should repot the affected plant in fresh substrate after cutting. Put some pottery shards on the bottom of the pot to prevent future waterlogging. From now on you should only water your rosemary when the soil has noticeably dried out.

You should postpone the time of cutting if the sky has opened its locks beforehand. Moisture not only affects the aromatic content of fresh rosemary branches. Soaked shoots are not suitable for drying because mold can quickly form on damp plant tissue.

Without regular cutting, rosemary will age within a few years. Garden plants that have been forgotten in a sunny niche are often affected. A sparse cover of leaves only promises a low harvest yield. However, the neglected herb plant has proven to be robust and hardy. Reason enough to prescribe a rejuvenation cut instead of clearing the Mediterranean survivor straight away. How to proceed professionally:

A cut into the old wood is taboo on all semi-shrubs. At the same time, a woody shoot signals courage to live by letting a lateral, young, herbaceous shoot sprout. This is the perfect prerequisite for a derivation cut with a tapering effect. Where old and fresh wood branch out, they cut. The figure below illustrates the skilful cut. Then apply a generous portion of compost or a complete organic fertilizer and pour over. Which scissors are suitable?

Trendy herb scissors with 5 to 7 cutting edges are not recommended for cutting rosemary. Such constructions are primarily suitable for parsley, chives or lettuce.

Meticulous cleanliness and sharp edges ultimately qualify the tool for cutting rosemary. Germs and pathogens lurk to get into the pathways of plants through contaminated scissors and knives. Blunt blades leave frayed, bruised interfaces that fungal spores and pests serve as welcome targets. Regularly sharpen the cutting edges manually or by machine. Before each use, clean the cutting tool with hot water and disinfect it down to the last niche with Sagrotan or alcohol.

Be aware of the risk of confusion with rosemary heather

Rosemary heather (Andromeda polifolia) leads us astray with its slender, lanceolate leaves. In fact, it is an evergreen heather plant with highly toxic ingredients. The nasty small shrub is found in Germany primarily in the low mountain range, the Bavarian Alps and in heather and raised bog areas. The risk of confusion with real rosemary is only averted in autumn, because the leaves turn bright red or intense yellow.

A fully grown rosemary grows in our garden and we would like to transplant it. What should be considered when changing location?

The best time to transplant a rosemary is in spring. Cut back all the shoots in half. Avoid cutting into old wood. Inevitably, a lot of root mass is lost, which is compensated for by pruning. Please ensure that there is a continuous and abundant water supply. Drought stress is the number one cause when rosemary transplanting fails. We also recommend a balanced supply of nutrients from April to the end of July with compost or a complete organic fertilizer.

When and how do I harvest rosemary correctly?

Basically, rosemary can be harvested all year round, provided the plant is large enough and spends the winter behind glass. Fresh shoots are particularly aromatic. Shortly before the start of flowering, the Mediterranean herb plant will give you the tastiest harvest. Rosemary lovers harvest the annual requirement in spring (April / May) in one go and hang the branches upside down to dry. The pretty and tasty flowers are only suitable for fresh consumption.

As a Mediterranean herb plant, rosemary is only partially hardy. Ideally, the aromatic subshrub is cultivated in a pot and wintered frost-free behind glass. In regions with mild winter there is the option of growing rosemary in the garden. The plant survives the cold season with extensive winter protection. Put a hood made of jute or garden fleece over the branches. Please cover the root disc with a thick layer of leaves and needles. In early spring, cut back all the shoots by half.

In winter I have my large rosemary pot inside in front of the kitchen window. Whole branches dry up again and again and turn brown. Should I cut back the plant?

In winter, the kitchen window is far too warm for your rosemary. Brown, dried up twigs indicate that fungi are spreading on the weakened herb plant. A change of location can fix the problem. Rosemary should overwinter frost-free but cool at temperatures between 5 and 10 degrees Celsius. Water sparingly and do not apply fertilizer until the end of March. After the ice saints, clear the plant out. Thin out dead shoots and cut back the remaining twigs in the herbaceous area by half.

Our rosemary bush is 1.50 meters tall, expansive and woody at the bottom. Now in May the flowering period is coming to an end. Can I cut back the plant now?

The best time to cut is in spring after the main frost period. After the flowering period, pruning is possible, provided that you do not go to work in high summer heat or massive drought. First clear out all the dead wood. You can cut back all other shoots until just above the woody area. Ideally, give the bush a hemispherical shape for light-flooded growth.

The good-natured cut tolerance of rosemary suggests that the Mediterranean herb plant forgives every mistake. Unfortunately, this is not the case, as the following table shows. A wrong time or a cut too deep in the wood will bring the opulent aromatic plant to its floral limits. Familiarize yourself with the 3 most common cutting errors and benefit from tried and tested tips for prevention.

Semi-lignified clippings are ideal for growing rosemary. Select 10 cm long cuttings that you defoliate in the lower half. In a pot with potting soil, the offshoots find time and leisure to take root. A transparent hood made of foil or glass, which you ventilate for a few minutes every day, is beneficial for the process. Keep the substrate constantly slightly moist and do not apply any fertilizer.