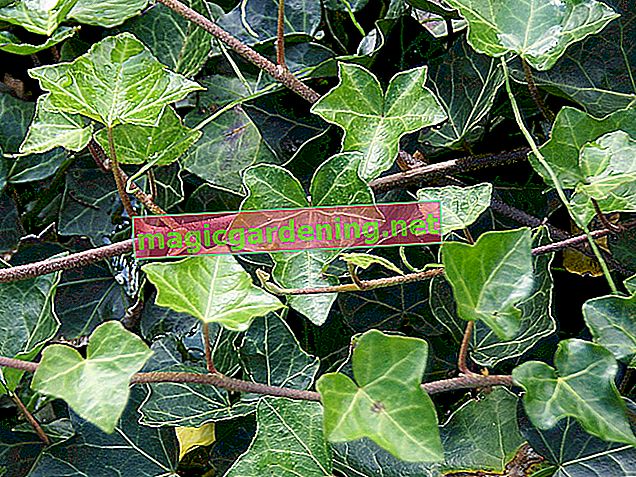 Ivy is one of the poisonous plants in the garden

Ivy contains the poisonous substances hederin and saponins in all parts of the plant, but especially in the berries. There is a real risk of poisoning, especially for children and animals, when consumed or in contact.

If you have children or pets, it is better not to plant ivy in the garden. It is also better not to look after the climbing plant indoors.

Symptoms of poisoning when consuming the berries

For adults, the berries of ivy do not pose such a great threat because the fruits taste very unpleasant. Of course, adults shouldn't eat ivy in any form either. Just two or three berries can cause serious poisoning.

Symptoms vary when the fruits of ivy are poisoned. Above all, stomach and intestinal problems, burning in the throat, states of excitement and a fast pulse are noticeable. Severe poisoning can lead to shock and respiratory failure. In the worst case, eating ivy berries leads to death.

The leaves of the ivy are not quite as poisonous as the berries. However, they also contain toxins that can cause inflammation and pustules on the skin in sensitive people. Therefore, when you plant or cut ivy, you should always wear gloves.

When cutting the ivy tendrils, tiny particles are created that it is better not to inhale. Allergy sufferers are particularly at risk here, but healthy people should not ingest too many of these substances through breathing. If you need to cut large amounts of ivy or remove it from the garden, wear a breathing mask to be on the safe side.

Clear away all cuttings immediately and don't let them lie. Then animals in the garden cannot poison themselves.

Ivy is a particular hazard for children. If children eat a few leaves, it will not be life-threatening, but afterwards they can become very unwell.

However, the berries are so toxic that children can seriously poison themselves from them. Even eating two or three berries can lead to shock with an uncertain outcome.

If you suspect that your child has eaten ivy leaves or ivy fruits, you should seek medical advice immediately. Symptoms of ivy poisoning include:

What to do about ivy poisoning

If there is any suspicion or certain poisoning by ivy, do not hesitate long. See a doctor or hospital who can detoxify you immediately. The poison control centers, whose telephone numbers can be found on the Internet, also offer first aid.

Pets are also at risk

Pets can also poison themselves with ivy. Dogs, cats, guinea pigs, hamsters or birds, even horses can die of ivy poisoning. Interestingly, donkeys don't seem to have any issues with the ingredients in ivy.

The symptoms are similar to those in humans. The animals suffer from excitement, cramps, stomach and intestinal complaints and even shock.

In the event of poisoning, immediately contact a veterinarian who will treat your dog, cat or rodent.

Whether you grow ivy in the garden or as a houseplant doesn't matter much in terms of toxicity. The plants kept in the room do not develop berries, but the leaves and shoots also contain toxins.

If you want to keep ivy in the house or on the balcony or terrace, make sure that neither children nor animals can get near it. Collect fallen leaves immediately to prevent the risk of poisoning.

Even if the native ivy species are already very poisonous - the varieties represented in this country cannot compete with the American ivy, also known as poison sumac. Poison sumac has much higher concentrations of toxins, so consuming it is often fatal. On contact with the skin, severe inflammation occurs, reminiscent of the burns.

Ivy has played a role in homeopathy and natural medicine since ancient times. Tea made from the leaves is used for diseases such as bronchitis. Ivy is also used in the manufacture of shampoo and other personal care products.