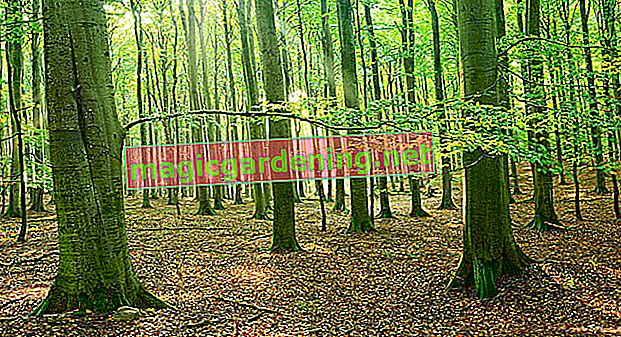 The fruit of the beechnut is a nut called beechnut. They consist of a rough capsule made of four lobes, in which usually two, sometimes more, seeds grow. The seeds are triangular and have a brown shell.

The capsule is initially open, but closes and hardens after fertilization. To harvest beechnuts, the capsule must be opened. When they fall down, the fruit cups spring open by themselves and release the seeds.

In the forest, the reproduction takes place via squirrels and birds, which transport the seeds to more distant places.

At what age do beeches mature?

Young beech trees do not yet bear fruit. A beech tree does not bloom until it is around 20 years old. It only develops fruits in which seeds ripen at the age of 40 to 80 years.

A beech tree does not bear beechnuts every year

A special feature of the beech is the fact that it does not produce a rich harvest every year. Usually every five to eight years, so many beechnuts grow on the tree that the ground is completely covered later. These years are called fattening years because in the past the pigs could be fattened with the beechnuts.

In the following years the harvest is much smaller. Sometimes no fruit grows on the tree at all.

The fruits of the beech are slightly poisonous

Beech nuts contain the active ingredient fagin, which causes nausea when consumed. Horses, dogs and cats are also not allowed to eat large amounts of beechnuts. Birds, forest animals and pigs, on the other hand, can tolerate the fruit.

The toxin is neutralized by heating, primarily by roasting. The beechnuts can then be safely consumed.

Using beechnuts in the kitchen

Beech nuts have always enriched people's menus in times of need. The roasted seeds were ground into flour or used as a coffee substitute.

Roasted beechnuts go well with autumn salads or as a substitute for other nuts.

Beeches can be propagated quite easily with seeds. When you've gathered beechnuts, put them in a water bath and discard any fruit that floats. The other fruits are capable of germination.

Beechnuts need to be stratified. This means that the germ inhibition by cold has to be overcome. This happens either directly in the ground during winter or by storing the fruit in the refrigerator for several weeks.

Beech nuts contain a lot of oil. They used to be squeezed out and the liquid obtained was used as lamp oil. In times of need, beech oil was also used for cooking.