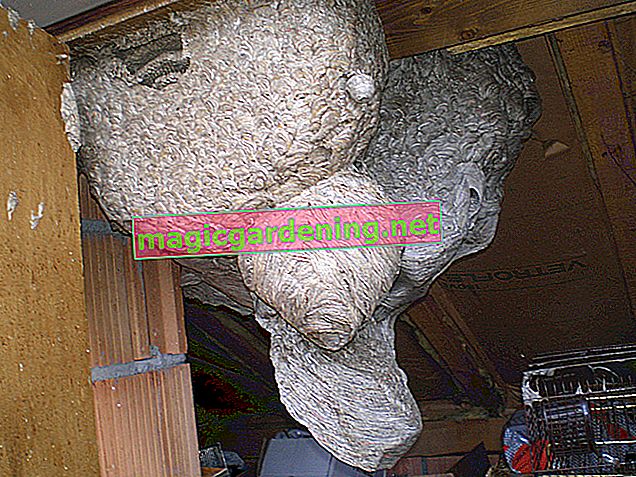 Only certain wasp species are relevant for the roof area

Wasps that build their nests near humans and preferably in dark, protected cavities are usually only German and common wasps and hornets. All three species belong to the real wasp subfamily. Above all, the Germans and the common wasps are also the ones who are not shy about helping themselves at our outdoor dining tables and can be quite annoying.

If one of these species has discovered a niche in the roof truss for building a nest, this is doubly problematic. A country can grow to up to 7000 animals - and especially in a mass network, the stinging insects can be quite uncomfortable, and possibly even fatal for those allergic to insecticides and children. For this reason alone, a specialist should consider removing the nest.

Possible damage to the building fabric

In addition, the wasps do damage to the fabric of the building when they build their nests. The following materials in particular are at risk:

Wasps are busy builders and have very powerful biting tools. With these, they gnaw away building material for their honeycomb structures on the one hand and gain access to cavities that are initially blocked. They can easily work their way through wood and insulation material. But plaster, concrete and stone are too hard for them.

The damage is mainly caused by the removal of the wooden beams and insulation under the roof. However, there is no reason to fear that a roof structure will be seriously unstable and its load-bearing function impaired. The amount of material removed is far too small for that. It can be problematic if the insulation is bitten through and the resulting cold bridges.

Old houses are particularly susceptible to wasp colonization under the roof. On the one hand, there is a lot of wood here, which tends to be rotten, i.e. easier to remove for the wasps. On the other hand, cracks in the plaster and hand-made, incompletely staggered roof tiles offer them easy access to attics.

In the case of old houses in particular, it is therefore advisable to regularly maintain the walls and roof as a preventive measure and to close any weak spots in good time before spring.

If possible, an existing wasp nest should be relocated by a specialist. The closing of entrances is not only punishable because of the species protection of the wasps, but also increases the damage, because the animals then free themselves other paths.

In autumn, when the nest is orphaned, you should clean the area thoroughly with vinegar and water and repair damaged areas. This will also prevent a queen from founding her state here the following year.