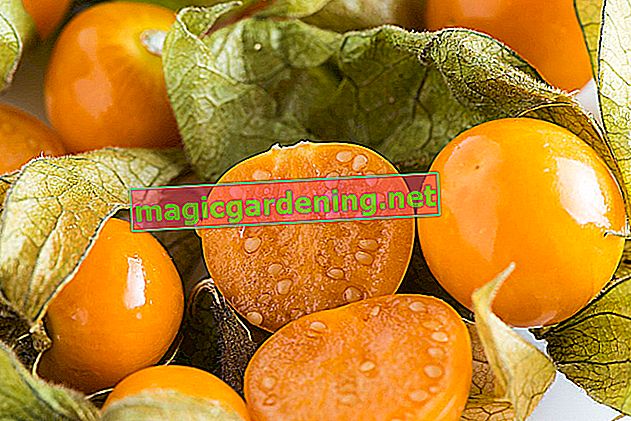 The warmth-loving physalis takes a long time to grow, bloom and set small, cherry-like fruits. In addition, due to the risk of frost, the seeds should not be released outdoors before mid to late May. Both reasons mean that the German summer is too short to harvest ripe physalis in time for the end of the growing season. For this reason, it is advisable to move the plants on the windowsill as early as February if possible and to put the young plants in the open air bed from May. Alternatively, it can also be kept in a bucket on the balcony or terrace.

Proceed as follows when pulling out the plants:

Sow physalis directly into the field

Of course, direct sowing outdoors is also possible, but at least not before the end of May for the Andean berries (as well as for other non-frost-hardy Physalis species such as the pineapple cherry). But then it will probably be too late for a harvest in the same year, as the fruits that ripen in August / September with sufficient sun and warmth can no longer reach maturity due to the autumn coolness. Contrary to many information on the net, at least the Andean berry is a perennial plant, which means you can safely overwinter it and it will bear fruit in the next year. For this, however, you should best cultivate the physalis in a pot, because it is not winter hardy. On the other hand, physalis planted outdoors are in fact only annual because they do not survive the German winter.The lantern flower is an exception.

If you already have a physalis in your garden, you no longer need to buy seeds. You can dry the seeds and harvest them for sowing the following spring, or you can lightly crush some fruits and bury them under a thin layer of soil in the garden. The compost is also very suitable for sowing.