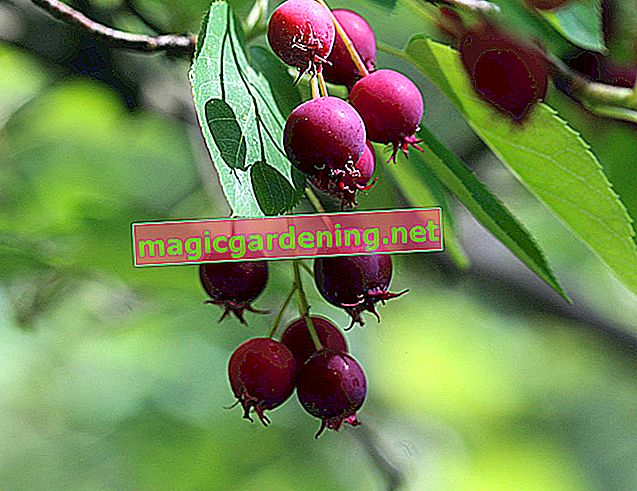 The comeback of a versatile wild fruit

The rock pear is planted by many hobby gardeners nowadays because of its relatively undemanding care and the versatile possibilities of cultivation in the bucket or the opening of larger specimens. Earlier generations appreciated the rock pear, which also thrives on poor soils, primarily because of the numerous fruits. In some areas, the name Korinthenbaum has been handed down for the rock pear, as the fruits were used as a substitute for currants. The fruits, which are visually reminiscent of blueberries, are experiencing a certain renaissance today, as their ingredients are said to have positive effects on human health.

The time of harvest and the type of consumption are decisive

Even if it might be difficult sometimes in the race with the birds in the garden: The fruits of the rock pear should only be harvested in June or July when their full maturity is indicated by the color change from red to a dark purple or blue-black. There are very good reasons for this, because unripe fruits contain a higher content of the so-called cyanogenic glycosides. Even after consuming large amounts of chewed seeds, certain gastrointestinal complaints can occur due to the prussic acid that is split off. However, since most of the unchewed seeds are excreted undigested when raw fruits are consumed, there is no risk of drastic poisoning potential even with more frequent consumption. If you want to be on the safe side,you can also simply enjoy the fruit in processed form: The ingredients responsible for the formation of hydrogen cyanide (which, by the way, are also found in apple seeds) are effectively broken down when the fruit is cooked.

Refine the fruits freshly after the harvest into numerous delicacies

A whole range of tasty delicacies can be made from the fruits of the rock pear, which have a slight taste of marzipan:

Removing the fruit stalks is a bit of a hassle, as it is sometimes difficult to remove them from the fruit. However, these should definitely be removed before further processing.

In Canada, the use of the fruit of the rock pear is very important, not least because of the traditions of the indigenous people. The so-called Saskatoon berries are not only valued there as dried fruit, but also processed into pemmican along with fat and dried meat. Hikers and athletes appreciate pemmican on longer excursions in nature as a source of energy for emergencies.