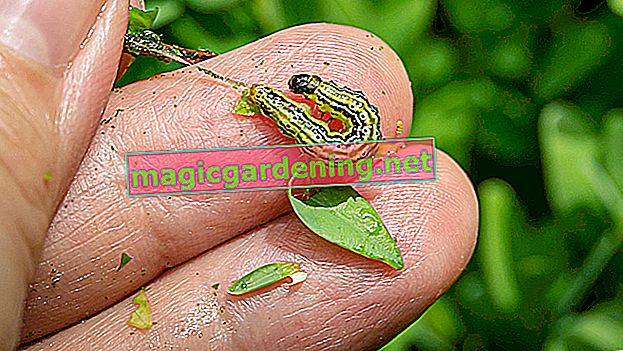 Many possible causes of dry and brown leaves

When people think of brown leaves on their boxwood, they immediately think of fungi that are difficult to control or stubborn pests. Fortunately, it is not always so dramatic, because there are often simple care mistakes behind the dried up shoots. Once this cause has been identified, it can be quickly remedied and the beech tree can, of course, after vigorously pruning the dry parts of the plant, grow fresh and green again. Cylindrocladium buxicola or even the notorious box tree moth, on the other hand, are not so easy to drive away.

The boxwood often looks like it has dried out after a frosty winter. The reason for this is a lack of water, because the plant could not absorb enough water through the roots in the frozen ground. Frost and a very sunny location are also a bad combination: The sun increases the shrub's need for water, which, however, cannot cover it due to the frost. Incidentally, the frost and drought damage does not show up immediately, but usually only during the budding in spring. Furthermore, a lack of water can also occur during dry phases in spring or summer if there is not enough water.

The tubular fungus Cylindrocladium buxicola causes the so-called boxwood shoot death, in which the affected bushes look brown and dry. But other fungi also cause the shoots to die:

In all cases, only an immediate, strong cut back into the healthy wood and the removal of the top soil layer will help. The harmful fungi can survive here for years.

In addition to the notorious box tree moth, other pests also prefer to cavort on box trees. Their damage patterns often make infected plants look like they have dried out:

When it comes to pests, it is better to be safe than sorry. Reduce the likelihood of infestation through optimal care and an airy, not too warm location.

In addition to an insufficient supply of nutrients, over-fertilization can also have serious consequences that weaken the plant. As a result, this is more susceptible to disease and pest infestation.