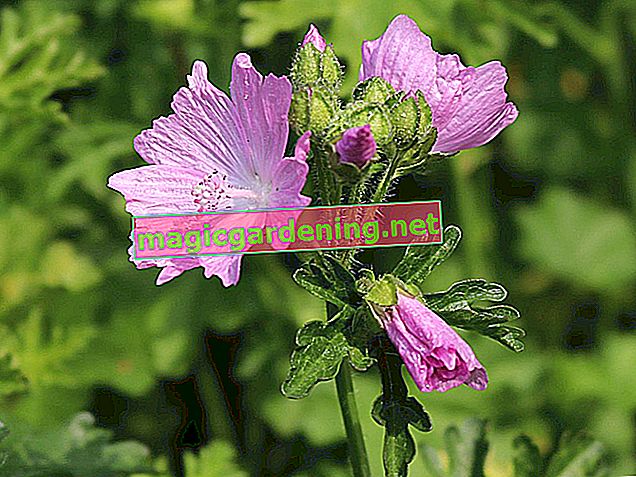 Which location does the musk mallow prefer?

Do you have to water the musk mallow regularly?

If possible, the plant should not dry out and should therefore be watered regularly, especially during longer dry periods in summer. However, it is essential to avoid excessive moisture and waterlogging.

How and with what should you fertilize the musk mallow?

Regular fertilization is not necessary, instead you can provide the summer flower with compost or a liquid complete fertilizer at the beginning of the growing season.

Can you also cultivate the musk mallow in a pot?

A pot culture succeeds without any problems, provided the location is right and the plant is neither too much nor too little watered. In addition, specimens kept in planters must be regularly supplied with a suitable fertilizer (e.g. a liquid fertilizer for flowering plants).

What is the best way to propagate the musk mallow?

Musk mallows themselves reproduce very reliably via seeds, but can also be multiplied by cuttings in summer. It is best to sow in the spring under glass. Direct sowing can be carried out from April.

What diseases and pests should one look out for in the musk mallow?

Like all mallow, the musk mallow is also quite susceptible to the mallow rust, which is noticeable by brown spots on the leaves and is highly contagious. Affected plant parts or plants must be removed immediately so as not to endanger the entire population. A homemade broth made from field horsetail often helps.

How should you cut the musk mallow?

A pruning is not necessary, but dead shoots should be removed immediately. This measure stimulates the plant to develop new flowers and thus extends the flowering time. However, you should leave some shoots for self-sowing.

Is the musk mallow hardy?

The musk mallow is considered to be very hardy.

Malva moschata is an ancient medicinal plant that used to be used primarily for coughs and sore throats, but also for throat and mouth infections. For this purpose, the blooming herb that has been collected in summer is poured over boiling water and left to infuse overnight. The brew is then poured off and used for gargling.