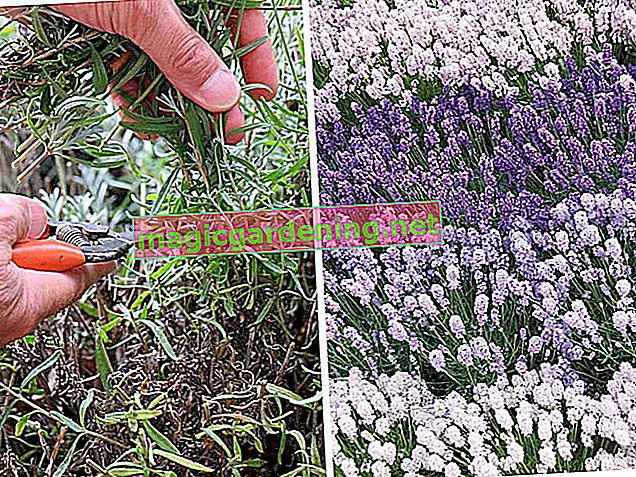 Propagation via seeds is not very easy with lavender. This is due on the one hand to the fact that the commercially available lavender seeds are usually not single-variety, but on the other hand it is also due to the fact that the seeds require certain conditions to germinate and grow. Lavender is a light germinator, ie it must not be covered with soil when sowing, but needs a place that is as bright as possible. You should also move the seeds on the windowsill in February / March so that the plants bloom in the same year. Otherwise, you can only apply the lavender directly into the bed after the ice saints, when night frosts are guaranteed to be no more. For cultivation, you can use a special cultivation substrate (€ 9.05 on Amazon *) or nutrient-poor herbal soil.

The real lavender in particular forms a large number of seeds, which - provided they are comfortable in their location - often emerge in large numbers. You can either pluck these young plants out, let them grow or transplant them to another place. To do this, you have to dig them out as early as possible, preferably when there are only a few tender leaves next to the two cotyledons. The younger a lavender, the easier it is to implement - and the sooner it survives this procedure.

Lavender can be propagated from cuttings rather than seeds. This method is by no means as laborious as seed propagation and is also more promising. In addition, you can be sure that the desired variety is actually lavender - lavender propagated from seeds can look very different from the mother plant. You can remove the cuttings when cutting in spring and summer.

In addition to the propagation of cuttings, the cultivation of young plants via so-called lowerers also works very well with lavender. In contrast to cuttings, sinkers are only cut off from the mother plant when they have formed enough roots themselves. Until then, the mother plant continues to supply its offshoots with water and nutrients.

Sinkers take much longer to take root than cuttings. You should leave the young plant on the mother plant for about three to four months until it has firmly rooted itself. Then you can either leave them in place, move them or plant them in a pot. Due to the fact that the plant takes so long to root, lowerers should be set as early as possible - preferably in May or at the latest in June.

Lavender can be propagated in a number of ways, but dividing the shrub is usually not possible. Lavender could only be divided if it had rooted in several places in the ground. However, this is usually not the case. In addition, older lavender lignifies, which makes any division even more difficult.