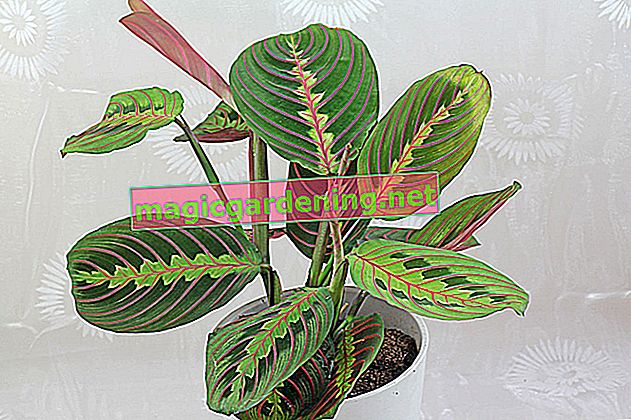 The arrowroot or basket marante - which is occasionally sold as colorful arrowroot - belongs to the arrowroot family (bot. Marantaceae) together with around 40 other species. The plants grow in the tropical to subtropical rainforests of Central and South America. The basket marante, for example, comes from northern Brazil and can only be cultivated as an indoor plant due to its need for warmth. The ornamental foliage plant is only allowed to go out into the fresh air during the summer months when the weather is appropriate, where it feels very comfortable on the balcony or terrace.

The evergreen shrub grows upright, herbaceous and forms a dense eyrie. The long-stemmed, large and strikingly drawn leaves of the Maranta drift straight out of the bulbous roots and hang over slightly. The basket margin is well suited for window sills, as it is only between 20 and a maximum of 30 centimeters high.

The oval to egg-shaped leaves of the basket margin are quite large with an average of ten to 15 centimeters. They are arranged alternately on the long stems and are conspicuously patterned with brownish to light green spots. The leaf veins in turn are red to pink in color. Young leaves typically grow upright, curled up, before they finally unfold.

With a little luck, the tiny white flowers of the basket marant will appear between April and May. Compared to the leaves, however, these are quite inconspicuous and appear only rarely and only in older specimens.

Maranta species develop small capsule fruits after flowering, but these appear very rarely in our latitudes. This is because fertilization by insects is necessary, but this rarely occurs in living room culture.

The basket marante is - like other arrowroot species - neither poisonous for humans nor for animals.

It is not that easy to find the right location for the Maranta, as the tropical plant requires conditions comparable to those in its natural location for healthy growth even as a houseplant. The perfect place is partially shaded, neither dark nor directly sunny. A lack of light leads to stunted growth, while an excess of sun rays in turn fades the beautiful leaf patterns.

In terms of temperatures, the Korbmarante feels most comfortable at a warm 23 to 25 degrees Celsius, which should also prevail almost all year round. It can only be a little cooler in winter, but the degrees shouldn't fall below 18 degrees here either. In addition, the plant must be protected from the cold of the ground and drafts. On the other hand, the humidity should be at least 60 percent all year round, which is why it is best to cultivate the basket marante in a bright bathroom or in a heated winter garden - here the required conditions are most likely to be met.

With regard to the potting soil, the Maranta is not quite as demanding as the location. Plant the plants in good humus-based potting soil - the higher the humus content, the better - and mix this with expanded clay (€ 17.50 at Amazon *) or perlite for better permeability. Alternatively, you can use palm or potted plant soil mixed with a little rhododendron soil, as long as it does not contain peat. Marants generally prefer substrates with a slightly acidic pH value and a high content of nutrients.

Since the Korbmarante is one of the shallow roots, it is best to plant it in a shallow container. This absolutely needs good drainage so that excess irrigation water can run off and waterlogging does not arise in the first place. Special plant pots with an integrated irrigation system are best. (€ 69.29 at Amazon *) These make watering difficult, as the plants only take as much water as needed. Hydroponics, on the other hand, is tricky: only young plants that grow in one from the start are suitable. A switch of older plants from soil to hydroponics, however, should be avoided.

Maranta do not have to be repotted annually. Only when the substrate is well rooted is it transferred to a slightly larger pot. Remove the stuck old soil as much as possible so that you can take a closer look at the roots. Be sure to cut away dried out or rotten roots before replanting.

When it comes to watering, basket marants are quite demanding, because the root ball should be kept as evenly moist as possible. Frequent bale dryness is just as bad for the plant as frequent wetness. Occasional drying, however, is tolerated. If you roll up the Maranta leaves sideways, this is a clear sign of a dried out root ball and should be removed with the help of a watering can.

Use only room-warm water with little lime content for watering - such as well stale or filtered tap water or collected rainwater - and provide the plant with plenty of it between April and October. Between November and March, on the other hand, watering can be more economical.

Since the basket marante needs high humidity all year round, you should either spray it daily with lime-free water or set up an indoor fountain. Alternatively, a shallow bowl filled with water can also help. Replace the liquid in it regularly to prevent algae from forming.

In the main vegetation period between April and October, provide the Maranta every four to six weeks with a liquid fertilizer for green or indoor plants. You administer this together with the irrigation water, alternatively you can also use a long-term fertilizer in the form of, for example, fertilizer sticks (1.45 € at Amazon *). Only after repotting does the arrowroot need not be fertilized - just like during the winter months between November and March.

A pruning is not absolutely necessary, but you can shorten the cut-compatible plant by up to two thirds of its mass if necessary. It will then sprout again. This measure is necessary, for example, to remove old, unsightly, discolored and / or dried leaves. All you need is clean and sharp scissors.

From spring to early summer you can propagate the Maranta by cuttings from the head. In order for the rooting to succeed, it is best to proceed as follows:

The small Maranta take root within five to six weeks and can then be transferred to a suitable substrate and possibly a larger container.

Maranta also needs temperatures of at least 20 degrees Celsius during the long, dark winter months. Under no circumstances should the degrees fall below 15 degrees Celsius. Now water significantly less, but don't let the plant dry out. Only from March is water gradually increased again. Fertilization can also be omitted in winter. Provide the plant with regular nutrients as soon as it shows the first new shoots in spring.

Anyone who, like the Korbmarante, has such high demands on their location and care, also quickly indicates if something does not suit them:

Pests such as spider mites or thrips, on the other hand, mainly occur when the humidity is too low. If you increase this, the nuisances often disappear by themselves. As a first aid measure, first give the basket a vigorous shower.

The arrowroot flour known to some amateur cooks is not obtained from the basket marante (Marante leuconeura), but from the related species Maranta arundinacea. So you don't need to dry the roots of your basket marante and grind them finely into flour to conjure up fine sauces.

Of the Marante leuconeura species, which is primarily cultivated as an indoor plant, four different cultivars are offered in addition to the species.

The Maranta cristata species can also be cared for as a houseplant, but it is far less common. It is also known as two-tone marante and has so far only been known to lovers.