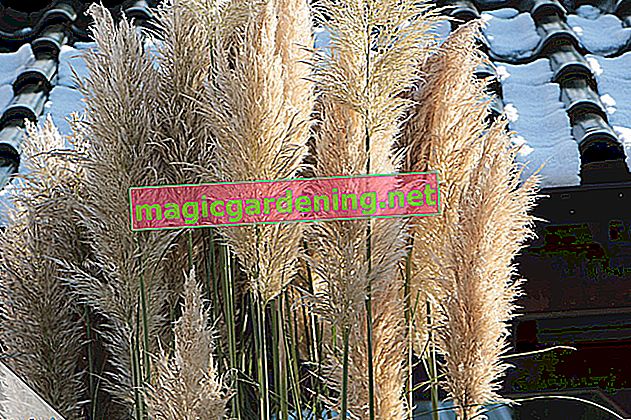 The other common German name for the mussel cypress is Hinoki-false cypress - and this name already resonates a lot about its origin. Right - the Chamaecyparis obtusa, as it is botanically called, comes from Japan of course. This is suggested not only by its name, which sounds so Far Eastern, but also by its artistic appearance, which is so typical of Japanese gardening culture. From a German point of view, the mussel cypress was first described by the botanists PF von Siebold and JG Zuccarini in the middle of the 19th century.

In their homeland, the mussel cypress has much more than just a decorative garden decoration use. Rather, it is also used for economic purposes because of its many other positive properties. For example, it contains valuable essential oils in wood and needles, from which the so-called hinoki oil is obtained. Their light wood, which smells wonderfully lemony, is also used in Japan as a noble raw material for sacred buildings such as temples and palaces, for shrines and also for table tennis bats.

Here, however, the mussel cypress is mainly only used for ornamental gardens. Above all, the dwarf forms such as the small mussel cypress are common in this country.

The mussel cypress belongs to the cypress family and therefore grows as an evergreen conifer. Their habitus is characterized by an expansive column shape and an original, somewhat idiosyncratic crown structure due to the somewhat irregular branching. The crown is already on the ground and forms conical, wide shoots. These are flat and fan-shaped, so that the broad, shell-shaped structures that give it its name emerge at the ends.

Shell cypress trees can reach a height of up to 40 meters - the dwarf shell cypress trees, which are more common in this country, however, reach a maximum height of 2.50 m and a width of around 1.5 m. They also grow very slowly. The trunk wood, which is light on the inside, is surrounded by a reddish-brown bark.

The short needle foliage of the mussel cypress has a typical cypress scale-like texture and attaches close to the shoot ends. These are spread open in a fan shape and appear to be pressed together - this is how the leaf groups form their typical shell-like shape. The color of the leaves is a deep dark green.

Basically, mussel cypresses naturally develop flowers and cones for the purpose of their reproduction. The cones have a dense, scaly, spherical appearance of about 8 to 12 millimeters in diameter and sit like nests in the shoot ends. The garden forms cultivated in this country are, however, sterile - so they neither develop flowers nor cones.

The mussel cypress prefers a more partially shaded place. Too much sun can damage it - nevertheless, you should make sure that it receives as much light as possible from all sides, otherwise it tends to grow irregularly.

This is of course not so easy, especially outdoors - with a southerly orientation, where the conifers are illuminated from the west and east and trees or similar in the south. is shaded, but it can easily succeed. With the bucket culture, the risk of stunted growth can of course be countered simply by turning.

You shouldn't put the mussel cypress in a rock garden - even if its Japanese appearance would look good in a Far Eastern gravel bed. She doesn't like the dryness and the high heat radiation of the stony bed surface.

The mussel cypress needs a permeable, fresh, moist and relatively humus-rich plant substrate. The pH value should be in the rather low, i.e. low-lime range. If you plant the mussel cypress in the open ground and find a rather loamy, heavy soil in the planned location, you should loosen and improve it well with sand and leaf compost. A drainage layer made of gravel is certainly not wrong either.

For the substrate in the bucket, you should use high-quality, nutrient-rich potting soil, which you loosen up with a portion of sand or coconut fibers and a little lava chippings. The mussel cypress in the pot is also happy about constant nutrients with compost.

Very few garden plants like to be transplanted, especially if they are grown outside. Shell cypress trees are no exception. Although they are very robust overall, their slow growth means that they do not easily gain a foothold in a new location. However, if you absolutely want to implement them, proceed as follows:

You should choose autumn as the time, when the conifers have their main vegetation phase behind them, but there are not yet any strong frosts. Dig up the root ball as generously and carefully as possible and place the tree in the new planting hole, which you have provided with a base bed made of a gravel drainage layer and sandy compost soil. Then fill the hole with humus-rich soil and press it firmly all around and pour vigorously. A layer of mulch on the top of the planting area is recommended to protect the stressed root system from damage caused by the cold and from drying out.

Refrain from cutting back to compensate for the inevitable damage to the roots. In the case of the slowly growing conifer, this is more debilitating than strengthening.

In principle, topiary maintenance is not necessary for the dwarf cypress trees cultivated in this country. They grow very slowly anyway and develop their characteristic structure best when left alone. Radical prunings in particular are not advisable for the conifer species, as it does not sprout from cuts in the old wood. Younger specimens, if their shape does not develop as you wish, can still be shortened in the outer parts of the spring. But never cut back more than about 3 cm.

However, like many other cypress species, mini shell cypresses are also suitable for bonsai cultivation in the garden. Especially in a front garden, an artistically shaped mussel cypress can be very decorative. For the design, it is particularly advisable to work with accurate foliage cutting. Stringent and regularly wired branches come into their own when the shapely needles are in precisely contoured bushes at the branch ends.

When wire trunk and branches, be sure to remove the wires from May, when the thickness begins to grow. This will prevent traces of wiring or ingrowth. You should fertilize a bonsai mussel cypress regularly during the growth phase.

Propagating a mussel cypress is not entirely trivial. Due to its generally slow growth, it is also not so vigorous when it comes to vegetative reproduction. Nevertheless, the cutting method is actually the only method of choice for private gardeners. You will not get seeds with sterile garden forms anyway.

You generally have a higher chance of growth with younger mother plants that are still in full sap. It can get very complicated with older copies. In late summer, cut the freshest possible shoot about 15 centimeters long from the upper part of the crown with a beveled cut. Defoliate it except for an upper pair of leaves. It is strongly recommended to dip the cut surface in rooting powder.

Put the cuttings prepared in this way in a planting bowl with humus potting soil. The chances of growth are highest if you have a (mini) greenhouse in which you can offer the cuttings an evenly warm, humid and protected climate. It should get a lot of light, but be protected from direct sunlight.

If the cutting forms new shoots, you have - or has ER - made it and has grown. Continue to cultivate it in the house or greenhouse over the winter. The young mussel cypress should only be planted outdoors after its first year of life.

The mussel cypress is very sensitive to waterlogging. If your planting base is not permeable and humus enough, it can be attacked by the fungus Phytpphtora cinnamomi, which causes the roots to rot and the plant to die. When planting, it is essential to ensure adequate drainage and good loosening of heavy soils with coarse-grained sand.

The mussel cypress can also be afflicted by the shoot deaths that frequently occur in conifers. You can recognize this disease by dying shoots and black dots on the affected areas. The death of shoots can be brought under control with a fungicide.

The mussel cypress can occasionally be attacked by scale insects or spider mites.

You can recognize scale insects, among other things, by the honeydew that they secrete when sucking on the juicy shoots of the mussel cypress. If you are not careful, sooty fungus can also nest under the honeydew.

If the scale insect infestation is still rather weak, first tackle the animals mechanically by removing them from the plant with a damp cloth or toothbrush. You can then treat the mussel cypress with a brew of nettles or tansy. If the infestation is more advanced, you can resort to oil-based preparations that cause the lice to suffocate.

These parasites are actually mostly houseplant pests. But they don't stop at the tasty shoots of mussel cypress trees either. They are easily betrayed by the fine webs with which they cover the branches and leaves of the host plant. With a structurally robust plant like the mussel cypress, you can work here with a strong jet of water from the garden hose. Spray them off thoroughly, several times if necessary. This should normally be able to get the infestation under control.

In the case of overly stubborn populations, you may have to cut off the infected plant parts and dispose of them as thoroughly as possible, preferably burn them. The use of predatory mites, for example in the form of the gall mosquito Feltiella acarisuga, is particularly ecologically sensible. They can only be used on planted mussel cypresses in summer, when the temperature is above 20 ° C. Only then do the beneficial insects have suitable living conditions. In addition, there should be high humidity.

The dwarf variety 'Nana Gracilis' is most common in specialist shops. But there are also a few other cultivated forms that differ from each other mainly in their leaf color and sometimes also in their growth habit.

In German, the variety is simply called dwarf cypress. Its growth is indeed dwarf - it reaches a maximum height of 3 meters and a width of about 2 meters. It shows a compact, well branched, initially spherical and later more conical growth. The horizontally protruding branches form dense needle bushes. The variety is also well suited for grave planting thanks to its compact, neat appearance.

This variety is also called coral cypress in German. This name already indicates its specialty: In fact, it forms coral-shaped twisted shoots, which give it a much more delicate appearance than most of its conspecifics. Her needle color is a cool teal. In terms of height and width, it is about as large as the Nana Gracilis variety.

The name says it all for this variety too: it is characterized by a golden yellow needle color, which gives it a fresh, delicate character. Its growth is also exceptional: it forms gently curved branches that extend from the ground with tapering tips and fine needles. This makes it resemble a fern. The Fernspray Gold is very slow growing.

The Aurora variety is also characterized by yellowish needle foliage and can therefore set a particularly attractive color accent, especially in combination with dark-leaved conifers. As with the Nana Gracilis, it grows quite bushy and compact, but becomes significantly smaller with a maximum height of one meter. In width it reaches 60 cm.

This variety shows a rather spherical growth and is slightly larger than the other dwarf varieties with a height of 3.50 meters. Their needle foliage has a fresh green color that turns brown in autumn.