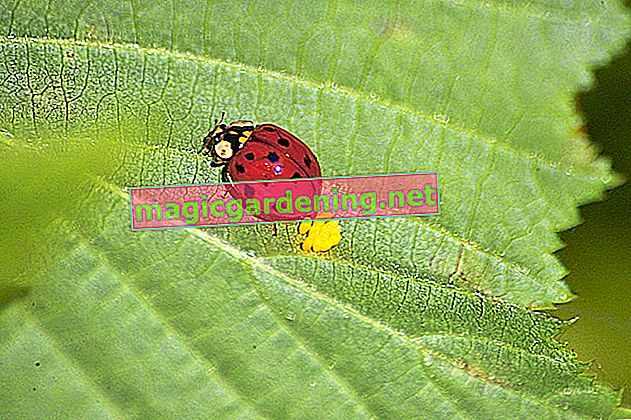 The fine diversity of ladybugs

Ladybugs are a very species-rich and diverse family of beetles. The 360 ​​genera worldwide and over 6000 species are only represented to a small extent here, but the species that live here already offer a wide range of different manifestations and ways of life.

In general, it is mainly the ladybirds of the subfamily Coccinellinae that occur in Europe. When studying their food, we therefore limit ourselves to the corresponding species. Externally, the Coccinellinae offer a fairly wide field of color phenomena, whereby the pattern and the colors can be summed up as something typical for ladybugs. From the classic black dotted tomato red to red spotted black, completely dotted monochrome or black dotted yellow, everything is included.

The eating habits of the Coccinellinae ladybirds are similarly varied. Here, too, there are fundamental similarities, as well as species-specific deviations and peculiarities. The vast majority of species prefer to eat very frequently and, above all, numerous garden pests. This includes:

With these culinary preferences, ladybugs are of course extremely welcome to every gardener, because aphids in particular are not really dangerous, but very annoying and, above all, never to be completely eliminated. Ladybugs cannot get enough of aphids. They are undoubtedly their No. 1 favorite food. A ladybug can eat 50 of these pests a day and is therefore only too happy to be found on heavily infested plants.

Incidentally, the larvae of the ladybird are even more effective at decimating aphids. After all, they have to become big and strong and therefore plaster up to a pleasant 600 pieces in their 30-60-day development time until pupation. One ladybug progeny can destroy around 100,000 pests per generation. So you would do well to make the ladybirds in the garden as comfortable as possible. More on this in the last section.

In addition to the common aphids, scale insects and spider mites, there are other pests on the menu of ladybirds. For example:

Cannibalism only appears scary in our human culture. In the animal world, however, it is quite normal. So it is also common among the friendly ladybirds. When the larvae hatch, the motto is: first come, first served. This means that the larvae that hatch first eat the best that comes in front of their noses. And that could be the nutritious sibling eggs right next door. As a result, a clutch can unfortunately decimate itself by about half. Usually, the larvae hatch pretty much at the same time.

When there is no more meat

In times of war and famine, we humans also get creative with alternative foods. And ladybugs, too, sometimes have to switch to other foods when the usual food supply is scarce in some years. When aphids, scale insects and the like run out, ladybugs find the emergency nail in vegetable food. Fruits and pollen, in particular, replace the otherwise protein-rich insect food with their sweet energy.

There is even a Coccinellinae species, the Bulaea lichatschovi, whose larvae are basically vegetarian, namely, they feed on pollen.

As if pest extermination weren't enough help for the hobby gardener, some ladybird species also curb plant diseases through their diet. Species of the tribe Halyziini and Psylloborini conveniently feed on powdery mildew and mold and can thus bring relief to diseased plants. Fungal species that occur in this country are mainly the sixteen-spotted ladybird and the yellow twenty-two-spot ladybird.

Believe it or not, there are actually ladybird species that are classified as pests because of their feeding habits. Because some species generally have a vegetable diet, not pollen, but rather from useful and ornamental plant leaves.

The herbivore ladybirds that are relevant in this country include the twenty-four-point ladybird. He is primarily targeting carnations, such as soap and glue herbs, cloves or clover, alfalfa, beets and potatoes. It only eats off the tops of the leaves, but it can do more damage.

How to attract ladybugs

The thing about attracting pests is a somewhat paradoxical thing - after all, ladybugs prefer to go where there are lots of aphids to eat. To promote aphids, which you actually want to decimate, is initially a contradiction. You can solve this, however, by reserving an extra zone in the garden for ladybugs - and aphids. By letting a back corner of your garden run wild and allowing aphids to develop freely there, you can also get enough ladybirds, which, thanks to their mobility, can also be useful in the rest of the cultural garden.

In view of the predominantly useful feeding habits of ladybirds, one would of course want them to