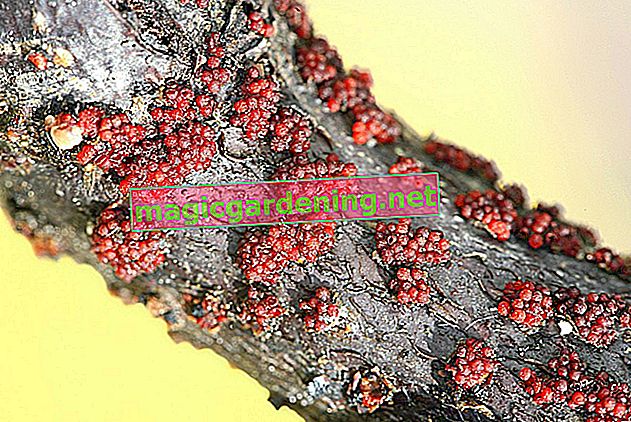 Tomatoes are sensitive plants. They need perfect growing conditions and optimal care, otherwise they will punish the gardener with all kinds of diseases and other annoyances.

What is flower end rot?

The characteristic symptoms of blossom end rot make one think of a serious fungal disease to which tomatoes in particular are very sensitive. In fact, it is not a disease, but a physiological disorder. This leads to the fact that the plant no longer absorbs sufficient lime from the soil and thus a calcium deficiency occurs. The exact causes have not yet been researched, however, there are many assumptions and empirical values ​​that gardeners can fall back on.

Blossom end rot occurs mainly on tomatoes, whereby - unlike the typical tomato diseases - only individual plants are usually affected. In the absence of pathogens, the disorder is not contagious - however, the tomato plants are in the same soil and can therefore develop the same symptoms if they also develop a calcium deficiency. You should treat this as soon as possible so as not to endanger the harvest. In this article, you will find out how you can identify and remedy a calcium deficiency in good time - so that, in the best case, the flower end rot does not even occur.

These tomato varieties are particularly affected

Basically, no tomato variety is immune from blossom end rot, but some are more at risk than others due to a lack of lime - and therefore calcium deficiency occurs more frequently here. The disturbance is typical for fast-growing tomatoes that develop very large fruits. Especially beefsteak tomatoes and oxheart tomatoes, but also many plum tomatoes and stick tomatoes have to struggle with blossom end rot. Due to their rapid growth and the large fruits, these varieties require a particularly large amount of nutrients in a balanced composition, which is why deficiency symptoms occur more quickly.

Blossom end rot is shown by characteristic symptoms on the fruits that only occur at the fruit base - which is at the tip and opposite the fruit stalk: Usually only the fruits are affected by the flower end rot, while the plant itself makes a healthy impression. In some cases, however, the tomato plant also shows poor growth with unhealthy, yellowish discolored leaves.

The symptoms mentioned mainly occur in the summer months between June and August, which is why you have to keep an eye on the plants and their fruits during this time. Take suitable measures against blossom end rot in good time, otherwise the tomatoes will fall from the bush and are no longer edible.

On hot summer days with temperatures regularly well over 30 degrees Celsius - which in a greenhouse can add up to more than 40 or even 50 degrees Celsius - light gray to brown spots sometimes form on the tomato fruits. This is a case of sunburn, in which the water-rich flesh literally overcooks under the action of the heat and the sun's rays and also loses a lot of its aroma. In contrast to flower end rot, these spots can appear anywhere on the fruit and also on the tomato plant itself and are therefore clearly distinguishable from calcium deficiency disease.

The direct cause of the frequently occurring flower end rot is a calcium deficiency (or calcium deficiency), as a result of which too little of the important nutrient is contained in the cell walls. Since calcium keeps the cell walls of plants strong and stable - analogous to the effect on human and animal bones - they lose their stability and finally collapse. The affected tissue turns brown and dies. A calcium deficiency has many causes: A deficiency can already occur in the soil, but an imbalance in the chemical composition or an unbalanced fertilization can also be the reasons. This is the case, for example, when the tomato plants are supplied with a fertilizer that has a high concentration of magnesium or potassium - both nutrients hinder the absorption of calcium. It is therefore imperative to ensure that you fertilize well - manure and compost are best for tomatoes anyway.

You can determine a calcium deficiency in the soil with a simple soil test, because such soils have a low pH value. For tomato cultivation, the soil should have a pH value in the neutral to slightly alkaline range, ideally around 7. If the soil is too acid, push it back into the neutral range by means of liming. Suitable means for this are listed in this table.

These lime fertilizers (€ 9.46 on Amazon *) are very suitable for treating flower end rot:

Are brown rot and flower end rot the same thing?

Late blight, brown rot and blossom end rot are completely different diseases. The dreaded brown rot is a fungal disease in which the fungicidal pathogen Phytophthora infestans penetrates the plant via rainwater or incorrect watering. Typical symptoms are rapid browning and withering of the leaves and the almost ripe tomato fruits. Prevent this disease by protecting your tomatoes from the rain. In addition, you should never water the plants over the leaves, but always directly on the ground.

The following video shows, in a nutshell, how best to counteract flower end rot:

The best prevention (and also treatment option) against flower end rot is the use of calcium-containing fertilizers. If the pH value of the soil or the potting soil is too low, you can lime the plants with primary rock flour, algae lime or simple garden lime (without any further additives). Simply sprinkle the powder around the tomatoes on the ground, work them lightly into the ground and then pour vigorously.

Alternatively, you can also administer the necessary lime in liquid form, for example with lime-containing irrigation water or calcium-containing liquid fertilizer for tomatoes. However, make sure that the composition is balanced, as limescale can lead to a lack of other nutrients, especially iron.

Another common cause of the development of flower end rot is incorrect watering, in which the tomato plants are only supplied irregularly with water and also often suffer from drought stress - this is particularly fatal for the vigorously growing varieties, as they are more sensitive and need a regular one Water supply are dependent.

Outdoor tomatoes, on the other hand, suffer from the constantly changing weather in changeable summers: sometimes cold, sometimes warm, sometimes damp, sometimes dry is the ideal potpourri that causes the blossom end rot.

But even in the greenhouse or on the sheltered balcony, the plants are not immune to this, because here it is the often high humidity that promotes the end rot. Calcium is transported with the water flow from the roots to the above-ground parts of the plant (and thus also in the leaves and fruits), which happens more quickly due to the evaporation of moisture. Evaporation promotes this process, so that the calcium gets to where it belongs faster. A low humidity helps. In principle, tomato fruits affected by blossom end rot are still edible; after all, it is not a bacterial or fungicidal disease. The brown spots only appear locally and can be easily cut out - provided they are not too big. The tomatoes can be used as normal and they don't taste any different than usual. You just shouldn't store these fruits, you should process or eat them immediately - the tomatoes cannot be stored because they get moldy quickly and should really not be eaten.

Can flower end rot also occur on other fruits or vegetables?

Not only tomatoes are affected by flower end rot, but in rare cases also peppers, chilli and zucchini. The same symptoms appear on the fruits of these plants, and the measures for control and prevention are the same.

The tomatoes are bursting, is that also a symptom of flower end rot?

No, because with this phenomenon the ripe fruits often burst after a rain shower or as a result of damp weather. They quickly start to go moldy, unless you pick them and process them immediately.

Since it is not a contagious disease, you can simply dispose of severely infected fruit on the compost.