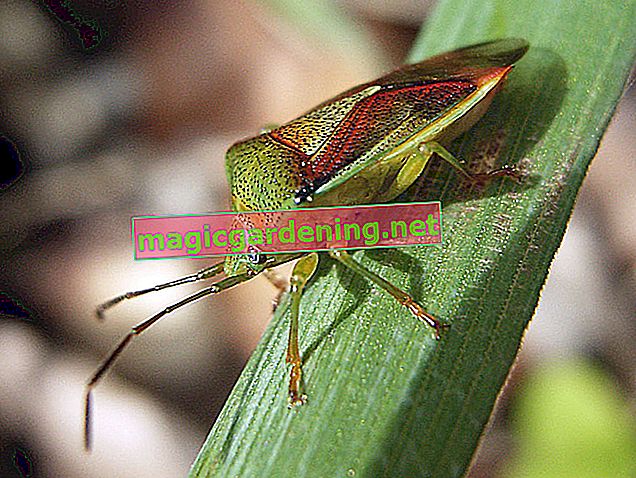 What are leaf bugs?

The term “leaf bugs” usually encompasses various types of soft bugs (lat. Miridae), which in turn belong to the zoological order of Schnabelkerfe (lat. Hemiptera). The mostly very nicely drawn animals - in contrast to other types of bugs - usually feed on sap and prick leaves and tender young shoots for this purpose. Juicy fruit - especially apples and berries - and sweet vegetables - such as peppers - are also very popular. Typically, leaf bugs multiply particularly strongly in warm and dry temperatures, so that in some years real plagues occur.

Around 40,000 different types of bugs are known worldwide, but not all of them live on plant sap. About 1000 different species of leaf bugs are currently native to Germany, with the following six species being particularly common in gardens and orchards. Many other species are not relevant as garden pests.

New species are migrating to Germany

For some years now, more and more species of bugs have been migrating from warmer climes to Germany, as climate change means that they now find ideal living conditions here too. The following SWR contribution shows very well what consequences this has using the example of the Asian stink bug (also: Marbled stink bug, Latin Halyomorpha halys): Youtube

While the nymphs often do not look particularly similar to the adult leaf bugs in terms of color or drawing, fully developed bugs of all species have the following typical characteristics:

The body shapes of the different types of bugs can be quite different: from rounded to oblong and narrow, practically everything occurs. The leaf bugs native to this area also differ greatly in terms of coloration and markings. The females of many types of bedbugs have an ovipositor, with the help of which they lay the eggs in the ground or in soft parts of the plant, depending on the species. The animals lay an average of 20 to 30 eggs, which are often grouped together as egg packets and are barely visible. Some species even do brood care and guard eggs and young animals.

After hatching, the young animals, known as nymphs, go through some developmental stages, at the end of which they always molt. The nymphs do not pupate, but with each moult they become more and more similar to the adult animals - called images. Often nymphs and images can be found at the same gathering point. The adults overwinter in sheltered, warm places and lay their eggs in the following spring.

What types of bugs are found in the apartment?

Leaf bugs love the warmth and therefore cavort in the garden and on the fruit trees, especially during the summer months. When it finally gets cooler in autumn, the adult animals - the so-called images - look for a place to hibernate. To this end, they often get lost in apartments, for example like to hide in roller shutter and curtain boxes. If you find such an animal, do not catch it with your bare hands. Instead, let it crawl onto a sheet of paper and then put it back out in the garden.

Other types of bugs, however, feel very comfortable in an apartment all year round. These include blood-sucking species such as the house bug (lat. Cimex lectularius) or predatory bugs such as the "masked rascal" (also: predatory or dust bug, lat. Reduvius personatus). These species can bite or sting and should therefore not be touched with unprotected hands.

What do leaf bugs eat? Most of the native leaf bug species feed on sweet plant saps and for this purpose pierce the pathways on the leaves of various deciduous trees, but also of other useful and ornamental plants. In addition, they often attack various types of fruit, including mainly soft fruits such as blackberries, raspberries and strawberries. Furthermore, apples and pears as well as vegetables such as potatoes, beans, peppers and cabbage are at risk. Most leaf bugs are not pegged in terms of their preferred food crops.

Occasionally, however, the winged insects suck out other, mostly dead insects as well as (live) aphids. In addition, some species can even taste the eggs of other insect species.

Bedbugs, regardless of their type, become active when it is warm. When it gets colder, they retreat to their hiding places.

A leaf bug infestation is easy to identify. The following indicators indicate the pests:

If the symptoms mentioned occur in warm to hot and dry weather, an infestation with leaf bugs is likely. Another characteristic is the penetrating smell, reminiscent of coriander, which emanates from the animals' stink glands. It is not only the so-called stink bugs that stink, but also all other types of bugs.

What can you do against a bedbug infestation?

The different types of bugs can all be controlled in the same way.

From early spring to autumn, the leaf bugs can be removed from the plants by shaking them off or picking them up. It is best to carry out this admittedly time-consuming (but all the more gentle) procedure in the early morning hours when it is still cool and damp. Then the animals, still rigid from the night, are easy to catch.

Always wear gloves when collecting, as many types of bedbugs give off smelly secretions in dangerous situations. The strong, unpleasant smell stays on the skin for a long time.

Hosed down with soapy water A tried and tested remedy not only against leaf bugs, but also against many other pests is soapy water that you have made yourself. You can prepare these as follows:

But be careful: many ornamental plants with delicate, soft leaves do not tolerate soapy water. It is also better not to treat salads, leafy vegetables and other plants intended for consumption with them.

Neem oil, which is obtained from the fruits of the Indian neem tree, is also an effective remedy against leaf bugs and other pests. If you spray the infected plants with the agent at intervals of several days, the adult animals as well as their larvae and eggs will die. But neem is only to be used with a very strong infestation, because although plant-based, it is a strong insecticide, which also has a negative effect on other beneficial insects and other animal species.

The same applies to the also very effective paraffin oil, which not only kills leaf bugs, but also ladybugs and other beneficial insects by suffocation. In addition, this agent is not suitable for crops, as they can then no longer be consumed.

Which insecticides help against leaf bugs?

Chemical insecticides should only be used in emergencies and when nothing else helps. These agents cause lasting damage to flora and fauna and should be avoided, especially in vegetable and fruit gardens. If necessary, use sprays containing the active ingredient thiachloprid, as this is comparatively harmless to bees.

Preventive measures are extremely important in order to counter a pest plague from the outset. The following approaches are suitable for containing leaf bugs:

Leaf bugs are not dangerous to humans or pets.

As a rule, leaf bugs do not sting or bite, after all, humans are not part of their natural diet. In the event of danger, the insects instead secrete a stinking secretion, the smell of which is difficult to remove from skin, hair and objects.

Are fire bugs poisonous to dogs?

Fire bugs and other common leaf bug species are not poisonous, either to pets or to humans. This also applies to the stinking secretion, which is unpleasant but completely harmless.

Which predators do leaf bugs have?

If you want to keep the bedbug infestation low in your garden, you should make it comfortable for songbirds and smaller, insectivorous animals (for example toads). These animals feed on leaf bugs and other pests. In addition, predatory bugs (lat. Reduviidae) also like to eat their sap-sucking relatives, but can spread diseases such as Chagas disease.

A close-meshed insect net, which you spread over fruit and berry trees, also keeps the bug population in check. But be careful: songbirds sometimes get caught in these nets and can no longer free themselves.