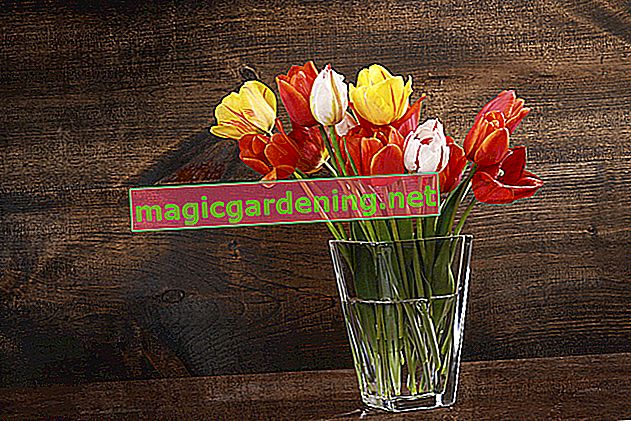 Soft, light-colored hairs would be a sure sign of the onset of mold growth, which would infest the entire pot ball after a very short time. However, the mold spores are not entirely harmless to human health either. No cosmetic treatment helps here, the plants now have to get out as quickly as possible, outside.

First, carefully take the infected pots outside with you, empty them completely and remove the soil residues from the roots (with vinyl gloves!). In the event of severe infestation, the root balls can be rinsed with lukewarm water before your houseplants can move back into new, high-quality potting soil and thoroughly cleaned pots. In principle, there are only two possible reasons for the onset of rot in the planters:

In the case of cheap soil (usually with an even cheaper composition), there is also the fact that it is out of balance due to its poor ventilation and tends to form as soon as its airtight film packaging has been opened. So buying branded earth would probably have prevented the decay from rotting?

That was the title of a very representative potting soil comparison published by Stiftung Warentest in 2014, which then came to the conclusion that the quality differences between the individual varieties were enormous. Soils with and without peat were assessed, both from trademarks of the well-known DIY stores and garden centers (e.g. Kölle, Dehner, Toom, and Obi) as well as branded goods (from Compo, Floragard and Neundorff). Of the 19 products (price per 20 kg between just under 1.50 to 10.00 euros), one variety has just achieved a “Very Good”, five were “Satisfactory”, two “Sufficient”, one variety (with just under 6 .00 euros) even poor, the rest “good”.

Potting soil with a high proportion of peat and coconut means less dragging and because of the high proportion of renewable raw materials (between 70 to 100 percent) it initially sounds good. Nevertheless, a year later, this time the testers from “Ökotest” reported that even the light potting soil was not convincing. The comparison in the shorthand:

Surely you already guessed it, it is your own compost as an optimal means for soil improvement but also for the near-natural cultivation of plants of all kinds. Ökotest and BUND even strongly advise to avoid peat as a component of potting soil. The arguments for this are basically understandable and not only because peat-free gardening protects our climate. In order to understand everything a little better, you can download a very informative leaflet free of charge from the BUND portal.