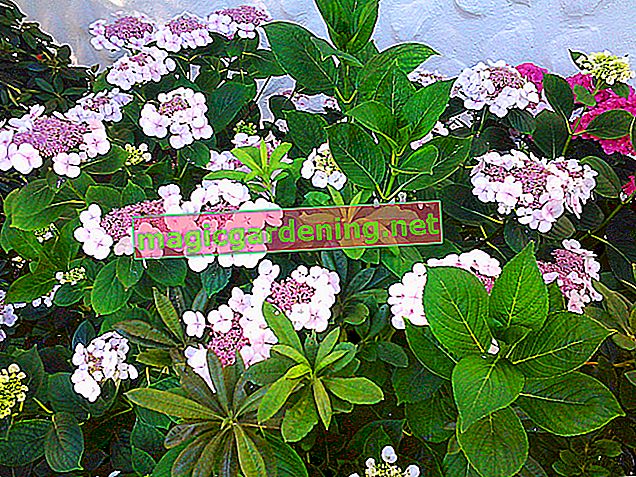 The genus of silk plants comprises around 200 different species, the majority of which are native to the New World - that is, in North and South America. Some varieties also occur in southern Africa between Tanzania / Zimbabwe and South Africa. Some species - such as the common milkweed - now grow as neophytes in many other areas of the world. The genus is assigned to the dog venom family (bot. Apocynaceae).

Most milkweed are perennial, herbaceous plants. Only a few species are only annual. Depending on the species, Asclepias plants reach heights of between 70 centimeters and two meters. The strong rhizomes from which the plants form numerous runners are also typical. Planted out in the garden, they quickly overgrow larger areas, which is why you should definitely install a root barrier when planting.

Visually, the maximally short stalked, but up to 17 centimeters long leaves are somewhat reminiscent of rubber tree leaves. They are typically elliptical to oblong and hairy in most species.

The mostly multi-flowered umbels appear between June and August and shine in strong colors such as pink or orange. Pollination is carried out by insects, especially bees and butterflies, especially since silk plants are valuable bee and butterfly pastures.

For each fertilized flower, two spindle-shaped follicles develop, which usually stand together like two horns. These are densely packed with numerous flat seeds, which in turn are covered with up to four centimeters long, silky hair. The hair, called coma by botanists, is used to spread the seeds by wind, and the silk plants owe their species name to it.

Like all dog poison plants, silk plants are poisonous to both humans and animals. The leaking latex can also cause skin irritation.

Silk plants prefer to be in full sun, although some species also feel comfortable in light partial shade. It is best to put specimens cultivated in pots outdoors during the summer, but you should slowly get used to the stronger sunlight. The large amount of space required is also important: Since the perennials can get quite high and also proliferate diligently via underground root runners, you should plan a planting distance of at least 50 centimeters when planting beds. Container plants need a correspondingly wide pot.

Silk plants planted in the garden feel comfortable in humus rich and well-drained soil with a low proportion of clay. The perennials will grow better if you mix some compost into the excavated earth when planting. A humus-based container plant substrate is suitable for potted plants, which you can make more permeable with perlite (€ 32.90 at Amazon *) or expanded clay (€ 17.50 at Amazon *). A good pot drainage should not be missing to avoid waterlogging. To do this, the planter needs a drainage hole at the bottom of the pot, and as the bottom layer, fill in a drainage layer made of coarse, inorganic material such as gravel or potsherds.

Milkweed species that are not or only partially winter hardy should only be cultivated in pots if possible. In this way, wintering is no longer a problem - unless you only want to care for the plants for one year anyway. Repot tubs into a larger container and / or fresh substrate about every two to three years.

Only hardy varieties or specimens that you dig up before the first frost and then hibernate frost-free afterwards should only be planted in the garden. The hardy silk plants in particular need a lot of space in the garden, but can be prevented from uncontrolled growth with a root barrier.

To make it easier for the plants to take root, place them with the bare root ball in a bucket of fresh water before planting / potting. As soon as no more air bubbles rise, the plant is ready to be planted.

For healthy growth, silk plants depend on an adequate supply of water and nutrients, which is why you should regularly water and fertilize specimens cultivated in pots. Always keep the substrate slightly moist during the summer months, but avoid excessive moisture - this can lead to rot. Excess irrigation water must not remain in the saucer either, but must be removed promptly.

Silk plants planted in the garden need protection from moisture in winter, whereas in summer a layer of mulch protects against drying out. Fertilize the plants with a liquid container plant fertilizer about every two weeks between April and September. Hardy garden specimens, on the other hand, enjoy plenty of compost in April, June and the beginning of autumn.

Regular cutting of the silk plants makes sense for better branching and thus a more bushy growth as well as more abundant flowering, especially since you counteract balding in the perennial species in this way. For a longer bloom, what has faded should also be cleaned regularly. In addition, the pruning-compatible plants can be cut back to a height of around 20 to 25 centimeters before they are placed in the winter quarters, thus taking up less space. They sprout again in spring.

Silk plants are very easy to propagate by sowing, proceeding as follows:

The young plants can finally go outside from the end of May when the danger of night frosts has been averted.

Older specimens can also be multiplied by division after flowering. To do this, dig them out together with the rhizome and divide them with the help of a sharp knife. Then insert the individual pieces again separately.

Even if silk plants are often touted as hardy: Most species are not or only to a limited extent. These varieties die above ground over the winter months, but usually sprout again from the underground rhizomes in spring. So that these do not freeze to death in frost, you should cover the root area with brushwood in autumn. It is also important that the plant is protected from moisture in the cold season.

Non-winter-hardy species or specimens cultivated in pots, on the other hand, are light and frost-free, but should be wintered cool at around ten to 14 ° C. Bring them to their winter quarters in autumn as soon as the temperatures drop permanently below ten degrees Celsius. Water the plants only a little in winter and do not fertilize them. In spring, temperatures of less than 12 ° C or late frosts can be problematic: These delay new shoots or ensure that the plant sheds its leaves. Then the flowering will start later.

Only the following types of milkweed are sufficiently hardy and suitable for planting in the garden:

However, these species also depend on a favorable, protected location and light protection from the sun - such as a generous cover with spruce branches.

Diseases rarely occur in silk plants, only root rot caused by excessive moisture can become a problem. In case of doubt, in particular, water your potted plants too little rather than too much. Furthermore, the different species are susceptible to being infested with the whitefly. Aphids also like to settle on the large leaves.

If the leaves turn yellow in winter quarters, the plant is probably too warm. Temperatures of more than 12 ° C during the winter break weaken the crop and lead to diseases.

Of the numerous types of silk plants, these are the main ones that we cultivate:

This species, also known as the Curaçao silk plant or silk flower, is not hardy and can therefore only be cultivated as a container plant or as an annual in the garden. Between June and August, the species, which grows up to 100 centimeters, is delightful with its red-orange flower umbels.

The common milkweed is also known as the parrot tree or parrot plant. because their unripe fruits are vaguely reminiscent of a budgie. The hardy species is suitable for outdoor cultivation, but can also be cared for in a bucket. The plant reaches heights of growth of up to 200 meters, has large leaves and flowers in numerous pink umbels from June to August. The shrub, which is still rarely found in ornamental gardens, is a valuable bee forage plant.

The swamp milkweed also magically attracts bees and butterflies. The species thrives in sunny to partially shaded locations on moist to swampy surfaces. It is particularly suitable for planting on the banks of garden ponds or other ornamental waters.

The flowering species with striking orange umbels - which is why it is sometimes referred to as orange milkweed - prefers stony, dry ground and sunny locations. The species popular in ornamental gardens is only partially hardy in this country and always needs light winter protection. However, it is also suitable for bucket culture, but then has to overwinter protected from frost.