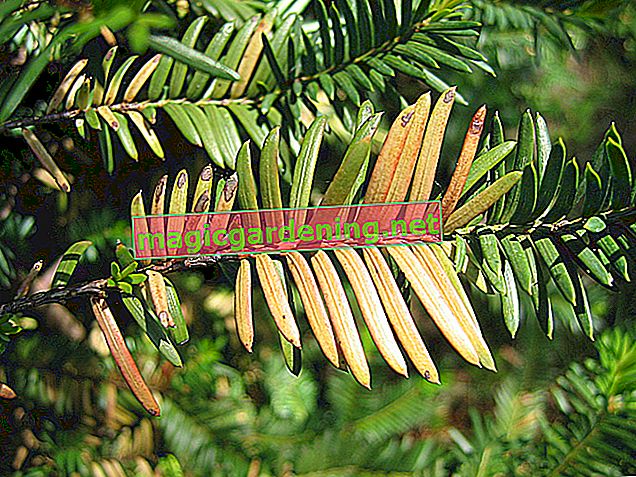 However, throwing the needles is not always pathological, but sometimes quite natural. The needles of the conifers are thrown off at regular intervals anyway, so that the tree can form new needles. Since this process takes place continuously, it is only noticeable sometimes - for example, when a tree sheds a particularly large number of old needles in one year. How often this happens depends on the specific tree species: Pine needles, for example, are renewed every three to five years, while pine needles can remain on the tree for up to eleven years.

However, if the tree suddenly sheds numerous needles that previously turn yellow to brown and may also show other causes of the disease, then there is a more serious problem behind it. Finding the exact cause is not always easy.

Many conifers shed their needles in periods of long drought, which is especially the case in late summer. But also dry frost (especially in connection with bright sunshine!) As well as watering too seldom for potted plants leads to needle shedding due to lack of water. Solution: water the conifer through it.

But the opposite can also lead to the needle dropping if the tree is permanently in too moist soil. There are many reasons for this: frequent watering, heavy rain, insufficient drainage, compacted soil ... in this case, the only thing that helps is to provide drainage afterwards and to improve the soil sustainably.

Conifers want to be carefully fertilized because they are very sensitive to both an undersupply and an oversupply of nutrients. This also applies to pollutants from the air, as these are stored in the leaves and can literally poison the tree from there - after all, the needles often stay on the tree for years.

Tree does not grow after (re) plants

A needle drop is not uncommon after planting or transplanting and indicates difficulties with the growth: The tree often has to feed the upper parts of the plant that have not been cut back with a reduced root ball, which it cannot manage. This can be remedied by pruning and watering thoroughly.

Plant lice and spider mites, in particular, often cause the needles to turn brown and shed them.

Another cause of the discoloration and the shedding of the needles is the limitation of the root space, for example by walls or foundations. In this case, the tree can often no longer absorb enough water and nutrients.