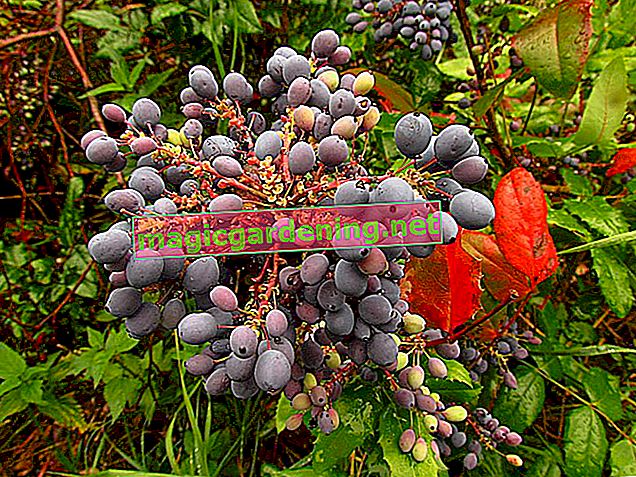 Are there plants that are similar to the holly?

There are some plants with blue berries that, at least at first glance, have a certain resemblance to the holly. This includes, for example, the common or thorn-leaved Oregon grape. It is often confused with the European holly because it prefers the same location.

The Oregon grape has similar dark green glossy leaves with thorns like the holly, but belongs to the barberry family. Their flowers are mostly yellow. Many parts of this plant are poisonous, but the berries can be used to make jam. The Oregon grape could be an alternative to the very poisonous holly, especially in the family garden, where small children and pets play.

The fruits of the holly are an important food for the birds, as they stay on the bush well into winter, but they are poisonous for humans. Eating just a few berries can be fatal for young children. Pets are also not allowed to eat the fruit. In dogs, two to three berries are considered a lethal dose.

What symptoms of poisoning does the holly trigger?

The symptoms of poisoning caused by the ilex berries are similar to those caused by other plants. Digestive problems such as nausea, vomiting and diarrhea develop. Cardiac arrhythmias, paralysis and kidney failure occur later or in particularly sensitive people. Just two berries are enough to poison an adult.

If you have a “holly” with blue colored berries, then it may be the similar looking common oregon, also called holly-leaved oregon. This plant mostly blooms bright yellow.