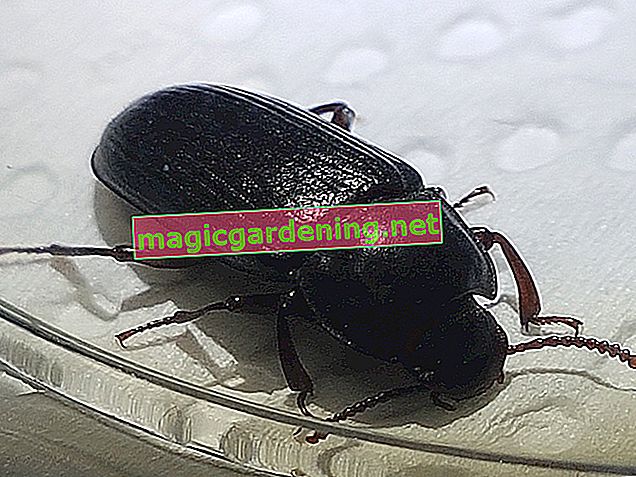 Identifying beetles in the home - an overview of types When small bugs appear in the apartment, the horror is great. Peaceful coexistence is not an option, because numerous mini-beetles make themselves unpopular as storage pests. Other types of beetles target textiles, carpets, furs, furniture or house plants. There is a great desire that the uninvited guests pull the leash as quickly as possible. The correct procedure is closely linked to the question of which type of beetle is making life difficult for you. The following table summarizes important properties that you can use to accurately identify bugs in your home:

The all-clear can be given for all of the above-mentioned bugs with regard to a possible health hazard for humans and pets. Accidental consumption of storage pests or direct contact with material pests usually leaves those affected without a trace (with the exception of allergy sufferers). Bread beetles and fellow beetles are not poisonous.

The table above names common small brown beetles that make their homes in the home. Have the characteristics mentioned put you on the right track? Then please consult the following short portraits and pictures with more detailed information:

Bread beetles are tiny and difficult to pinpoint with the naked eye. A closer look with a magnifying glass is advantageous. The entire body is double haired. Rough, erect hairs rise above close-fitting hair, making the mini-beetle appear furry. As generalists among apartment beetles, adult bread beetles and their larvae contaminate foods of all kinds, such as flour, coffee, cocoa, muesli, rusks, cookies, legumes, herbs and chocolate. Leather, paper and books are also on the menu, which is where the middle name bookworm can be traced back to. As the most feared grain pest in Europe, the grain beetle has no qualms about invading apartments. The trademark is an elongated trunk as a head extension. At the end of the trunk there is a powerful mouth tool that the beetle uses to eat grains. A pattern of longitudinal rows on the abdomen is characteristic. Its larvae are 2 mm in size, white and soft and eat grains from the inside out. The parquet beetle reveals a strikingly slim, rod-shaped shape. As with all sapwood beetles, its head is clearly visible and not hidden under a pronotum. The last two links of its antennae are conspicuous and, as typical antenna lobes, are greatly enlarged. Parquet beetle larvae are creamy white, curved and up to 6 mm long.

Ladybug-like beetles - who is this?

In autumn, hosts of ladybugs-like beetles gather on house facades, window frames and balcony railings. These are Asian ladybirds (Harmonia axyridis), also known as harlequin beetles, which look very similar to native ladybirds. On sunny October days in Indian summer, gigantic mass gatherings can be observed more and more frequently, which put concerned apartment owners on the alert. There is no cause for concern, because Asian ladybirds are not poisonous or harmful to health, but are only looking for winter quarters in cracks in walls or rafters. With fly screens you can prevent harlequin beetles from accidentally crawling into the apartment through the open window.

The properties in the table above provide initial information. The following short portraits dispel any final doubts about the true identity of black mini-beetles in the apartment. The dark to black fur beetle not only destroys fur and woolly materials, but is itself covered with furry hair. The actual pests are not the adult beetles, but their larvae. A female fur beetle lays up to 50 eggs near potential sources of food for the brood. Within a short time, the eggs transform into 15 mm long, golden yellow, hairy larvae that eat away at furs, feathers, carpets and woolen textiles.

Black is just the basic color of the carpet beetle. The material pest creatively spices up its look with different colored scales. A red band can often be seen along the wing seam. The upper wings are decorated with three light transverse bands. Some carpet beetles have opted for yellow drawings that contrast beautifully with the black background.

From the family of weevils, primarily the black weevil dares to break into human homes. The black beetle ignores food, textiles, wood and carpets. However, the beetle invasion does not end well for your lovingly tended houseplants. Unless you catch the nocturnal black vine weevil in the act, you will recognize its presence by the bay-like feeding damage along the leaf edges.

The ability to fly is not a reliable indicator for identifying brown or black beetles. In fact, flying bugs in the apartment can also be cockroaches. Black-brown cockroach bodies look very similar to real beetles.

Beetle in the apartment - what to do?

The means you use to combat beetle infestation in your home depends on whether it is a question of store pests, material pests or plant pests. It is not necessary to reach for the chemical club under any circumstances. The following table summarizes tried and tested home remedies against the rabble of beetles:

Don't just fight symptoms in the form of contaminated food and damaged materials. Beetles in the apartment are extremely likely to reproduce and spread again in no time at all. Therefore, please go to search for the source of the cause. In the case of storage pests, this can be freely accessible food. Material pests often find their way into the home through used, second-hand goods. Most beetles can fly and use tilted windows without insect screens as an entrance gate.

The video below demonstrates the simple and non-toxic methods you can use to get rid of bread beetles in your home:

We have small brown bugs in the apartment - what to do?

If there are many small brown beetles in the apartment, you are very likely dealing with bread beetles. The tiny pests target most foods and do not disdain paper or leather. Carefully examine all supplies and the bookcase. Infested food can be disinfected in the oven at 60 ° Celsius or in the freezer. We recommend disposal in the garbage can. Then clean the entire apartment, look for the source of the cause and eradicate it.

What kind of small brown beetles with long antennae are in the apartment? It is difficult to pinpoint the beetles without direct visual inspection. Common beetles with a brown color and long antennae are the dreaded longhorn beetles, especially the house longhorn beetles (Hylotrupes bajulus). With a length of up to 28 millimeters, this beetle cannot, of course, be described as tiny. The second candidate does not come from the Beetle family, but looks confusingly similar to a Beetle. It is the German cockroach (Blattella germanica), also known as the cockroach, whose antennae are longer than the entire body of the insect.

How can you prevent beetle infestation in your home?

The best way to prevent food pests such as bread beetles and grain beetles is to keep food in sealed containers. Immediately transfer loose foods to Tupperware, such as flour, sugar, muesli or coffee. You can keep material pests away by washing textiles before mothballing them and then storing them in airtight garment bags.

Small brown insects in bed are a completely different caliber than small brown bugs in the apartment. Bed bugs are 5-7 mm in size, flat-oval and extremely biting. Red, itchy wheals in the morning are the first indication of the dreaded vermin in the home. With home remedies you are at a loss in this special case. A certified exterminator solves the problem.