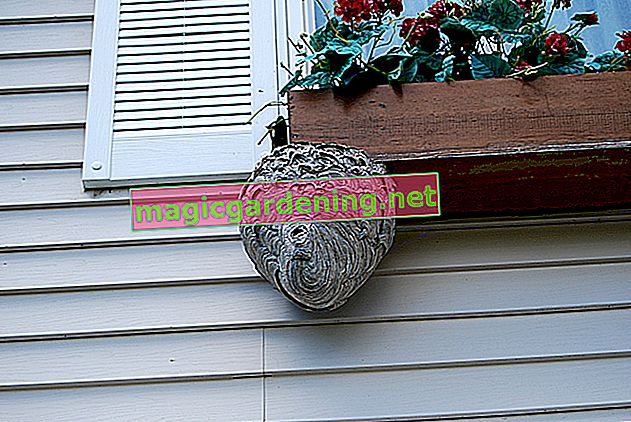 Remove hornet's nest - not without permission

In many cases, hornet nests are quickly discovered, after all the animals prefer to build them at dizzy heights. The only question is: How do you get rid of the nest? Anyone who has small children who play a lot in the garden, or who are allergic to wasp and hornet poison, quickly gets scared at such a sight. What if you get stung all the time? Before you panic and grab the garden hose or construction foam and in this - incidentally very risky way - kill the animals and thus the nest, you should be aware of this fact: the independent removal and killing of hornets - and by the way also of wasps, bees and other insects - is strictly forbidden according to the Federal Nature Conservation Act and can be punished with fines of up to 50,000 EUR.So, first of all, you have to leave the nest where it is.

Removal of the hornet's nest is only possible in exceptional cases, but only by qualified experts and after official approval. You will receive this approval on an informal written application to the district office responsible for your region or the lower nature conservation authority at the city administration. In this letter, on the Internet, you will find various forms that you only need to print out, fill in and hand in, the following information must be given:

In addition, if you have one, you should also submit a copy of your allergy passport - you will be asked for this anyway when specifying the reason “insect venom allergy” - and, if applicable, medical certificate (s) of hornet stings that have already occurred. Photos that show the size and location of the hornet's nest are also helpful. But be careful: You are not entitled to have your application approved!

As soon as the official approval is available, commission a specialist for the planned removal of the hornet's nest. This can be the local fire brigade (they also have other things to do and not always time!), But also a beekeeper or a pest control company. As a rule, the nest is not destroyed and the animals are killed; instead, they are relocated to a location at least four kilometers away. Do not undertake the removal or the relocation on your own, it is better to leave it to the professionals in their protective suits! These appear in full protection, as the hornets will of course not endure this intervention without resistance. As a rule, the animals and their nest are caught and removed using a special suction device.

Who pays for the relocation of the hornet's nest?

You bear the costs of relocating the hornets' nest yourself. You have to reckon with around 150 to 250 EUR, depending on the provider and region. This practically covers the expenses of the expert, whereas when you are on a fire brigade you often only pay a fee for the coffee cup. However, the men and women of the fire brigade - especially when it comes to a voluntary team - have their hands full, especially during the summer months, so that a hornet's nest is not exactly on the priority list.

Can't you get hornets to move yourself?

As long as you don't damage or disturb the nest or the animals, you can try a scaled-down version of relocation. This should have the best chance in spring, when the queen is looking for a suitable nesting site and wants to start building the nest in a place that is unsuitable for her. If, on the other hand, the nest is already complete and populated, the probability of a move is low - unless the hornet colony grows so large that it divides. This phenomenon, called "branch formation" by biologists, occurs only very rarely. To get hornets to move, you should:

In any case, the hornet's nest only lasted for a few months, because the colony dies completely in autumn. Only the young queens overwinter - mostly near the old nest, perhaps in a piece of rotten wood or in a hole in the ground - while the workers and the drones have disappeared by October at the latest. As soon as there are no more hornets in the nest, you can carefully remove it without permission - it will no longer be used anyway. In this case, protective measures are of course no longer necessary. As soon as you have completely cleared away the nest, take a very close look at the place and close any entry holes. In this way, the hornet queens cannot build another nest for the next year.

Prevent the construction of a hornet's nest

"With cultivar, we are observing the dramatic decline in insects - and we are killing ecologically important species such as hornets and wasps just because we are afraid of them."

Because hornets like to stay where they are: old nests are not reused, but new ones are often built near them. So if you already had a hornet's nest in the garden or on the house this year, you should use the winter months for repair and clean-up work. If the young queens do not find optimal conditions on site in spring, they fly on and look for another spot. From around the beginning to the middle of April, or earlier or later depending on the weather, the young queens wake up from their hibernation. During this time they are often still weak and easy to find. They often crawl around the garden. First of all, the animals look for food to regain their strength. But they also look out for a new nesting place very quickly. So keep your eyes open in spring and watch hornets flying around in the garden: If the up to three centimeters long and conspicuously colored queen repeatedly flies to a certain object, she will start building the nest there. Now is the time to step in.

The animals like to build their nests on trees, but also make do with structures rich in wood such as garden sheds, attics, barns and sheds or cladding of walls and roofs. Cavities, such as those found under canopies, in roller shutter boxes or in bird nest boxes, are also used. Hornet nests are brownish in color and have a structure reminiscent of paper. They are open at the bottom because the animals deposit their excrement at this point - and with around half a kilogram of insects eaten per day, there is quite a bit of excrement! Place a bucket under the nest here to prevent damage. How to prevent nest building

Hornets need rotten wood to build their nests, which they chew, salivate and finally stick together. This is how the paper-like structure is created. The first thing to do is to clear away rotten wood during the winter months. Cavities in cladding, canopies, etc. must be carefully searched for and sealed so that the queen cannot find a suitable place for her nest. If you see them flying around in a certain area more often, check this and close any entry holes there. You can also make such places unattractive for the animals by scenting them with clove oil. Hornets don't like this scent at all and try to keep a distance as possible.

Now, there is a reason why hornets are under nature protection: Thanks to persistent control measures, the animals were on the verge of extinction and are still very rarely found in many regions today. So you can ensure the survival of the species - and at the same time do something good for yourself, because the predatory hornets catch many other unpopular insects such as wasps and mosquitoes, at the same time they serve as tasty food for numerous songbirds themselves - and in a safe place in the Install a hornet nesting box in the garden. Choose a quiet spot by an old tree, for example, that you or others do not spend too often near. Rotten wood that the animals can use to build their nests can also be left lying around here.

If you are liable for damage such as B. stab wounds in others, such as assuming a hornet's nest on your own property?

Do you have a hornet's nest in your garden and a neighbor who threatens you with the worst consequences if you don't remove it? Inform them in a friendly but specific manner that it is illegal to remove hornet's nests and also that a permit is required for this - and that it cannot be obtained easily. Furthermore, you do not have to worry about any consequences, no matter how the neighbor may threaten this: If he is stung by a hornet, you are not liable for it. That would then fall under the very personal bad luck of the neighbors, since they have to accept the hornet people.

Correct handling of hornets and their nest In any case, the risk of a hornet sting is very low, because these are peaceful animals. Hornets are more likely to flee and only sting when they feel attacked or when their escape route is cut off. Nothing can happen to you as long as you follow these rules:

No. Contrary to their devastating reputation, hornets are not aggressive towards humans if left alone.

Quite apart from the fact that you are violating the law and making yourself liable to prosecution, it is also extremely dangerous: If you try to kill the animals with means such as smoke, water or construction foam in the nest, you will never get them all at the same time - and what is left of it is likely to be pretty pissed off and then make your life difficult in turn. Such stressed animals remain aggressive and then actually pose a threat - what they wouldn't be if you just left them alone. In addition, you can expect to be stung quite often when you implement your project.

How likely is it to be prosecuted for illegal nest removal?

Where there is no plaintiff, there is no judge, it is often said. In fact, you don't have to be caught and punished, but you can. An unpopular neighbor who is not on your side anyway - or who simply has a heart for animals, is enough. Many municipalities also send their employees on patrols to look for suspicious activities and to do this by asking around in the neighborhood. Whether you will actually be fined EUR 50,000 is less likely - only how much you actually have to pay depends on the gravity of your offense and the regulations in your community.

Hornets can be kept away from the house and terrace quite well if you cultivate plants such as basil, tomatoes, lemon balm, lavender or incense there. These can be maintained very well in pots and decorate any terrace or window sill.