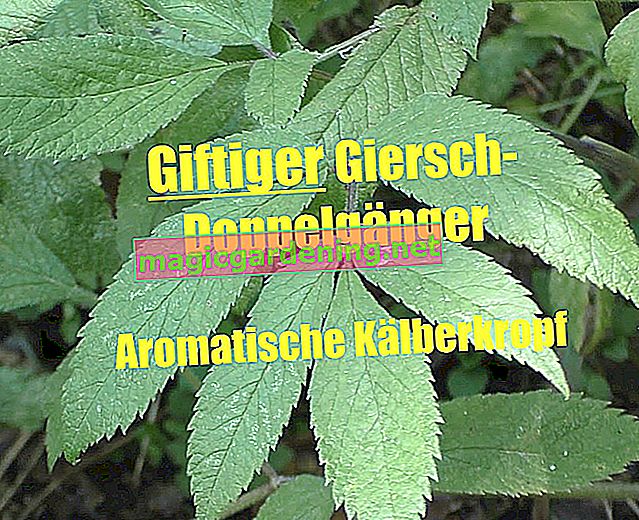 The leaves - the most distinctive feature

The most distinctive feature of the ground elder are its leaves. They are divided into a petiole and a leaf blade. The stem becomes up to 20 cm long and the leaf blade is divided into three leaflets.

The individual leaflets are blue-green to medium-green in color and hairy underneath. The top is bare. While the shape of the leaflets is ovate-elongated, their edge is jagged and their end is pointed.

The flowers of the ground elder appear from May and can be present on isolated plants until September. It is difficult to distinguish the ground elder from other plants by its flowers alone. There are plenty of umbellifers that resemble it.

The flowers of the ground elder have these properties:

After the flowering period is over, the seed heads form. They do not look very spectacular with their initially green and later brownish color. In order to be able to correctly recognize the ground elder by means of its fruits or seeds, you have to look more closely!

The fruits are split fruits in two parts. These are about 3 to 4 mm long. They are egg-shaped and smooth. Visually, they are reminiscent of caraway seeds. The reason is that the ground elder is closely related to caraway.

Further features to be able to recognize the ground elder correctly

But that's not all. There are a few more features that you can use to identify the ground elder:

Where Giersch can be found in abundance - occurrence

Not only the exterior can serve as a key to identify it. The occurrence of ground elder also helps with the determination. These weeds grow primarily in hedges and bushes, in deciduous and mixed forests, on streams and river banks, on roadsides, in parks and gardens. It loves shady locations and nitrogenous, moist soils.

When you are almost 100% sure that the plant in front of you is not hemlock, dog parsley, or any other poisonous member of the umbelliferae family, you can take the smell and taste test to nail your determination.

The ground elder smells like a mixture of carrot and parsley when rubbed with the fingers. It is extremely tasty and it is not for nothing that it is also affectionately referred to as forest parsley. Its taste is reminiscent of parsley or spinach. It is spicy, aromatic and fresh. The flowers taste sweet and the fruits have an idiosyncratic spiciness.

Do not confuse with Bibernelle, Wild Carrot, Bear Claw and Co

There are some plants that look confusingly similar to the ground elder. This includes, for example, the elder. Its leaves resemble those of the ground elder when it shoots.

The Bibernelle and the Hogweed also have foliage that looks similar to that of the Giersch. The wild carrot forms flower umbels that look like ground grass. Remember this if you want to fight the ground elder!

Do not collect or recycle the ground elder until you have been able to identify it 100% correctly! He has many poisonous relatives and mix-ups are common.