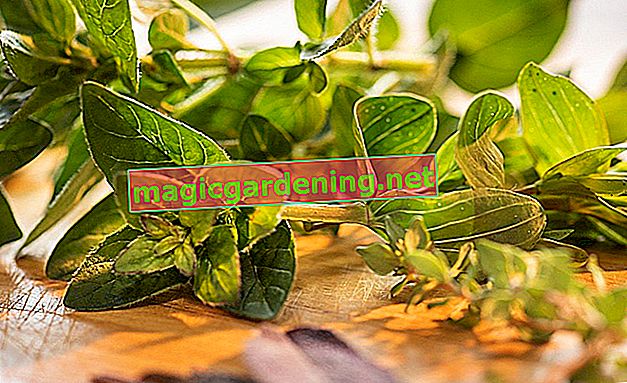 What is lava mulch?

Lava mulch is cooled, solidified lava. The pure natural material is created when liquid magma rises from the earth's mantle. This sometimes happens spectacularly as a volcanic eruption. On the surface of the earth, the volcanic product cools down rapidly and turns into a surface layer that is broken down and broken up into lava mulch. The result is a valuable natural product with these beneficial properties for the garden:

With a weight of around one ton per cubic meter, lava mulch is a real lightweight among the auxiliary materials in the garden. Breathable and inorganic are exactly the properties that natural gardeners want from an environmentally friendly problem solver in the bed. Find out where lava mulch is useful in the garden in the following section. Grain sizes from 8 to 32 mm open up a wide range of possible uses for lava mulch for the hobby gardener in his green realm. The following table summarizes the best ideas for knowledgeable and beneficial use:

Grain sizes from 2 to 8 mm are called lava granules. With this grain size, lava is an excellent alternative to road salt in winter. If unpaved work paths in the garden become slippery when it rains, lava granulate (€ 10.95 at Amazon *) is on hand as slip-resistant grit. Aquarists swear by lava granulate as a filter medium and substrate.

In direct comparison with classic bark mulch, lava mulch is clearly ahead. Lava mulch does not rot, does not smell and does not deprive the garden soil of valuable nutrients. The reason for the positive properties are inorganic, mineral components. In contrast, bark mulch is obtained from tree bark and is therefore one of the organic additives for the garden. This is associated with a limited shelf life. At the beginning of decomposition, bark mulch removes important nutrients from the bed, which can cause deficiency symptoms in young plants. The organic mulch material only fulfills its task as a natural fertilizer later. A musty smell is to be rated negatively. Furthermore, bark mulch offers voracious snails ideal framework conditions, whereas lava mulch is useful as a walking barrier.

Use in the garden - tips & tricks Lava mulch does not dissolve in pleasure within a few years like organic mulch materials. For this reason, crushed lava serves as an ideal top layer in the bed and as a planting base for ornamental and vegetable plants. The volcanic natural product keeps weeds under control, ensures permeable soil and prevents waterlogging. Correctly used as mulch, (213.00 € at Amazon *) lava keeps the soil moist and warm for longer. Grain sizes from 16 mm store the sun's rays during the day and give off the heat to your plants at night. Heavy thunderstorms do not wash away bed soil when lava mulch is on the spot. So that lava fulfills its tasks perfectly as mulch, planting base and path stabilization, important details are important:

The hobby gardener spends a large part of his time fighting weeds in the bed. With lava mulch, the workload shrinks to a bearable level. Dandelion, groundgrass, couch grass and the like have bad cards if you use lava as mulch like this:

Grain sizes of 8 mm, 16 mm and a maximum of 32 mm are well suited for permanent weed suppression. Only under deciduous trees is lava mulch against weeds not recommended because autumn leaves cannot be removed from it or with considerable effort.

Lava as a plant base With a grain size of 4 to 8 mm, maximum 16 mm, lava flowers, perennials and vegetables lie at your feet as an innovative planting base. Although the volcanic rock does not decompose, it releases small amounts of magnesium over time as a desirable contribution to lush green, healthy leaves. In order for the mineral natural product to make optimal use of its advantages, the following step-by-step procedure has proven to be excellent in practice:

It is advisable to proceed in this order. If you first spread lava mulch in the bed and then plant the plants, the lava grains are in the way. It is time-consuming to move the top layer away for each individual young plant in order to use the perennial properly.

Lava mulch to pave the way

In the near-natural garden and cottage garden, paved paths are not to everyone's taste. Bark mulch traditionally functions as a natural road surface. However, the organic material decomposes quickly and must be topped up regularly. This is where lava mulch comes into play, as a permanent, step-proof path paving. How to do it right:

A border is advantageous so that lava mulch does not spread in all directions as a path reinforcement. A demarcation is indispensable when paths with a lava layer border a lawn. If pieces of lava get between the cutter bars of the lawn mower, considerable damage is inevitable. Lawn edges, for example made of trendy Corten steel, are well suited and almost invisible. In connection with nature, you delimit the course of the route with wood as a mini palisade. Lava mulch trumps as an optical asset for imaginative garden design. The volcanic natural material is very popular as a top layer in the prairie garden. Lava harmonizes wonderfully as mulch with ornamental grasses and gives the representative front garden a permanently well-groomed appearance. Subtle colors make the natural material the ideal component for creative garden design. As a rule, lava is red-brown to gray when it exits the earth's surface. The composition and manufacturing process allow other colors such as anthracite, black, red and brown.

Splashing water worlds come into their own with lava mulch. If lava frames the fountain or other water features in the garden as a top layer, muddy, trampled earth is a thing of the past. A stable bank reinforcement made of lava grains makes maintenance work on ponds and streams much easier.

Calculate lava mulch amount - this is how it works

Using lava mulch in the garden is also a cost factor. Compared to conventional bark mulch, lava rock has higher prices. If you determine the exact quantity required with a sharp pencil, you will avoid anger and annoyance. The following brief instructions explain how to correctly calculate the amount of lava mulch:

Alternatively, you can call up a demand calculator on the Internet, enter the measured values ​​in the mask and receive the result automatically.

Balcony gardeners appreciate lava mulch in many ways. Excess irrigation water can run off quickly as drainage in the flower box. The substrate stays moist longer and does not become encrusted under a lava cover. Strawberries in flower boxes stay appetizingly clean with lava mulch.

Regardless of useful properties and diverse uses, lava mulch does not only come with advantages. The enthusiastic hymns of praise for the volcanic natural rock should not hide one or the other disadvantage. The following table compares the advantages and disadvantages of lava mulch:

In direct comparison, a higher price has to be paid for lava mulch than for bark mulch. In this context, of course, it should not be overlooked that lava as mulch can be bought once, whereas bark mulch has to be topped up at regular intervals. In addition, there has been a gradual rise in the price of bark mulch on the market since the material for combustion in wood chip heating was discovered.

Where can I buy lava mulch?

The increasing demand has brought lava mulch out of the niche for hard-to-get garden products. After lava mulch was mainly to be found at specialized building material dealers for a few years, most hardware stores and garden centers have now integrated lava into their standard range. Obi, Hornbach and Hagebau offer inexpensive lava mulch in various grain sizes and colors locally and online. Lagerhaus in Austria also has the natural product in its range. You can also consult Internet portals such as Amazon and Ebay to have lava mulch delivered directly to your home.

What is the difference between lava mulch and lava granulate?

The grain size makes the difference between buying lava as mulch or granules. Grains of 2 to 8 mm are usually offered as lava granules. The specialist trade calls lava mulch grain sizes from 8 to 32 mm. In the absence of clear DIN classifications, however, the boundaries are fluid. Above all, grain sizes from 8 to 16 mm are offered under both product names.

How much lava mulch per m² should be distributed in the bed for effective weed control?

Many years of experience in the garden have shown that a 6 to 8 centimeter thick layer of lava mulch reliably suppresses most weeds. When you calculate the required amount, it depends on the selected grain size. With a grain size of 16-32 mm, 0.08 cubic meters (= 0.09 tons) of lava mulch can be bought per square meter. Competent providers provide practical calculators for determining the quantity of lava in finer or coarser grain sizes, such as kiesdirekt.de for Germany or kieskaufen.at for Austria.

I was fed up with the red-brown lava mulch. How can I remove the top layer from the bed again?

Since lava mulch is a purely natural product, time-consuming disposal work is not necessary. To remove lava as mulch, simply work the grains into the soil. This has the particular advantage that the soil is loosened up and protected against waterlogging. Alternatively, rake up the volcanic mulch with the rake and remove seven crumbs of earth. If you need drainage for your potted plants in the future, you will already have the perfect inorganic material at hand.

For our garden we would like to buy lava mulch 16/32. What price should we expect if we need a ton of lava rock?

The specialist trade charges an average of 250 to 280 euros for a ton of lava mulch in a big bag. Big bags are delivered with a special lifting platform truck. Therefore, there are additional costs for shipping, which are usually not included in the purchase price. We determined these prices in online retail. Many years of experience have shown that local building material dealers and hardware stores have seasonal special offers that are not published on the Internet. Our tip for bargain hunters: Call regional providers of lava mulch before you order from national sellers and dig deep into your pockets. With a little luck, discounts of up to 50 percent can be obtained.

Is lava rock suitable as a mulch for all plants?

Lava mulch goes well with almost all plants that thrive in ornamental and kitchen gardens. Use lava rock under shrubs, flowers, conifers and evergreen deciduous trees as a floor covering for a neat appearance. Even in the vegetable patch, lava as mulch reduces annoying weeding to a minimum from a layer height of 6 centimeters. Only under deciduous shrubs and trees is lava mulch not recommended, because autumn leaves are difficult to remove.

Lava mulch is the ideal bulwark against snails. Pointed stones and sharp-edged grains are an abomination to the voracious pests. If voracious nudibranchs seek your flowers, shrubs and vegetables, cover the ground with lava mulch. In practice, grain sizes of 8 mm to 16 mm, ideally combined with coffee grounds, have proven to be excellent.